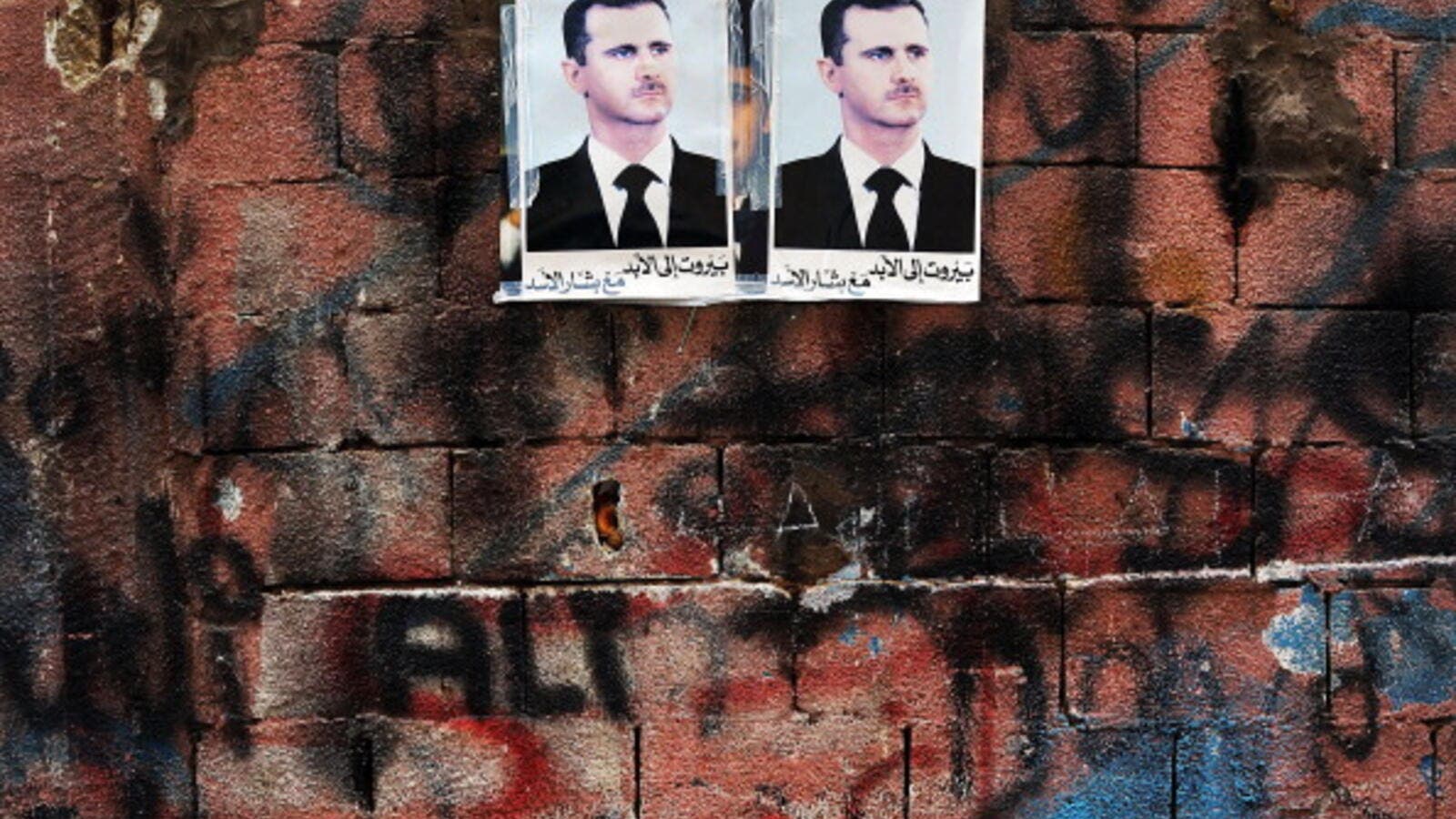 Syrian president Bashar al-Assad's picture hangs on a wall in a poor area of Beirut with a high concentration of Syrian refugees.

BEIRUT: The “Pepsi Center” lies in Akabieh, along the dirt road linking the southern city of Sidon to Sarafand. From its facade, the sizeable residential building and its convenient store – festooned with blue banners of the soft drink company from which its name derives – provides no indication of its current purpose, until one descends by staircase to the building’s subterranean warehouse.

There, huddled in the room’s dark and rancid corners, are 500 recently arrived Syrians.

It is in Akabieh, locals say, where prostitution among refugees is so widespread it is considered common.

With the numbers of refugees still growing, they fear the illicit practice will taint their mostly conservative Shiite community. The refugees in the area dismiss the allegations as the inventions of outside groups seeking to discredit them and sequester their aid money.

In between the rumors of rampant prostitution and the official documents confirming the arrest of perpetrators, are the social workers who emphasize that the phenomenon suffers from an egregious misrepresentation: These are not cases of prostitution, they contend, but “survival sex.”

“No one talks about this issue frankly,” said Mohammad Ghazal, a fieldworker with international relief organization Premiere Urgence.

“But we know it’s happening through our assessments,” he said, adding that the Akabieh building was a known prostitution hub.

“There are refugees there that have told us they do this for money.”

Most refugees, however, remain tight-lipped about prostitution.

In Akabieh, Syrian refugee Khalife Dubbie was adamant that no such practice went on under his watchful eye.

But Wassim, a Bisserieh municipality worker who provided only his first name, said he had been documenting the rise of prostitution in the area.

“There are Lebanese organizing such things who take women from Akabieh and distribute them along the streets of Khalde and the highways of Jiyye” where they pick up clients, he said.

The cars, bearing Lebanese license plates, typically pick up five to six refugee women at a time from the building, Wassim told The Daily Star.

“It’s a network,” he said, adding that prostitution had increased in the area in the past seven months.

And of course, he had heard of even grislier rumors, such as those security sources relayed to The Daily Star in February, of isolated cases where especially desperate refugees had exploited their wives and, on rare occasions, their own children.

While Wassim could confirm cases where individual refugee husbands in the area had offered their wives “out of their need to make a living,” he said he had not come across actual instances concerning children.

His concern, that prostitution would lead to the preponderance of other serious crimes, went unheeded when he called the local authorities.

“When I call the police about this, they don’t do anything,” he said, speculating that “the pimps might be protected by some powerful people in Sidon.”

At any rate, he said, “We need a special unit, a normal police patrol can’t control these crimes.”

The sensitivity of the issue, as tensions between Lebanese host communities and Syrian refugees continue to fester across the country, was not lost on the municipality worker.

“Please,” Wassim said. “Don’t portray them [the refugees] in a way that makes people think they are bad, or that they are not being taken care of.”

The subject of prostitution is already creating friction within the municipality, said Bisserieh Mayor Fadi Mshawrab, who receives complaints from the local residents.

“People here are religious, and they can’t accept these activities in their community,” he explained.

Many prostitution rings employing Syrians operate inconspicuously in residential apartments where neighbors are not well acquainted. The dismantling of an alleged ring in May, including four Syrian women and one Lebanese “madame” in Iqlim al-Kharroub, exposed how they typically function.

Umm Bilal, who lives in the building where the group was purportedly operating, said initially she didn’t really talk to to the alleged ring leader, Majida. However, she soon grew curious about the handfuls of women who would come to stay with her for extended periods of time.

“I asked her where the women were coming from,” Umm Bilal told The Daily Star as she folded her laundry outside the building. “She said they were her friends fleeing Syria.”

Suspicions rose further in the neighborhood due to the number of cars that would come by at night to pick up the girls.

The covert nature of human trafficking networks makes the delicate line between prostitution and sexual exploitation difficult to discern.

Gauging the nature of consent given and the circumstances surrounding a refugee’s decision to pursue sex work provides some indicators, as does the share of profit taken by the pimp. Nevertheless, for many, uncovering facts about human trafficking in Lebanon is like detecting objects in a fog.

Statistics compiled since 2009 by the Internal Security Forces’ Morals Protection Department indicate that Syrians are the overwhelming victims of human trafficking in Lebanon.

Col. Elias Asmar, head of the MPD unit, said he had not received any cases of trafficking among Syrian refugees despite having “heard a lot of rumors.”

Regarding prostitution, however, he said there was a growing trend.

“We can say that the numbers of victims are rising,” said Col. Asmar, “But at the same time, so are the number of offenders prosecuted.”

Some 26 perpetrators arrested were Lebanese, the statistics show, while just five were Syrian nationals.

The ISF has successfully dismantled trafficking networks since 2009, Asmar said, due to the secretive nature of the crime, but “it takes us longer to surveillance and to intervene.”

The most recent example of such work was in June, he said. In that case, Syrians were being brought to Lebanon under the pretext of being given jobs in restaurants and shops.

Normally, the unit is tipped off toby citizens, social workers and occasionally the media and then dispatches undercover officers to investigate.

Asmar said the ISF had managed to keep human trafficking in check and that his staff underwent regular training to be able to tackle the issue.

When The Daily Star asked Asmar why the municipality of Bisserieh was unable to reach out to police, he said they had not approached his unit.

Prostitution is outlawed by Article 523 of the Lebanese penal code. According to the law, only the consensual sex worker is punished in the event of arrest, not the client seeking his or her services.

“This is the law,” Asmar said.

Rumors of human trafficking – specifically in Sidon and Marjayoun – have also reached the UNHCR.

“It’s very difficult to come up with proof,” said spokesperson Dana Sleiman, “because people are reluctant to share information.”

Sleiman and other aid workers contacted by The Daily Star maintained that Syrian refugee women engaging in sex work could not accurately be called prostitutes. “You can’t call it anything other than survival sex ... these are people who are running out of resources,” said Sleiman.

“When she [a refugee] resorts to being a prostitute,” said Sahar Samhoun, a social worker based in the Bekaa Valley, “It’s because she doesn’t want to die, she wants to survive.”

The Syrian pound has lost 3⁄4 of its value since the crisis began, robbing the majority of Syrians of much of their purchasing power, a bleak reality refugees grasped when they converted their savings to Lebanese pounds.

For the Syrian refugees dwelling in at the Ouzai Center, a substandard building outside Sidon, such rumors were an insult, and served someone else’s agenda.

“They are spreading these rumors to take away our aid,” said the community’s leader Abu Mayssa, referring to the pro-Syrian regime elements operating in the country.

“People here would eat stones before selling their children or their women to traffickers,” he said.

Seeing the detrimental effects such rumors were having on the reputation of his community, Abu Mayssa even went to Sidon’s Grand Mufti Sheikh Salim Sousan about the issue, prompting the sheikh to apologize on behalf of the city.

“We came from Syria to preserve our honor,” said Mariam Ahmad Ali, who fled to Lebanon from Hama and now lives in the center. “Not to come here and sell it.”