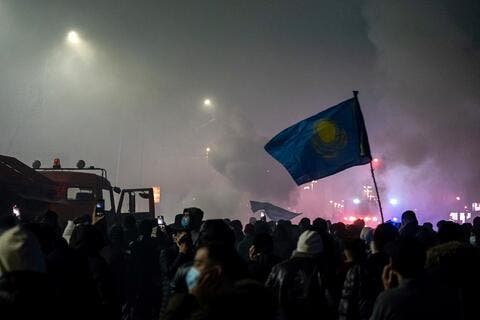 According to the Kazakh police, demonstrators tried to break into government buildings amid violent protests against oil prices.

On Wednesday, Kazakhstan President Kassym-Jomart Tokayev announced a nationwide state of emergency after protests over a fuel price hike developed into clashes between demonstrators and the police.

BREAKING: Reports that a number of protesters have been killed in Kazakhstan

On the other hand, at least 8 policemen were killed in the unrest, according to government resources.

Last night, the president announced that un-known terror group has dominated the airport and asked for foreign interference to restore the country's stability.

Peacekeepers from a Russian-led alliance of ex-Soviet states will be sent to Kazakhstan to help stabilize peace in Kazakhstan again. Tokayev appealed for help quelling protests that he said were being led by "terrorists", AFP reported.