The scene of this increasingly violent confrontation is the last "rebel enclave" in Idlib in northwestern Syria. Since the uprising against the regime of Bashar al-Assad in 2011, the province of Idlib has gradually become a gathering place for opposition forces, doubling its population to about 3 million inhabitants.

The area is dominated by various radical jihadist factions: More than 70 percent of the rebel enclave is under the control of Hayat Tahrir al-Sham (HTS), an Islamist faction that has been renamed several times and is derived from the infamous terrorist organization al-Qaida. In the west of the rebel area lies the sphere of influence of the Islamic Turkestan Party with fighters from Central Asia and Uighurs from China.

Turkish army is already opening 22 new military bases in Idlib this month, known as "observation posts", and has so far transferred more than 2,025 trucks, tanks, armoured vehicles and 6 500 soldiers to the neighbouring country, according to the London-based SOHR

The influence of the National Front for Liberation (NFL), which is an alliance of various Islamist groups at the instigation of Ankara, is limited to a few territorial islets. It is also this NFL that Ankara now wants to lead primarily in an offensive against the Syrian army. To this end, the Turkish army is already opening 22 new military bases in Idlib this month, known as "observation posts", and has so far transferred more than 2,025 trucks, tanks, armoured vehicles and 6 500 soldiers to the neighbouring country, according to the London-based SOHR. 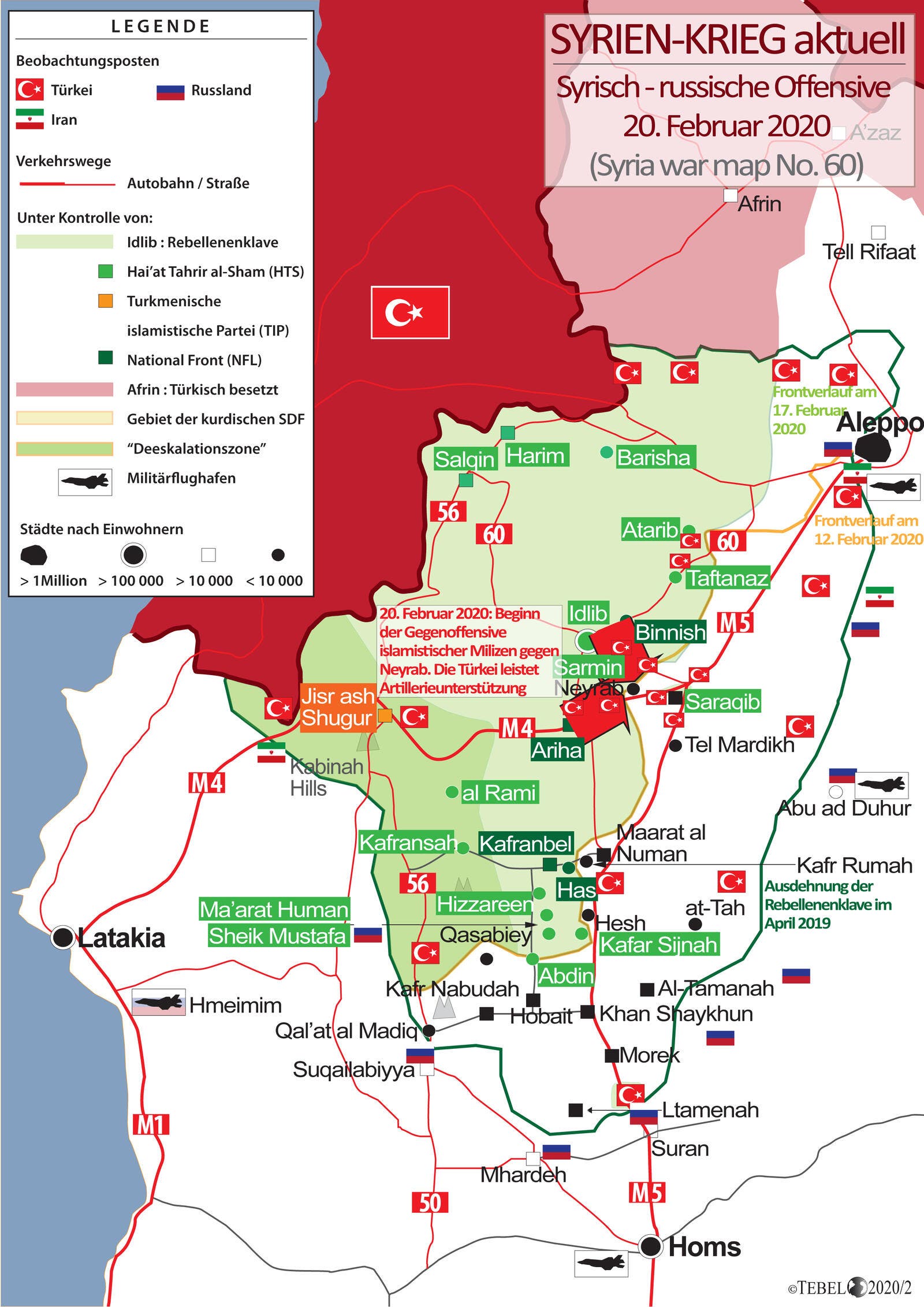 This development initially began with the dispatch of the first Turkish military convoys to block the Syrian army at the intersection of the two motorways with observation posts.

With the Syrian attack on one of these convoys, in which Turkish soldiers were killed, Ankara tightened its military strategy after February 3 and is now ultimately demanding the Syrians' withdrawal behind the 12 Turkish observation points, which have been in force since 2018, by the end of February, of which the majority are now encircled by the Syrian government troops.

Although Turkey puts its humanitarian concern for the inhabitants and internally displaced persons of Idlib at the centre of its argumentation, the timing of the Turkish threatening gestures speaks a different language: The Syrian army and its Russian and Iranian allies were able to break through the front line of the jihadists at the end of January, achieving large territorial gains in a few days and, after Ma'arat an Numan and Saraqib, also bringing the entire route of Syria's most important trade connection, the so-called "Aleppo Highway", under their control. This connects the capital Damascus with the economic centre of Aleppo.

At the same time, the Russian-Syrian success represents a considerable loss of political importance for Ankara in Syria: In the Sochi Agreement in September 2018 Vladimir Putin and Recep Tayyip Erdoğan agreed on a "de-escalation zone" in Idlib. The agreement provided for the creation of a 14-25 km wide and ring-shaped demilitarized zone around Idlib.

At that time, Turkey had committed itself to bringing the militant Islamist rebel militias behind this line and to opening up main traffic routes. However, the agreement was not followed by any significant action on the Turkish side, apart from the attempt to establish Turkish control over parts of the "rebel enclave" through the NFL.

The opening of these highway connections for trade is the (predetermined) official goal of a Syrian-Russian offensive, which has been underway since April 2019 with incessant artillery fire and bombardment of parts of the rebel territory, unleashing streams of refugees and leaving behind a lot of depopulated ruined cities before Syrian ground troops started their conquest.

The current developments are therefore highly explosive. On the one hand, the Turkish demonstration of power could force a new agreement with Russia on the status of the Idlib. The fact that the Syrian-Russian alliance has not conquered any further areas since the day before yesterday could speak for a first Russian-Turkish agreement. But it is also conceivable that Erdoğan, on the other hand, will resume a position of confrontation with Russia and will now seek greater closeness to the USA again.

The USA is also adopting the current situation as its own and, with speeches by the Secretary of Defense Mark T. Esper and James Jeffrey, is showing understanding for Turkey in order to drive a wedge between Turkish and Russian relations.

A Turkish rapprochement with the USA could thus ultimately lead to a further US-American concession on the "Kurdish question" or raise the price for a new Sochi agreement for Moscow.

The USA is also adopting the current situation as its own and, with speeches by the Secretary of Defense Mark T. Esper and James Jeffrey, is showing understanding for Turkey in order to drive a wedge between Turkish and Russian relations.

But one thing seems to be clear: Ankara's strategic plans should not be allowed to go too far. Ultimately, the question is whether Turkey can actually seek a military confrontation with the Syrian army and its Russian allies. Not least because numerous Turkish observation posts are surrounded by the Syrian army and neither Syria nor Russia are making any attempt to respond to Ankara's threatening military gestures.

On the contrary, it is almost unthinkable that Russia will simply abandon the successes of the last Syrian-Russian offensive. This means that exciting days lie ahead, which will ultimately revolve around one question: Do the opposing parties find a formula for Idlib in which both sides can save face, or is Erdoğan leaning too far out of the window this time.