Published May 31st, 2021 - 06:21 GMT
Demonstrators packed a stadium in the capital for the pro-government rally, chanting against the US sanctions and waving posters accusing foreign powers of interfering in Ethiopia's sovereignty. Amanuel SILESHI / AFP
Highlights
Protesters hold up photos of Turkish, Russian, Chinese leaders in praise

Hundreds of thousands of Ethiopians of all walks of life took to the streets to protest what they described as interference by the US administration.

In the capital Addis Ababa, the protesters filled the city's old stadium and the surrounding streets in a well-organized, peaceful demonstration dubbed Voices of Freedom and Sovereignty.

@AbiyAhmedAli supporters stage a protest against 🇺🇸 in #AddisAbaba to day with reason of #US opposed the ongoing #Tigraygenocied and asked to withdraw #Eritrea and #Amhara militia from #Tigray. The protests Trashed 🇺🇸 flag.@POTUS ,@VP, @SecBlinken ,@USEmbassyAddis pic.twitter.com/hnQrqJ5DpB

“We demand the US to rethink its stance on Ethiopia,” “We will never kneel down for external pressure,” "We elect our leaders,” and “It is my dam” were some of the messages displayed on placards at the rally.

The protesters in contrast displayed the photos of Turkish, Chinese, and Russian presidents in a show of praise and respect. 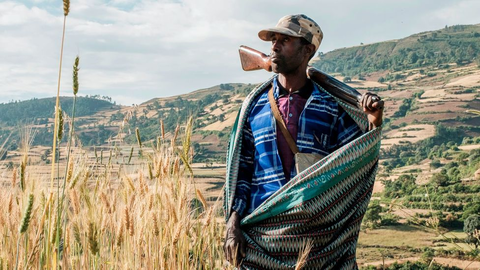 The US Imposes New Restrictions on Ethiopia, Eritrea Over War-Torn Tigray

#Ethiopia: A mass rally takes place in #AddisAbaba under the slogan of “Voices of Freedom & Sovereignty” https://t.co/LXax8a60hi pic.twitter.com/hxQKxSg5Vu

A rally will be held on Tuesday in front of the US Embassy in Addis Ababa where US citizens of Ethiopian origin will submit a written protest to the US ambassador.