Feature: A New Philhellenism? The Phenomenon of the Pro-Kurd Western Volunteers 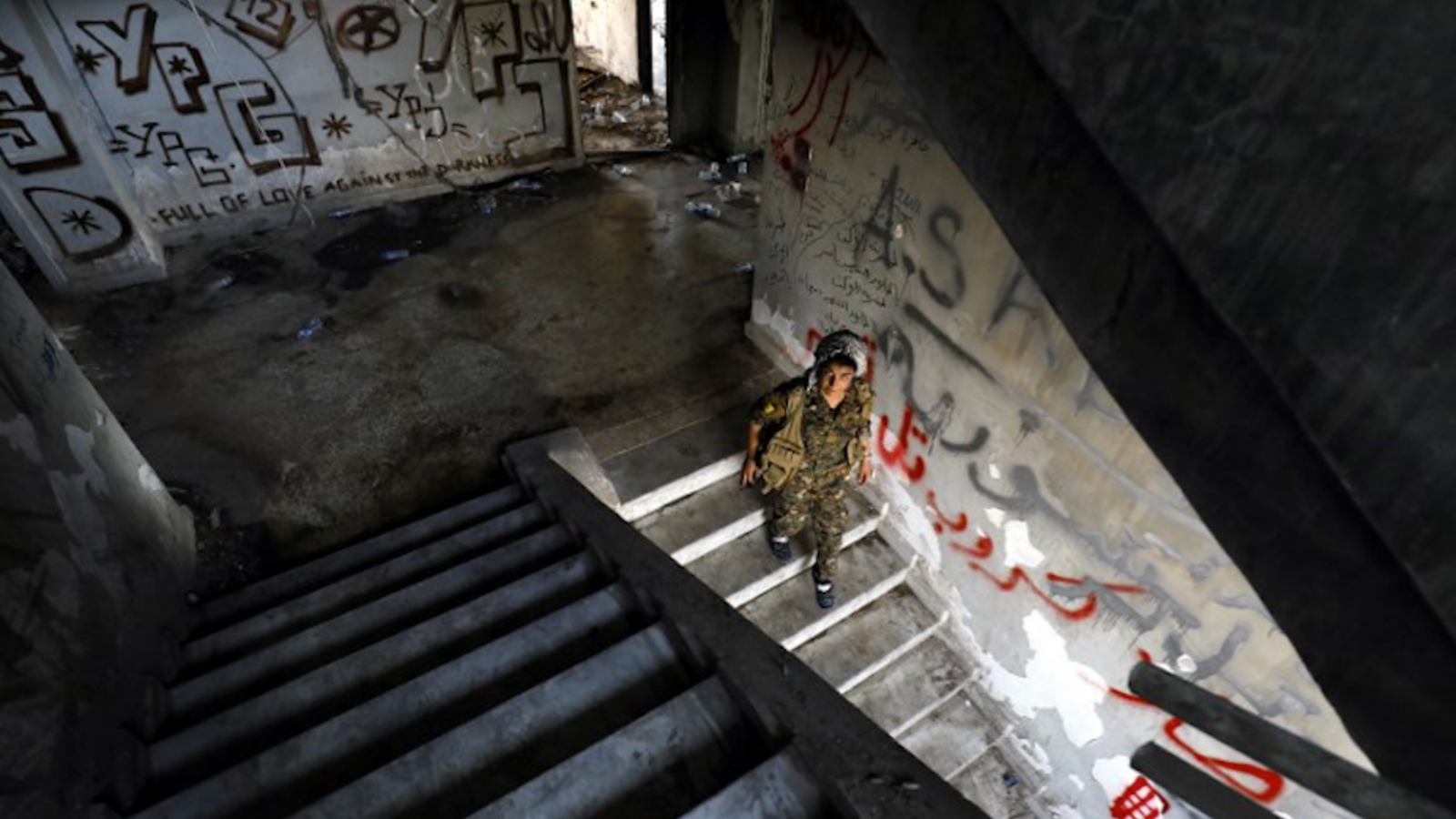 A female fighter from the Kurdish People's Protection Units (YPG) descends stairs in an abandoned building in Raqa's eastern al-Sanaa neighbourhood, on the edge of the old city, on August 13, 2017 / AFP

Hanna Bohman, Joanna Palani and Konstantinos Eric Scurfield. What do a former Canadian model, a former Danish political student and an ex-Greek-British Royal Marine have in common? Their Western ancestry and YPG, or “People’s Protection Units,” insignia. These three individuals represent a fraction of the over 400 volunteers with the YPG-dominated Syrian Democratic Forces who participated in the battle against ISIS in northern Syria. Scurfield died in 2015 in the fight against ISIS. A far smaller number of Westerners fight alongside the Peshmergas of the Iraqi Kurds.
Why did they join the Kurds of Syria and Iraq?

For the same reasons thousands of volunteers from all over Europe flocked to Spain in the 1930s and formed the International Brigades to fight Franco’s fascist army: a mixture of romanticism, anarchism and adventurism.

When did they start to rush to the battlefront in Syria and, to a far lesser extent, Iraq? In late 2014, just a few months after ISIS captured vast swathes of territory in Syria and Iraq in a summer blitzkrieg.

The genocide against the Yazidi Kurds and the Siege of Kobani, the so-called “Kurdish Stalingrand”, shocked public opinion across the West and prompted hundreds of volunteers (many of them Kurds from the significant diasporas in Europe) to travel to Syria (and Iraq) and fight against ISIS. They did this despite the warnings of the European state authorities for possible sanctions upon their return.

Their contribution on the battlefield is most likely negligible as the majority of them do not possess any military background. However, they offer invaluable services in two other ways: first, they raise the morale of the SDF / YPG and Peshmergas as they are viewed by the latter as the vanguard of the West’s awaited armies. Secondly, they raise awareness in the West about the Kurds – an otherwise ignored and stateless people.

These volunteers resemble in a way the Philhellenes, these liberal-minded middle-class young males (and sometimes romantic young aristocrats) from Western Europe who participated in the Greek War of Independence (1821-1830) since they were inspired by the cause of a new Hellenic statelet in the territories of an idolized Ancient Greece.

Although two centuries apart, the motives behind these volunteers’ actions are the same more or less: an abhorrence for the crimes against humanity in the name of jihad, an admiration for the struggle for national liberation by a whole nation (where women and even children actively participate in the armed struggle), the yearning for an extraordinary adventure in a foreign land, and the sense of a historical mission for the establishment of a homeland for a stateless and oppressed people.

However, the similarities between the Phil-Kurds (literally, “friends of the Kurds”) and Phil-Hellenes stop right there.

Indeed, the Phil-Hellenes, bestowed with a classical education, viewed the Greeks of the Ottoman Empire as the true heirs of Ancient Greek Civilization and felt an ethical obligation to free them from the tyrannical Islamic rule of the Sublime Porte. However, the 21st century pro-Kurdish volunteers do not share a similar reverence for the glorious deeds of Saladin or other historical Kurdish figures.

After all, Kurdistan as an independent entity that never existed even in medieval times: only the stillborn Treaty of Sèvres in 1920 envisioned an independent Kurdistan on the basis of Wilson’s idealism. Even the most ideologically-committed segment of these Phil-Kurds, the anarchists from the West, fight to fend off the “jihadism” of ISIS and the “imperialism” of the “neo-colonial powers” in the Middle East – not to lift up a stateless people.

Finally, the Phil-Hellenes were in fact a whole movement of the liberal middle and upper strata of Europe: civil society organizations were established in almost every capital of western Europe and advanced the cause of the Greek rebels in every way, renowned artists (such as the French painter Eugène Delacroix or the English poet Thomas Moore) increased the public opinion’s awareness about the revolt with their spirited works and even influential politicians (most notably, the British Charles Canning and the French Charles Nicolas Fabvier) strove to convince their governments to support the rebellion.

Even Lord Byron joined the war and died in it. And this grassroots movement ultimately succeeded in convincing their governments to overcome Metternich’s strong opposition and aid the Greeks militarily.

However, no individual of the magnitude of Delacroix or Fabvier has thus far emerged to advance the cause of the Kurds with the exception of a few academics – especially among the neo-conservative think tanks. No 21st century Lord Byron yet set foot in northern Syria and northern Iraq to partake in the armed struggle of the Kurds.

Byron’s death did not trigger the armed intervention of Russia, Britain and France in support of the Greek Revolution; it did, nonetheless, move the public opinion in Europe and bolster the position of the pro-intervention camp.

The intervention of the Great Powers of Europe occurred after the deaths of thousands of Philhellenes and was owed to a mixture of philanthropism and cold  geopolitical calculations; in contrast, the USA and other powers (e.g. Britain) intervened in support of the Kurds in September 2014, before the first volunteers from the West arrived in northern Syria.

Phil-Kurdism is still far away from Phil-Hellenism in terms of origins, influence and modus operandi. This, however, does not necessarily mean that the volunteers from the West have not and will not make a difference. It falls upon the governments of the West to make a real difference – just like they did in 1828 when they burned the mighty Turco-Egyptian fleet in southern Greece.

Dr Spyridon Plakoudas is Assistant Professor in Strategy at the American University in the Emirates. His research publications center on Insurgency, Counter-insurgency and the Kurdish Question.