Finsbury Park: Mainstream Media Don’t Want You To Read This

Published June 21st, 2017 - 10:29 GMT
The meaning of "Mainstream Media" often seems to depend on what side of the political aisle a writer or journalist belongs to.

Gotcha. As you clicked on the link which brought you to this article, you probably thought you had a pretty good idea of what “mainstream media” was (CNN, BBC, FOX...right?). The social media debate surrounding recent events in the UK has been awash with accusations of mainstream media bias. But how can it be that the so-called “mainstream media” is both Islamophobic and pro-Islamism at the same time? How can it be simultaneously committed to portraying Muslims in a negative light, while also covering up any crimes perpetrated by them?

Both during the course of, and in the immediate aftermath of, any major terror attack, social media proves to be a useful platform for the dissemination of vital information. How many have been killed or injured? Has the perpetrator been killed or arrested? Are my family and friends safe? But hang around for a few more minutes, and you’ll notice the tone of the social media buzz quickly changes.

In the case of Monday’s terror attack which targeted Muslims in Finsbury Park, the discussion surrounding so-called “mainstream media” has been fierce. Not only has the “MSM” been accused of not calling the incident a “terror attack” quickly enough, but it has also been accused of actually inspiring the attacker to carry out his rampage.

Numerous opinion pieces have since been published verifying or debunking those claims. Depending on what you want to believe, you can probably find evidence to prove that the “MSM” acted admirably or despicably in their reporting of the attack. This article (and this one) will tell you that the “MSM” was hypocritical, Islamophobic and thus responsible, to an extent, for inspiring the attack. This one purports to debunk those claims, and this one has an interesting section about the legal implications of calling the attacker a “terrorist”. Go ahead, tweet the article which best articulates your opinion and let it bounce around the echo chamber.

What is particularly interesting is that nobody seems to agree on what exactly the “mainstream media” is, and who exactly it is biased against. After the Finsbury Park attack, accusations of bias were thrown at the “MSM” by the Muslim community (including by the Finsbury Park mosque in statement), but also by far-right “Islamophobes”. 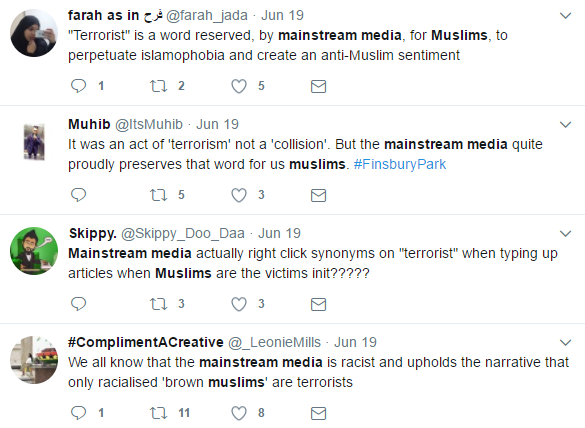 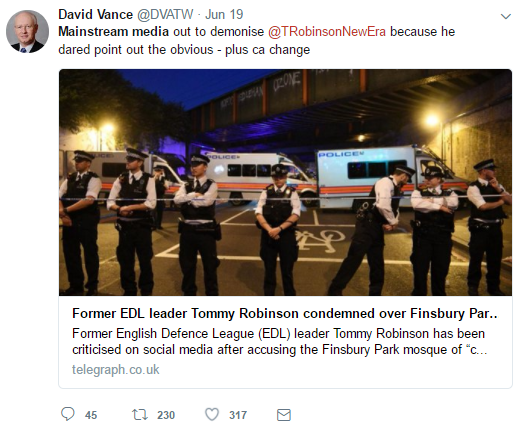 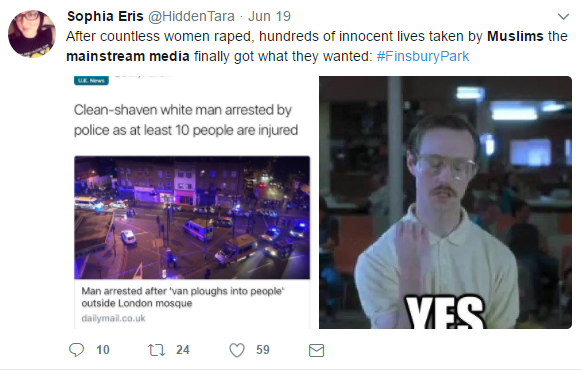 So how exactly could it be that the overlords at the “mainstream media” want to silence the bigoted Islamophobe, Tommy Robinson, while simultaneously demonizing Muslims and brushing anti-Muslim attacks under the rug?

Well, dislike for the so-called “mainstream media” is nothing new. In fact, it appears that for some, having a news outlet challenge their opinions and worldview (or say anything even remotely negative about them or their community), is enough to warrant an accusation of “mainstream media” dishonesty and hypocrisy. The fact that there is no universal editorial line in journalism does not seem to matter.

Those who use the term seem to consider the “mainstream media” as only the media they disagree with. And this phenomenon might not be a huge problem were it not for the fact that people have started mistrusting major media outlets so much that they would sooner believe what they see posted on conspiracy blogs. Take a look at the example below. With almost 40,000 shares, this fake news story ticks all the boxes: it accuses the “mainstream media” of a cover up and it appeals to one side in the love/hate Islam debate. 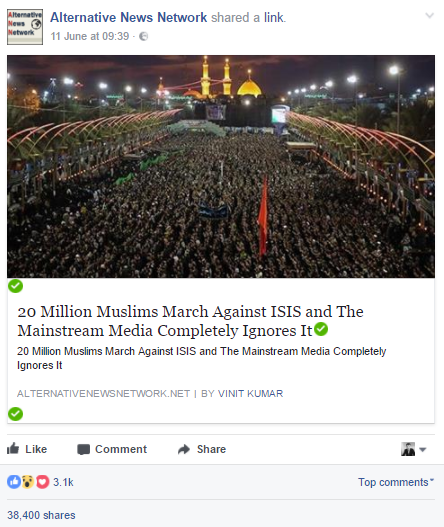 (They were actually performing the annual pilgrimage to Karbala, but that didn’t stop 38,400 people sharing this post...)

Distrust among Muslims (and their social/political allies) of the “mainstream media” (which presumably doesn’t include Al Jazeera, Salon, Slate, Huffington Post, etc) has led to many falling for fake news stories and furthering the narrative that the world is out to get them. In the wake of the horrific fire which killed over 79 people, many of whom were Muslims, posts such as those below were shared on social media. 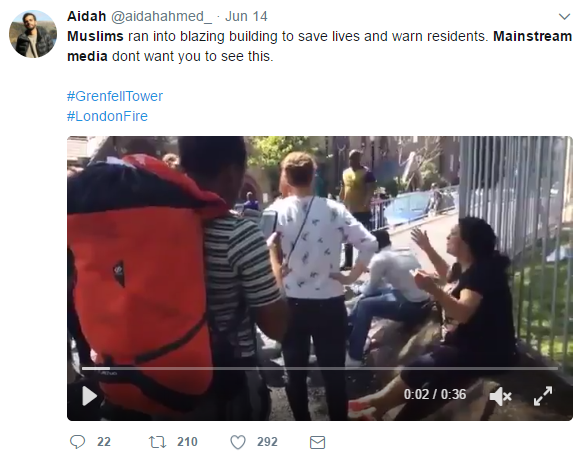 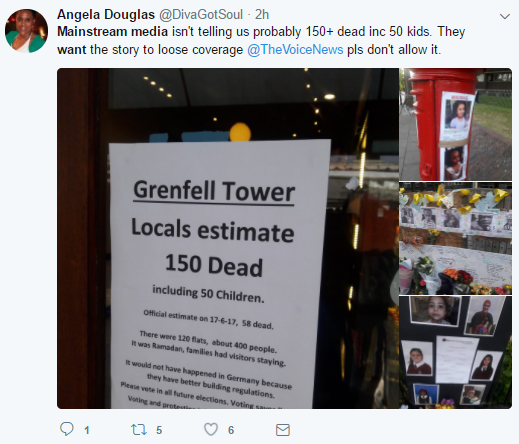 (“Mainstream media” actually wants the story to fade from our attention, apprently)

The Twitter users responsible for the above accusations seems to have forgotten that a huge number of media outlets are actually very keen to portray Islam in a positive light. So does that mean that “mainstream media” is simply the media which goes against a particular person’s narrative?

Let’s take a look at the other side - the anti-Islam camp. This group, mostly on the right-hand-side of politics, accuse the “mainstream media” of ignoring crimes allegedly perpetrated by Muslims and promoting tolerance of extremist Islam.

(Again, a major cover-up by the “mainstream media”)

The Islamophobes on the right are quick to accuse the “mainstream media” of being biased in favour of Islam, but again they ignore those major media outlets such as Fox News and The Daily Mail which are far from respectful or tolerant in their discussion of Muslims and Islam. Of course, the accusations surrounding “mainstream media” goes farther than just the debate about Islam; the recent shooting of a Republican politician in Virginia was also blamed on the “MSM” by some on the right. 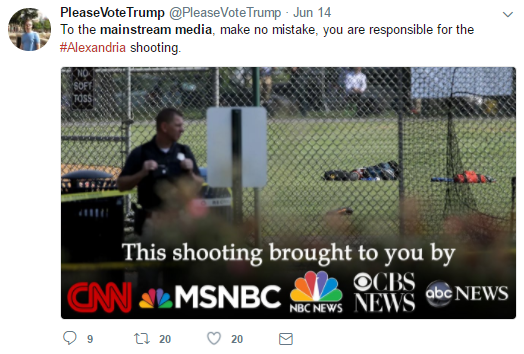 (At least @PleaseVoteTrump tells us exactly who the “mainstream media” are...)

The term “mainstream media” is meaningless. It is thrown about by those on both sides in a manner which suggests that the entire establishment is against them. It implies that the media outlets which confirm their worldview and opinions are actually not mainstream, but “alternative” (this is, of course, ridiculous, as it would mean that Al Jazeera and Fox News are “alternative media”, depending on which side you are on).

The confusion is perhaps best exemplified in the following Twitter debate which occurred in the wake of the Finsbury Park attack: 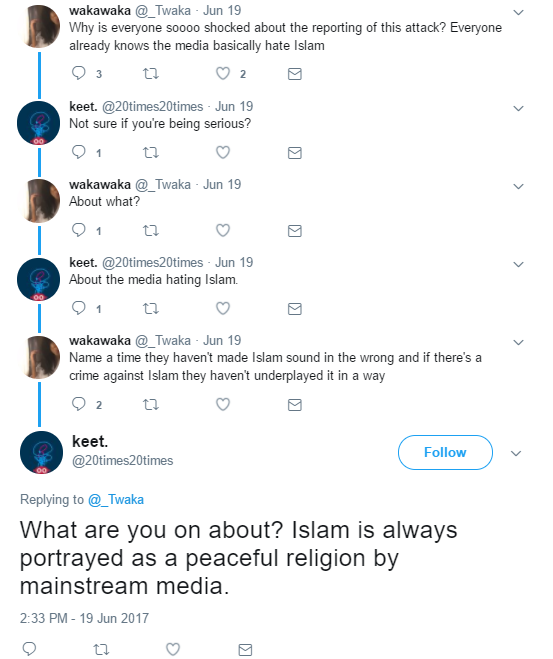