Published July 14th, 2021 - 06:40 GMT
Mekonnen Nega, member of a peacekeeping unit of the Amhara militia in Dansha, holds his gun as he is portrayed in his home in the city of Dansha, Ethiopia, on July 10, 2021. EDUARDO SOTERAS / AFP
Highlights
Tigrayan forces in refugee camp clash with Ethiopian forces.

Clashes have reportedly erupted between rival forces in a refugee camp in Ethiopia’s war-hit Tigray region. 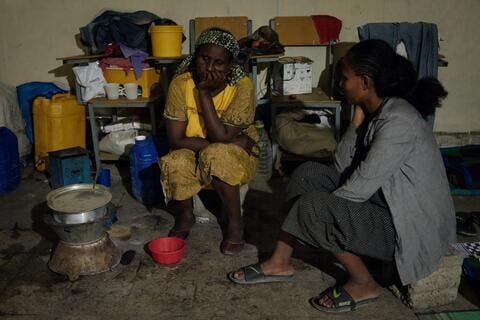 Fighting broke out in the Mai Aini camp housing Eritrean refugees between Tigrayan forces and Ethiopian soldiers and their allies in the Amharan special forces, humanitarian sources said on Tuesday citing witnesses.

There was no immediate word on casualties from the clashes, which come after Tigrayan forces announced a new offensive in south and west Tigray.

The claims come two weeks after the Ethiopian government declared a unilateral ceasefire in the face of major advances by the Tigray Defences Forces.

"Yesterday we launched an offensive in (the southern region of) Raya and were able to absolutely rout federal defence forces and Amhara special forces divisions," Getachew Reda, spokesman for the Tigrayan rebels, told AFP.

"We have been able to secure most of southern Tigray including Korem and Alamata (the main town in the area)."

He said fighting was also taking place in western Tigray.

The claims could not be independently confirmed and an Ethiopian military spokesman did not immediately respond to a request for comment, the agency said.

The Ethiopian government and the Tigray People's Liberation Front (TPLF), the northern region’s ruling party, have been locked in a deadly conflict since the central government sent forces to oust it in November.

Prime Minister Abiy Ahmed, who won the 2019 Nobel Peace Prize, said the move was in response to TPLF attacks on federal army camps, and declared victory within weeks.

But the fighting was reignited last month when the rebels launched a major counter-offensive that saw them retake their regional capital of Mekele.

The government then announced a unilateral ceasefire that the rebranded  Tigray Defence Forces (TDF) dismissed as "a joke." The commander of the Tigrayan forces later called for a negotiated ceasefire with the government and a political solution.

A senior UN official said last week that over 400,000 people have "crossed the threshold into famine" in Tigray, and appealed for urgent humanitarian action to help the millions affected by thel eight-month long conflict.