Fresh photos for Minneapolis police officer, Derek Chauvin, who killed George Floyd and sentenced to over 22 years in prison have emerged for the first time since he was placed behind bars last month. 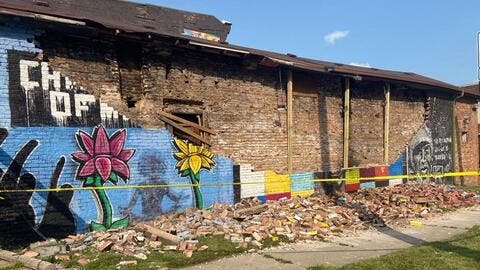 With good behavior, Chauvin could win supervised release for the final seven-and-a-half years of his sentence.

Derek Chauvin photos taken days after sentencing of 22.5 years. The murderer does not look like such a cocksure, tough guy now, does he? pic.twitter.com/2MEn8Fw1EQ

Chauvin has been at the facility - the only maximum security prison in the state - since he was convicted of second- and third-degree murder as well as second-degree manslaughter in April.

Minnesota prison officials said that while it was unusual to hold a convict at a maximum security prison before they are due to begin their sentence, it was done in Chauvin’s case for his own protection.

Typically after a convict is sentenced in Minnesota, they are brought to a lower-security facility, the Minnesota Correctional Facility at St. Cloud, for booking and processing.

From there, the inmates are then sent to a more permanent prison assignment.

The Department of Corrections, however, decided to keep Chauvin in his cell at Oak Park Heights for his own protection.

Chauvin remains isolated at the prison, away from the general population inmates.

'He was at Oak Park Heights for his safety pre-sentencing,' a state DOC spokesperson told Insider.

'Since he was already at Oak Park Heights and was going to stay there, it would have not made sense to bring him up to St. Cloud.'

Most state prisons have a unit to separate inmates from the general population for safety or security.

But Oak Park Heights has what the DOC calls Minnesota’s ‘most secure’ unit to separate individuals from others in the prison for disciplinary or security reasons.

Photos provided by the state show an empty cell in that unit has white cinderblock walls, slim rectangular windows, a metal toilet and sink and a thin mattress on a fixed bed frame.

Chauvin has been kept there for security since his conviction, alone in a 10 foot-by-10 foot cell that is monitored by corrections staff via camera and in-person checks.

He has meals brought to his room and is allowed out for solitary exercise for an average of one hour a day.

Department of Corrections spokeswoman Sarah Fitzgerald said Chauvin is allowed a maximum of 10 photos, a radio and canteen food.

He also can subscribe to periodicals and have three or fewer non-contact visits each week.

She said prison also uses a paid system that allows people to receive emails, which are printed out and provided to the recipient.

Fitzgerald said Chauvin returned to the unit at the maximum security prison following his sentencing in April.

She said his ultimate placement hasn't been determined, 'but his safety will be our predominate concern when determining final placement.'

With good behavior, Chauvin could get out on parole after serving two-thirds of his sentence, or about 15 years.

Cahill handed down the sentence of 270 months - the longest an officer has ever received for unlawful use of deadly force - on June 25 and granted Chauvin 199 days already served.

'This is based on your abuse of a position of trust and authority and also the particular cruelty shown to George Floyd,' Cahill said to the disgraced former cop.

Cahill also addressed Floyd's family, who had spoken out in emotional victim impact statements, telling them, 'I acknowledge and hear the pain that you're feeling.'

In addition to prison time, Chauvin is also prohibited from possessing a gun, ammunition, or explosives for the remainder of his life and is required also register as a predatory offender.

First images of Derek Chauvin in prison are released https://t.co/sAo0Fa60Jk

As a first-time offender, Chauvin had potentially faced 12-and-a-half years in prison, and the most serious charge that Chauvin was convicted of - second-degree murder - carries a maximum sentence of 40 years in prison.

The former Minneapolis officer was found guilty in April on all three counts for kneeling on 46-year-old Floyd's neck for nine minutes in May 2020.

In his sentencing memo, Cahill wrote: 'Mr. Chauvin, rather than pursuing the MPD mission, treated Mr. Floyd without respect and denied him the dignity owed to all human beings and which he certainly would have extended to a friend or neighbor.'

The sentencing came after Chauvin spoke briefly to offer the Floyd family his condolences.

Chauvin said he could not give a full statement because of additional legal matters, but said, 'There's going to be some other information in the future that would be of interest. And I hope things will give you some peace of mind. Thank you.'

There are still two federal indictments pending against Chauvin - one for violating Floyd's civil rights during the arrest that led to his death and one for assaulting a 14-year-old with a flashlight.