Published June 22nd, 2021 - 06:41 GMT
Vehicles queue-up at a petrol station in the Balamand area on the coastal highway linking Lebanon's capital to the country's north, on June 21, 2021 amid dire shortages due to an ongoing economic collapse. JOSEPH EID / AFP
Highlights
Lebanon will strictly enforce permit requirements for vehicles going into Syria to limit fuel smuggling.

Demonstrators blocked a highway connecting Lebanon and Syria on Monday with burned tires and metal bars, protesting a decision aimed at curbing smuggling into Syria. 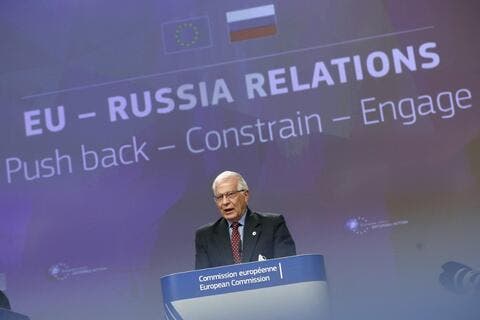 The EU Slaps Lebanon For Not Forming a Cabinet

Gasoline smugglers blocked the Masnaa crossing after security forces moved to prevent them from driving through the legitimate crossing.

Local media in #Lebanon reporting that Al-Masnaa highway [on the Lebanese Syrian borders] is blocked by smugglers because the authorities basically did not allow them to cross with smuggled fuel - this route is famous for fuel smuggling in the Bekaa. pic.twitter.com/ZifcHVBhQn

Amid worsening living conditions in Lebanon, some are filling up their cars with goods and fuel and traveling into Syria through the Masnaa crossing to sell them on the other side at double the price.

“The process involves paying bribes to pass into Syrian territory, so when the Lebanese side decided to prevent smuggling, the smugglers protested,” said a security source.

Protesters on the international highway demanded the process be applied to everyone crossing into Syria or be scrapped.

The Lebanese are still queuing for hours at gas stations to get subsidized gasoline, with a 20-liter canister of gasoline being sold for 44,000 Lebanese pounds ($29).

The shocking costs have led to citizens waiting at gas stations getting into fights.

One person was wounded from a fistfight that turned into a shooting in front of a station in Tripoli on Monday.

The minister of energy in the caretaker government, Raymond Ghajar, said a few days ago:

His remarks came amid indications that the substance will no longer be subsidized “at a certain point.”

He believes that the Central Bank would continue to provide support and would not leave the country in chaos.

“The easiest thing to do would be to resort to lifting subsidies on gasoline, even if the price of a canister becomes 200,000 Lebanese pounds, but who will secure dollars to cover the cost of import?”

He said: “If the process of securing dollars is carried out from outside the Central Bank, we would be in a hellish cycle of chaos.

“Should the central bank manage the import process, the pressure on the dollar market would be relieved and gasoline will be secured for the Lebanese even if it is at 200,000 Lebanese pounds per canister.”

Hammoud, however, said that if dollars are secured from the market, it would be catastrophic since a canister would be sold at 400,000 Lebanese pounds, and the dollar exchange rate would surge to 30,000 or 40,000 Lebanese pounds for $1, and another dark tunnel would be awaiting the Lebanese.

The state is gradually lifting subsidies without making public statements about the process, for fear of the situation imploding. However, the process could be made public once the subsidy card is approved, but the bill is still stuck in parliament.

The presidency of the caretaker government issued a statement on Monday on the matter: “The resigned government has completed the subsidy card bill, as well as the World Bank loan program to help needy families, and has developed many formulas to rationalize support.”

The presidency added it is “is awaiting parliamentary approval on the subsidy card to determine the appropriate formula, and is working to mitigate the repercussions of BDL’s decision to stop financing the import of gasoline, diesel, medicine and fuel for electricity, which we did not agree to without the subsidy card.”

In a statement, caretaker Prime Minister Hassan Diab’s government hit out at “the political impotence that tries to hide behind smoke bombs and throws the weights of its impotence on the caretaker government, to push it to violate the constitution.”

Diab’s government is already under criticism for doing nothing to confront the deep crisis in light of the failure to form a new government.

The process of forming the new government stumbled upon further obstacles following the stance taken on Sunday by the head of the Free Patriotic Movement, Gebran Bassil.

Visitors to the Lebanese President Michel Aoun quoted him on Monday as saying that he “still has hope that the initiatives would reach a solution in the presence of sane people, provided that the constitution and the powers of the presidency of the republic are not violated.”

They noted that Aoun accused “former Prime Minister Fouad Siniora of attempting to marginalize the presidency since 2005, as he allowed himself to organize the government’s agenda, hold sessions, and issue decisions, ignoring the presence of the president at the time.”

According to the visitors, Aoun also accused parliament of marginalizing the presidency of the republic because “it did not reconsider Siniora’s illegitimate decisions, and the presidency has become under the authority and tutelage of other leaders, with the resulting rampant corruption.”

Hammoud, meanwhile, refused to accuse the BDL and the banks of “gobbling up the money of the Syrian refugees.”

He added: “When dealing with refugee money, the BDL and the banking sector took different measures. 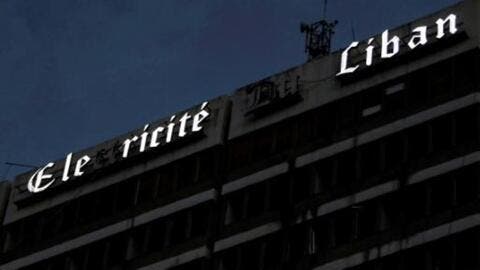 “Today, they receive their money at 12,000 Lebanese pounds for $1, according to the rate on Sayrafa, BDL’s official platform. This way, they stay fair to everyone and preserve the purchasing power of displaced Syrians.”