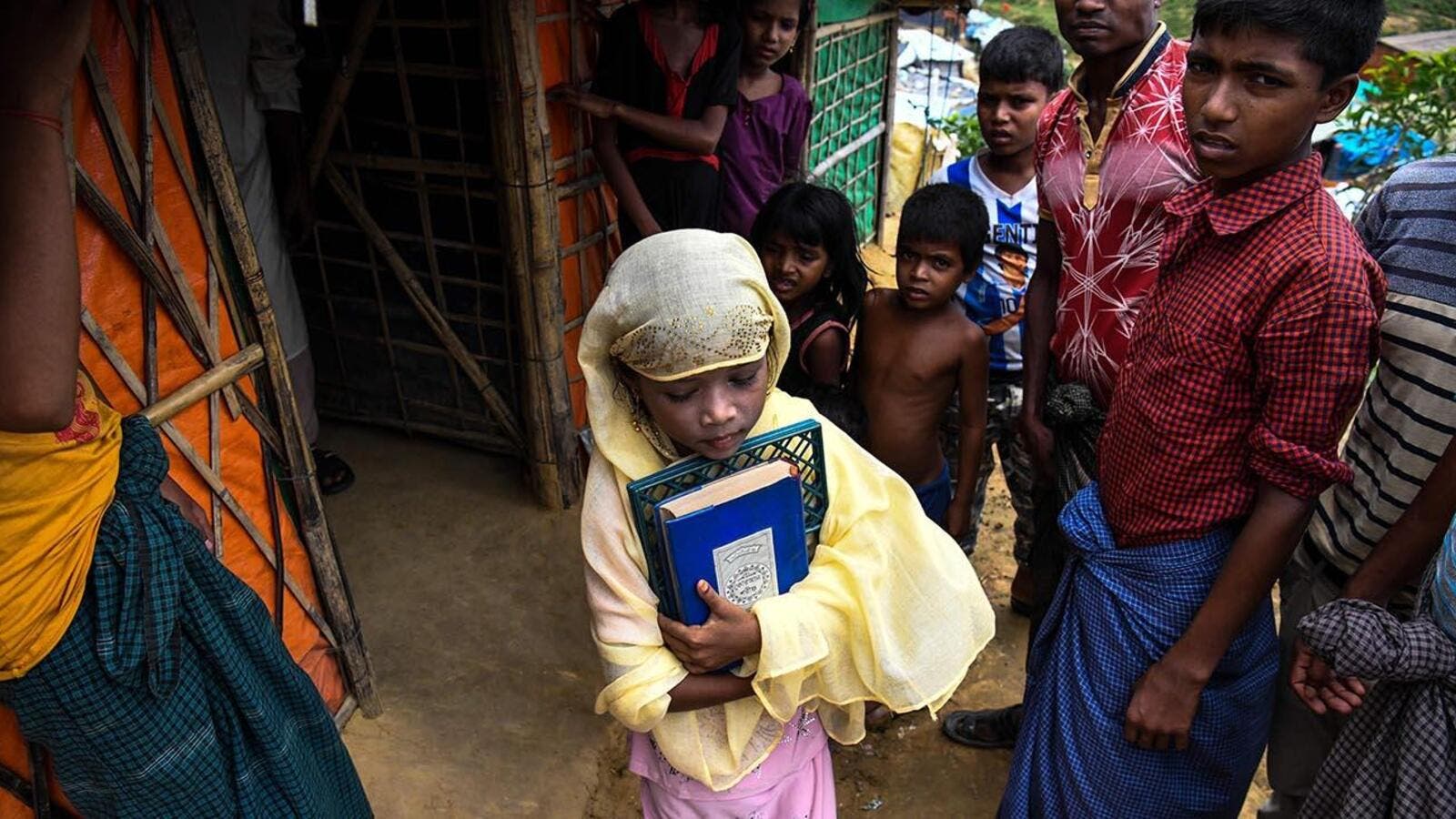 Saleema Khanam, 8, leaves her tent as she goes to a madrassa (Islamic seminary) for her studies in Kutupalong camp, in Ukhia near Cox's Bazar. (AFP)

A group advocating the cause of the persecuted Rohingya Muslims says a generation of the Muslims may be lost due to a lack of education for children and the youth at camps for the displaced in Bangladesh and Myanmar.

The Burmese Rohingya Organization UK (BROUK) said in a report on Wednesday that in Bangladesh, authorities had prevented Rohingya youths from receiving formal education. Furthermore, Bangladeshi authorities had even banned the refugees from constructing any structure that might seem like a permanent school building.

The report, titled “The Right to Education Denied for Rohingya Refugees in Bangladesh,” said that as a result, most young people only had the option of attending informal learning centers run by civil society groups, it further said.

“Now more than ever, we need educated Rohingya who can act as leaders for the community, but as long as education remains severely restricted this will be impossible,” said Tun Khin, the president of the BROUK, adding, “We are facing the prospect of a lost generation.”

The Rohingya are considered the world’s most persecuted minority, attacked and driven out of their native Rakhine State in northwestern Myanmar in what United Nations (UN) investigators have said remains an “ongoing genocide.”

The Rohingya Muslims were subjected to a campaign of killings, rape, arbitrary arrests, and arson attacks by the military and Buddhist mobs in Rakhine mainly between late 2016 and August 2017.

The brutal campaign forced some 700,000 Rohingya to flee their homeland since August 2017 and seek refuge in neighboring Bangladesh. There, they are confined to squalid, overcrowded camps and face forced return back to Myanmar.

According to the BROUK report, international and local NGOs as well as community-based organizations have already set up educations centers in the 27 refugee camps for the Rohingya Muslims around Cox’s Bazar, a town on the southeast coast of Bangladesh, where all the refugees have been housed.

The quality of these educational centers depends on who is running them, it said, adding, however, that the classrooms are generally overcrowded and poorly resourced, with many of the learning centers located in the refugees’ own shelters.

The BROUK report further said that while aid groups had made “heroic efforts” to overcome the crisis, there had in fact been little long-term planning in relation to the education of Rohingya youths, while prioritizing primary over secondary education had created a shortage of opportunities for teenagers.

Meanwhile, small numbers of the Rohingya have also been languishing in internal displacement camps inside Myanmar since the outbreak of broader violence against them in 2012.

The report said that there, too, the Rohingya children and young adults have faced serious restrictions on access to schooling.

The Rohingya Muslims, who have lived in Myanmar for generations, are denied citizenship and are branded illegal emigrants from Bangladesh, which likewise denies them citizenship.