Published November 7th, 2021 - 11:57 GMT
Protesters hold posters depciting politicians like Markus Soeder (C) and Angela Merkel and journalist Claus Kleber (R) in prisoners' clothing and reading "guilty" during a demonstration of Germany's "Querdenker" (Lateral Thinkers) movement that emerged as the loudest voice against the government's coronavirus curbs, on November 6, 2021 in Leipzig, eastern Germany. (Photo by STRINGER / AFP)
Highlights
Police and protesters against Covid passports clashed during a rally in Leipzig

Shocking footage has emerged of German police spraying tear gas in the faces of protesters after they staged a rally against Covid passports. 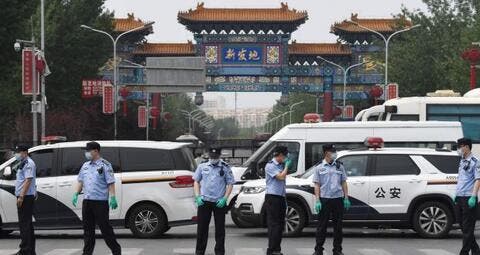 In Fear of Covid: China Tells Families to Stock up For Winter

Disorder broke out after 1,000 people began marching in the eastern city of Leipzig yesterday, with 24 arrests understood to have been made.

Large protests have taken place in France, Germany and Italy against Covid passports. The ones here are simply never reported by our free (Remainer) press.

Over 3,000 coronavirus deniers had originally pledged to take part in the rally in the city - the largest in Saxony - before authorities set a cap on 1,000 people.

But by morning, this number had already been reached and police struggled to control the crowds in the city centre.

A video shows the protest - which had been peaceful up to a point - become gradually more tense with angry shouts from the crowd.

All of a sudden, the scene in Grimmaische Straße descends into chaos - with several pushes and shoves before police and protesters begin jostling against each other.

Protesters can be hearding screaming as police then begin spraying tear gas among the crowd.

One man is seen being pushed by an officer as he staggers around disoriented from the spray.

Elsewhere, a woman with a bicyle cries out in pain after being caught in the middle of several volleys of spray.

Police said those who were arrested had been carrying banned objects, according to German news website DW.

From Monday, Saxony will be the first federal state in the country to implement the '2G' rule, which has angered protesters.

In Germany, the 2G rule means people must be fully vaccinated against Covid or be able to prove they have recovered from it, in order to visit pubs, restaurants and other indoor events.

Saxony currently has the highest Covid rate in Germany at 415.8 new infections per 100,000, as well as the lowest vaccine takeup with just 57 per cent of people fully inoculated, compared to 66 percent nationally, according to the Robert Koch Institute of Infectious Diseases.

Major protests have continued around Europe and the world against COVID passports.

Here’s some of the scenes from Germany. pic.twitter.com/uX5FteILEg

Stephan Kramer, head of the domestic intelligence agency in the eastern state of Thuringia, warned of increasing radicalization among anti-Covid campaigners.

'The fourth wave, the discussion about booster vaccinations and tightening of coronavirus measures such as the extension of proof of vaccination or recovery regulations can lead to a new impetus for the scene,' Mr Kramer told the Redaktionsnetzwerk Deutschland news group.

'We are experiencing online bullying, insults, physical attacks and ultra-aggressive behaviour all over the country.'

The video footage of the disorder provoked strong reactions when it was shared online. 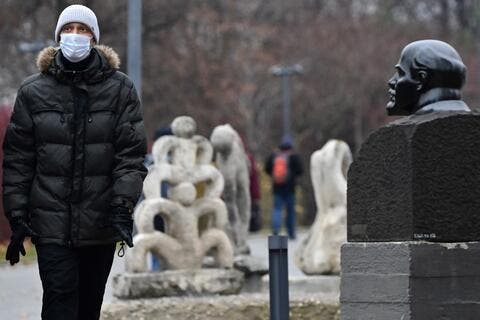 Jennifer Hies wrote on Twitter: 'I lived in Leipzig for two years. They are literally standing in front of one of the buildings that was destroyed during Kristallnacht and a block away from the St. Nicholai church where the people’s movement against the communist regime began. History repeats itself over and over.'

Elsewhere, Jules Lancashire tweeted: 'Oh my goodness. Summer 2018 I visited my eldest there during his Erasmus. I did a very informative free walking tour and gave thanks that I had never experienced what the East Germans had, nor never would. I’m very sad to say that now I know I was mistaken.'