Published January 25th, 2022 - 09:10 GMT
An Ukrainian Military Forces serviceman, caresses a dog in a dugout on the frontline with Russia-backed separatists near Gorlivka, Donetsk region on January 23, 2022. (Photo by Anatolii STEPANOV / AFP)
Highlights
Vitali Klitschko is an ex-world heavyweight boxing champion and Mayor of Kiev

Former world heavyweight boxing champion and Mayor of Kiev Vitali Klitschko has accused Germany of 'betraying' Ukraine over its support of a Russian gas pipeline and refusal to export arms to his country. 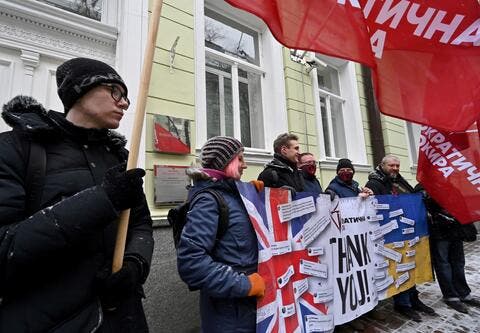 The ex-heavyweight champ today contributed a piece to German daily Bild in which he slated the German authorities for their 'failure to provide assistance and betrayal of friends' as tensions reach boiling point amid fears of a Russian invasion of Ukraine.

Klitschko's scalding of the German government comes on the same day as NATO announced it was putting forces on standby and reinforcing eastern Europe with more ships and fighter jets to prepare for a potential invasion.

'There is huge disappointment in Ukraine that the federal government is sticking to Nord Stream 2 and that it does not want to supply defence weapons,' Klitschko wrote in Bild.

'This is failure to provide assistance and betrayal of friends in a dramatic situation in which our country is threatened by Russian troops from several borders.'

Germany has long refused to export arms to conflict zones and is declining Ukraine's appeals for weaponry despite the escalating tensions.

Germany is also heavily dependent on Russia for its supply of gas, with up to 40 per cent of the EU nation's gas imports coming via Russian pipelines.

Russia meanwhile has denounced talk of a potential invasion and NATOs decision to reinforce defences in Eastern Europe as an 'escalation of tensions' and has denied any plans to invade neighbouring Ukraine.

Klitschko went on to say that Ukrainians are disappointed in Germany's apparent reluctance to help and accused German authorities of allowing 'Putin sympathisers' to take control.

'Many are asking: where does the German government actually stand? On the side of freedom and Ukraine? Or at the side of the aggressor?' Klitschko wrote.

'Clear signals are now needed from the most important country in Europe.'

'I lived in Germany for a long time and I still have many friends there. That is why it pains me particularly to see how Putin sympathisers have seized political control on many issues.

Klitschko's comments come after German Chancellor Olaf Scholz urged Europe and the United States to think carefully when considering sanctions against Russia for any aggression against Ukraine - a move which highlighted German dependence on Russia for gas.

'Prudence dictates choosing measures that will have the greatest effect on those who violate the jointly agreed principles,' Scholz was quoted as saying by the Sueddeutsche Zeitung newspaper on Sunday.

'At the same time, we have to consider the consequences this will have for us,' he added, saying nobody should think there was a measure available without consequences for Germany.

Russia recently completed the construction of Nord Stream 2 - a huge pipeline connecting the Eastern powerhouse with Germany which will supply 55 billion cubic metres of gas each year - but the US has urged the German government to scrap the £8 billion project should Russia decide to invade Ukraine.

Ukraine just slammed US for pulling diplomatic families from Kiev

Germany and France holding talks with Russia this week in Paris

Though the pipeline is not yet delivering gas, Scholz now finds himself in a very difficult position.

Should the German Chancellor put an end to Nord Stream 2 in support of Ukraine, it would severely damage relations with its biggest gas supplier and trigger a huge increase in wholesale gas prices throughout Europe.

'Germany is between a rock and a hard place,' said Marcel Dirsus, a fellow at the Institute for Security Policy at Kiel University.

'The Scholz government wants to keep the Americans happy because they are Germany's most important allies outside of Europe. But they don't want to annoy the Russians either. That's tough to do.'

Meanwhile, the Nord Stream 2 project was negotiated and approved by former German Chancellor Gerhard Schroeder, who became a member of the pipeline company's top brass after leaving office - a fact which Klitschko set upon in no uncertain terms.

'The billions that Russia has invested to buy German corporations, ex-politicians and lobbyists have paid off for Vladimir Putin.

'Germany should ensure that lobbyists like Gerhard Schröder are forbidden by law from continuing to work for the Russian regime,' Klitschko wrote.

NATO said on Monday it was putting forces on standby and reinforcing eastern Europe with more ships and fighter jets, and could also send additional troops to its south-east flank, in what Russia denounced as an escalation of tensions over Ukraine.

The move was a further sign that the West is bracing for Russia to attack its neighbour after massing an estimated 100,000 troops in reach of the Ukrainian border.

'We will always respond to any deterioration of our security environment, including through strengthening our collective defence,' Stoltenberg said in a statement.

He later told a news conference that the enhanced presence on NATO's eastern flank could include the deployment of additional NATO battlegroups.

'We are considering also to have battlegroups... in the southeast of the alliance,' Stoltenberg said.

So far, NATO has about 4,000 troops in multinational battalions in Estonia, Lithuania, Latvia and Poland, backed by tanks, air defences and intelligence and surveillance units.

Russia denies planning an invasion, and has cited the Western response as evidence to support its narrative that Russia is the target, not the instigator, of aggression.

The Kremlin accused the West of ramping up tensions by spreading 'hysteria' about war in Ukraine, with Kremlin Press Secretary Dmitry Peskov saying the probability of military conflict in eastern Ukraine being initiated by the Ukrainian side was higher than ever.

US officials said the Pentagon was finalising efforts to identify specific units that it could deploy to NATO's eastern flank. 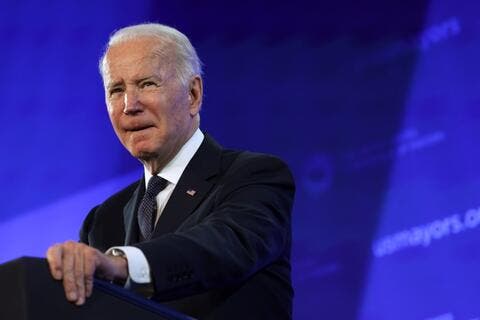 Biden May Send 50,000 Troops to East Europe Amid Ukraine Tensions

One of the officials said up to 5,000 could be deployed, while a NATO diplomat said Washington was considering gradually transferring some troops stationed in western Europe to eastern Europe in the coming weeks.

US President Joe Biden will hold a video call with European leaders later on Monday as part of the coordination with allies to respond to Russia's build-up on Ukraine's borders, the White House said.