Published July 18th, 2021 - 06:06 GMT
A damaged car is seen beside debris in Bad Neuenahr-Ahrweiler, western Germany, on July 17, 2021. Devastating floods in Germany and other parts of western Europe have been described as a "catastrophe", a "war zone" and "unprecedented", with more than 150 people dead and the toll still climbing on July 17, 2021 CHRISTOF STACHE / AFP
Highlights
Germany floods killed 98 people in Ahrweiler. 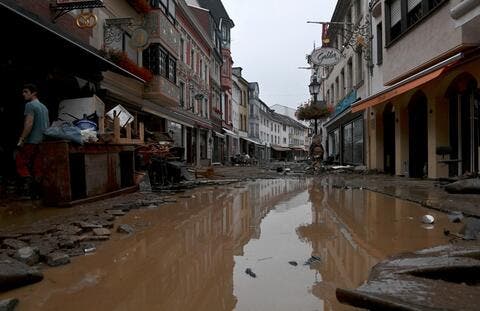 At least 98 people lost their lives in the hard-hit Ahrweiler district of the Rhineland-Palatinate state, the Koblenz Police Department said in a statement. It also reported 618 injuries due to floods.

The death toll was expected to rise as several villages in the western regions remained flooded after the historic deluge.

Rescue teams continued to search for and evacuate people to safer locations in the worst-hit areas.

Chancellor Angela Merkel is expected to visit the flood-hit region of Rhineland-Palatinate on Sunday, according to local media reports.

There was still no power in many places in the region, and telephone lines were not working while streets remained closed.

Several Turkish NGOs in Germany, including the Turkish-Islamic Union of Religious Affairs (DITIB), appealed for donations to help those hit by the disaster.

The flooding has also killed at least 27 people in Belgium so far, according to local media.

Prime Minister Alexander De Croo on Friday put the official death toll at 20 and said 19 people were missing, calling the situation "the biggest disaster our country has ever seen."

The country will observe a "day of national mourning" on Tuesday.

The heavy rains stopped on Friday in most of the eastern parts of the country affected by the flooding.

While flooding and overflow risk still prevails for some rivers, municipalities started to inspect areas where the water has receded.

Around 120 municipalities affected by the floods still have difficulty reaching many people stranded in their homes.

Here in Germany, dozens have died in floods, hundreds are missing, thousands have lost their homes. It's devastating. This is the climate crisis unravelling in one of the richest parts of the world — which for a long time thought it would be “safe”.
No place is “safe” any more. pic.twitter.com/ECtqpmlYi2

Speaking to journalists, von der Leyen expressed sadness and shock, adding: “We must find our way out together.”

“And Europe is helping: there are more than 170 rescue workers deployed with helicopters and boats. We activated the European Civil Protection Mechanism,” she said.

Pledging to seek support from the European Solidarity Fund at the European Commission, he added: “This should help the affected regions in the heavy reconstruction work that awaits them in the coming weeks.”