Giant Ship Ever Given May Now Leave Egypt After 'Snatch' Deal

Published July 6th, 2021 - 06:04 GMT
The stranded Ever Given container ship with an Egyptian tug boat in the Suez canal, Egypt, March 2021. Suez CANAL/AFP/Getty Images
Highlights
The authority has held the giant ship and its crew in a lake between two stretches of the waterway since it was dislodged on March 29 amid a dispute over a demand for compensation by the SCA

Egypt’s Suez Canal Authority (SCA) said a final settlement contract would be signed on Wednesday with the company that owns the Ever Given ship, and that participants would be able to watch the ship leaving on the same day. 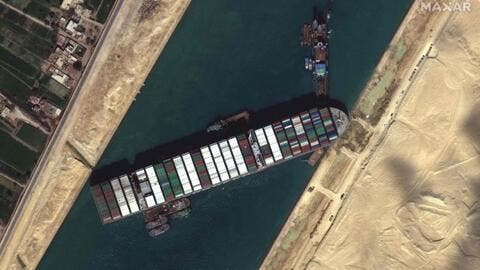 What's The Payoff? The Suez Authority Battles The Ever Given in Court

The owners and insurers of the container ship that blocked the Suez Canal in March said on Sunday that a formal settlement had been agreed in a compensation dispute, and the canal authority said the vessel would be allowed to sail on July 7.

The authority has held the giant ship and its crew in a lake between two stretches of the waterway since it was dislodged on March 29 amid a dispute over a demand for compensation by the SCA.

The Ever Given is finally leaving the Suez Canal after the ship's owner and the canal authority reached a deal on compensation. It'll sail out on Wednesday (and hopefully not get stuck again). https://t.co/xwWm2a2OAQ

A statement from SCA said the contract will be signed in the new Marina building, east of the canal, at 11 a.m. in the presence of its Chairman Lt. Gen. Osama Rabie, a representative of the ship-owning company and several ambassadors and international partners.

The Japanese-owned Ever Given had become stuck in high winds and remained wedged across the canal for six days, disrupting global trade.

Rabie confirmed that the Ever Given’s owners will present the authority with a gift of a 75-ton locomotive at Wednesday’s ceremony.

The chairman added in televised statements that the world is now talking about the achievement of the SCA for saving and floating the ship within a week.

A settlement has been reached to release the Ever Given ship that blocked the Suez Canal https://t.co/v6SZ5zrgly pic.twitter.com/ZddxW58ptv

The crisis alerted Egypt and the world to the importance of the canal, he added. 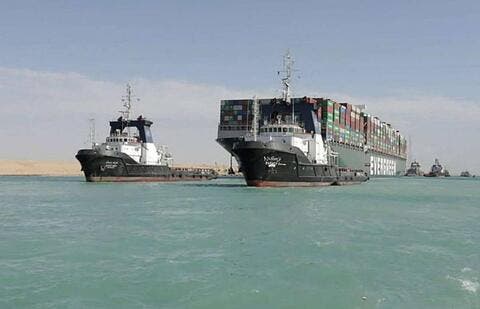 Will Egypt Free The Container Ship That Blocked Suez Canal?

The canal earned revenue of $3 billion in the first six months of 2021, up 8.8 percent compared with the same period last year, despite the Ever Given accident, Rabie said.

In the first half of this year, 9,760 ships passed through the canal, an increase of 2 percent from the same period in 2020.