Published August 16th, 2021 - 06:44 GMT
An injured woman is treated at a hospital in Les Cayes on August 15, 2021, after a 7.2-magnitude earthquake struck the southwest peninsula of the country. (Photo by Reginald LOUISSAINT JR / AFP)
Highlights
More than 5,700 people injured after 7.2 magnitude earthquake hit Haiti on Saturday, says civil defense agency

Haiti's civil defense agency said about 1,297 people lost their lives and over 5,700 were injured after a 7.2 magnitude earthquake struck the country. 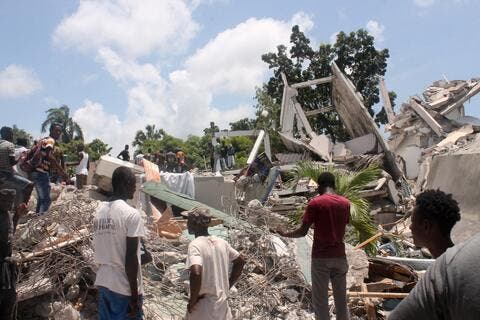 The epicenter of Saturday’s quake was 12 kilometers (7.5 miles) northeast of Saint-Louis-du-Sud at a depth of 10 kilometers (6 miles).

The US Tsunami Warning System issued a tsunami alert in the region warning that waves could rise 3 meters (9.8 feet). The alert was later lifted.

A magnitude-5.2 aftershock was felt and more aftershocks are expected in the coming days, according to the US Geological Survey (USGS).

Our search and rescue team has arrived in Port-au-Prince, and will join search operations in southwestern #Haiti as soon as possible. https://t.co/mcgXfP2sXM

According to official figures, 316,000 people died and 300,000 were injured in the magnitude-7.0 quake that occurred in the south of the country.

About 1.3 million people were left homeless in the aftermath.