Published October 6th, 2021 - 06:49 GMT
A Taliban fighter mans a machine gun mounted on a vehicle near the venue of an open-air pro-Taliban rally on the outskirts of Kabul on October 3, 2021. (Photo by Hoshang Hashimi / AFP)
Highlights
Corpses of three were reportedly hung from diggers after they were shot by man

Three alleged criminals were hung from diggers in Afghanistan by the Taliban militants in a new harrowing pictures released today show. 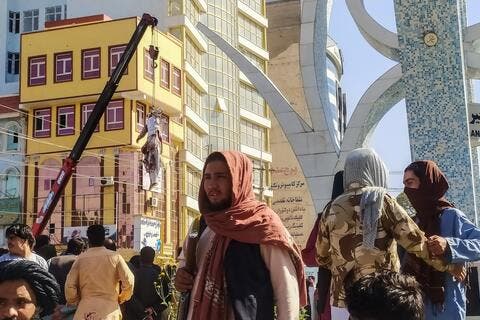 According to deputy governor Mawlawi Shir Ahmad Muhajir, the three men were killed by another man when they entered his home in Obe district in Herat province.

In the graphic images shared on social media, the corpses are shown publicly hoisted into the air and hanging by their necks from the raised arms of two diggers as people below watch on and take photographs.

Tuesday's gruesome publicly display is yet another example of the kind of practices that feed international concern that the Taliban have returned to their brutal ways last seen when they were in control of Afghanistan from 1996 to 2001.

This is despite the Taliban frequently insisting to the world that it has changed from the hard-line Islamic group that doled out brutal punishments to criminals and greatly restricted the rights of the country's citizens, particularly women and girls.

Dissemination of the images came as a rights group Amnesty International claimed Taliban forces unlawfully killed 13 ethnic Hazaras, most of them Afghan soldiers who had surrendered to the insurgents.

The 13 killings took place in the village of Kahor in Daykundi province in central Afghanistan on August 30, according to Amnesty.

Eleven of the victims were members of the Afghan national security forces and two were civilians, among them a 17-year-old girl.

Meanwhile, Boris Johnson's envoy met with the Taliban in Afghanistan today as part of an effort to prevent the country from becoming 'an incubator for terrorism.'

Sir Simon Gass, the Prime Minister's High Representative for Afghan Transition, met with terror chiefs in Kabul - the first summit since British forces evacuated in August amid chaotic scenes that defined the end of the West's backing of the country.

Mr Johnson has faced down fury from Tory backbenchers over the decision to sit down with the Taliban, who have executed dissidents, tortured prisoners and forced women into hiding since seizing power from the US-backed government.

Taliban leadership also met with Iranian officials in Kabul today in an effort to boost trade relations key to filling cash-starved coffers as the country teeters on the brink of economic collapse.

Taliban spokesman Bilal Karimi announced the meeting with the Iranian delegation on Tuesday.

They agreed to increase trading hours at the Islam Qala border crossing from eight hours per day to 24, better regulate the collection of tariffs and improve roadworks. Customs are a key source of domestic revenue for the country.

The aid-dependent country is grappling with a liquidity crisis as assets remain frozen in the U.S. and disbursements from international organizations that once accounted for 75 percent of state spending have been paused.

Meanwhile in Kabul, the Taliban said Tuesday they arrested 11 members of the Islamic State group, a rival and bitter enemy of the insurgents.

The Islamic State group's affiliate - based in eastern Nangarhar province - has claimed responsibility for a spate of recent attacks targeting Taliban forces in eastern Afghanistan and elsewhere.

Taliban spokesman Bilal Karimi posted on Twitter that the raid was carried out on Sunday night in the Afghan capital's Fifth Police District.

He provided no further details. The raid came just hours after a bombing that targeted the Eid Gah Mosque in Kabul, killing at least five people.

IS claimed responsibility for the mosque attack late on Monday, saying in a posting on its media arm, the Aamaq news agency, that one of their suicide bombers targeted senior Taliban figures following a mourning service.

Sunday's bombing was the deadliest attack in Kabul since the Taliban took control of Afghanistan with the chaotic departure of the last U.S. troops on August 31.

IS had also claimed responsibility for the horrific bombing on August 26 that killed more than 169 Afghans and 13 U.S. military personnel outside the Kabul airport, where thousands of people were trying to reach the airport to escape Taliban rule.

The world has been watching whether the Taliban would live up to their initial promises of tolerance and inclusiveness toward women and ethnic minorities, among them the Shiite Hazaras.

However, Taliban actions so far, such as renewed restrictions on women and the appointment of an all-male government, have been met with dismay by the international community.

Protests against the Taliban's policies toward women continued, with a demonstration Tuesday in a Kabul private school by female teachers and students who held up signs saying 'Education is a right.'

The protest was held indoors to avoid backlash from the Taliban, who have recently outlawed demonstrations held without permission from the government.

The U.N. children's agency continued to sound the alarm, saying a humanitarian crisis is imminent and warning that half of Afghanistan's children under age 5 are expected to suffer from severe malnutrition as hunger takes root amid serious food shortages.

'There are millions of people who are going to starve and there is winter coming, COVID raging, and the whole social system collapsed,' said Omar Adbi, UNICEF's deputy executive director for programs, during a visit to a Kabul children's hospital.

At the hospital, a woman named Nargis sat with her 3-year-old child who was suffering from severe malnutrition.

She had come from Kunar province in northeastern Afghanistan, where fighting between the Taliban and the Islamic State group has deprived communities of accessing basic needs, including food. Nargis declined to give her full name.

Amnesty's secretary general, Agnes Callamard, referring to the killings in Daykundi, said 'these cold-blooded executions (of the Hazaras) are further proof that the Taliban are committing the same horrific abuses they were notorious for during their previous rule of Afghanistan.'

#Taliban hanged dead bodies of 3 persons from a crane in Herat city in #Afghanistan, a gruesome display that signaled a return to some of the Taliban's methods of the past. pic.twitter.com/jg3cu6z03i

Hazaras make up around 9 percent of Afghanistan's 36 million people. They are often targeted because they are Shiite Muslims in a Sunni-majority country.

Taliban spokespersons Zabihullah Mujahid and Karimi did not respond to calls from The Associated Press seeking comment.

The rights group said Sadiqullah Abed, the Taliban-appointed chief of police for Daykundi, denied any killings had happened and only said that a member of the Taliban had been wounded in an attack in the province.

The Taliban took control of Daykundi province on August 14, according to the Amnesty report, and an estimated 34 former soldiers sought safety in Khidir district. The soldiers, who had government military equipment and weaponry with them, agreed to surrender to the Taliban.

Mohammad Azim Sedaqat, who led the group's surrender, arranged to decommission the weapons in the presence of Taliban members.

On August 30, an estimated 300 Taliban fighters arrived in a convoy close to Dahani Qul village, where the security forces members were staying, some with family members, according to Amnesty's report.

As the security forces attempted to leave the area with their families, Taliban fighters caught up with them and opened fire on the crowd, killing a 17-year-old girl named Masuma. One soldier fired back, killing a Taliban fighter and wounding another.

Amnesty said it verified photographs and video evidence taken in the aftermath of the killings.

Britain's Sir Simon Gass was joined in Kabul by the Charge d'Affaires of the UK Mission to Afghanistan in Doha Dr Martin Longden.

A Government spokesman said: 'Sir Simon and Dr Longden discussed how the UK could help Afghanistan to address the humanitarian crisis, the importance of preventing the country from becoming an incubator for terrorism, and the need for continued safe passage for those who want to leave the country.

'They also raised the treatment of minorities and the rights of women and girls.

'The Government continues to do all it can to ensure safe passage for those who wish to leave and is committed to supporting the people of Afghanistan.'

A statement on Twitter which appeared to be from a Taliban foreign affairs spokesman said: 'The meeting focused on detailed discussions about reviving diplomatic relations between both countries, assurance of security by IEA (Islamic Emirate of Afghanistan) for all citizens entering legally, and humanitarian assistance by UK for the Afghans.'

Abdul Qahar Balkhi said the UK delegation had said Mr Johnson was 'seeking to build relations with IEA while taking into account prevailing circumstances' while the Afghan side said the UK 'must take positive steps regarding relations and cooperation, and begin a new chapter of constructive relations'.

He said: 'We expect others to also not work towards weakening our government.'

It comes after Tory MPs last week raised concerns in Parliament that Britain should be wary of placing any trust in the Taliban.

He said it was 'absolutely clear' that Taliban fighters were already rounding up and killing Afghans who worked with the West in cities including Kabul, Kandahar and Lashkar Gah.

Mr Tugendhat said it was also evident that girls were being 'denied education' by the fanatics and women were being sent home from their jobs.

Fellow Tory Nus Ghani, who is working to get persecuted female MPs out of Afghanistan, said it was clear women would suffer under Taliban rule.

'I do not believe the Taliban have changed,' she added.

The Taliban has been in control in Afghanistan since the fall of the western-backed government in August.

Mr Wallace told a fringe event at the Conservative Party conference in Manchester: 'It is all interconnected and Afghanistan matters.

'Who popped up immediately as the US and Nato were leaving, but China, offering to invest in Afghanistan?

'That was about securing land routes to ports such as Karachi and also into Pakistan. 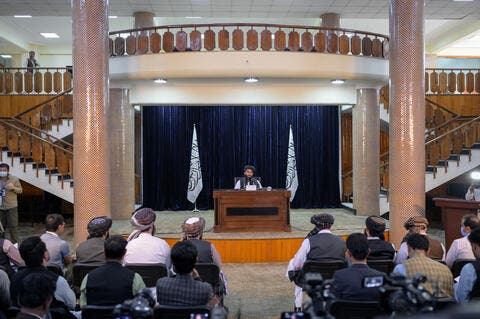 'It is all connected. The ripples from Afghanistan will be felt by al-Shabaab in Somalia, and of course al-Shabaab pose a threat to British interests in Kenya and to our friends in Kenya.

'The ripples of another superpower being portrayed as defeated by Islamic terrorism will be felt across the world.'