A Hoax! Britons Rally on London Streets Against Vaccine Rollout

Published May 30th, 2021 - 08:14 GMT
Covid-19 sceptics hold placards as they gather for a 'Unite For Freedom' rally against Covid-19 vaccinations and government lockdown restrictions, in Parliament Square, central London on May 29, 2021. Ben STANSALL / AFP
Highlights
Protesters gathered in Parliament Square on Saturday to protest against the UK vaccination rollout

Hundreds of people who claim the coronavirus pandemic is a hoax gathered in central London to protest against the mass vaccination rollout. 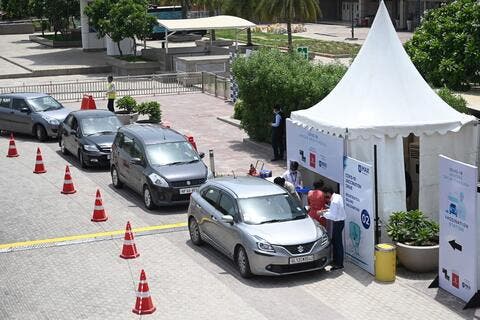 Protesters gathered in Parliament Square on Saturday at a Unite for Freedom rally with some claiming the pandemic is a hoax while others carried placards reading 'My body, my choice'.

Some held signs which read 'We do not consent', 'You have no power over us', and 'We're not guinea pigs'.

Violent protests have convulsed cities across Colombia over the past week, leaving two dozen people dead and hundreds injured.

Demonstrators are taking to the streets daily to protest widening inequality, a slow vaccination rollout and rising poverty. https://t.co/CIRt0cA3tv

This evening, a group staged a demonstration in the Shepherds Bush site of the Westfield shopping centre, causing 'significant disruption' for shoppers and leading to warnings from the police.

Met Police wrote in a statement on Twitter: 'The third demo is now at Westfield and is causing significant disruption to the local community and businesses, police are at the location.

'The MPS strongly urge those who are taking part in this demo to go home. Failure to do so may result in enforcement action being taken.'

It is thought many of the crowd travelled from outside of the capital to take part in the gathering.

Earlier today several people set off smoke bombs and one launched a firework in demonstrations around London.

One man, who did not give his name, said he had come to the capital 'because I want to be free and I want you to be free and the Government are lying to us.'

Another said she had attended because the press 'are lying to us.'

By lunchtime, the crowd had started to disperse and headed to Whitehall, with some walking to Trafalgar Square.

The protest comes just one day after Johnson and Johnson's single dose covid vaccine got the green light from the Medicines and Healthcare products Regulatory Agency (MHRA), three months after it was submitted for approval.

The vaccination will be available later this year.

The approval makes it the fourth coronavirus vaccine to be given the green light in Britain, following ones made by Pfizer, AstraZeneca and Moderna.

All of the other jabs currently being rolled out in Britain require two doses given at least eight weeks apart.

In April, the European Medicines Agency ruled that the jab should come with a clear warning about a serious blood clotting disorder. It made the same recommendation for AstraZeneca's jab.

Both vaccines have been linked to serious blood clots that have occurred alongside abnormally low blood platelet count, known as thrombocytopaenia.

Health Secretary Matt Hancock said it was a 'further boost to the hugely successful vaccination programme, which has already saved over 13,000 lives'.

He added: 'It means that we now have four safe and effective vaccines approved to help protect people from this awful virus.

'As it is a single-dose vaccine, it will play an important role in the months to come as we redouble our efforts to encourage everyone to get their jabs and potentially begin a booster programme later this year.'

Earlier this month, MailOnline reported that surge testing was being carried out in Bolton, Greater Manchester, and the London Borough of Hackney over concerns related to the Indian variant.

But, figures showed that most Covid-19 patients in Bolton hospitals alone had not taken up the offer of a vaccine and up to 10,000 vulnerable people had also still not been jabbed. 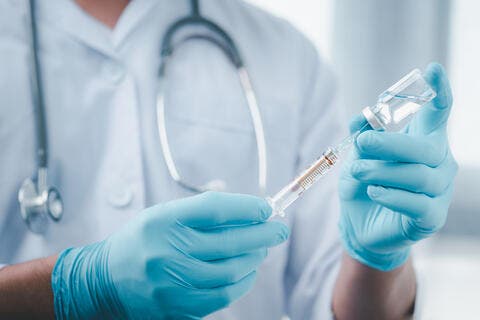 Pakistanis Over 19 Can Register For Covid-19 Vaccine

They cited reasons for refusing the vaccine including fear of needles, government conspiracy theories and concern over potential blood clots.

Prime Minister Boris Johnson has been urged by Tory MPs to not delay the roadmap to freedom on June 21  for the sake of people who have been offered a jab and refused.