“What we are dealing with is neither a news outlet problem, nor a news reporting problem; it’s a suspicious act of endangering national security. So, our action is not attacking press freedom,” Lam said in a press conference on Tuesday, days after police raided the daily’s office as part of an investigation into collusion with a foreign country.

Hong Kong police arrested five executives of the Apple Daily and Next Digital — the paper’s parent group — for colluding with foreign forces to endanger national security during the raid last Thursday.

Police said more than 30 articles published by the news media since 2019 calling for foreign sanctions against China and Hong Kong leaders violated the national security law.

Lam asked reporters not to “try to beautify these acts of endangering national security.”

She emphasized that those media outlets that have “intent to organize activities to incite the subversion of the government” are violating the national security law and that mere criticism of the Hong Kong government was not a “problem.”

“Media friends should have the ability to distinguish between them,” she said.

The founder of Apple Daily, tycoon Jimmy Lai, was remanded in custody for taking part in illegal assemblies while facing trial for endangering national security. The rest were freed on bail and were not charged. Some 18 million Hong Kong dollars (2.3 million US dollars) in assets related to the newspaper were also frozen. 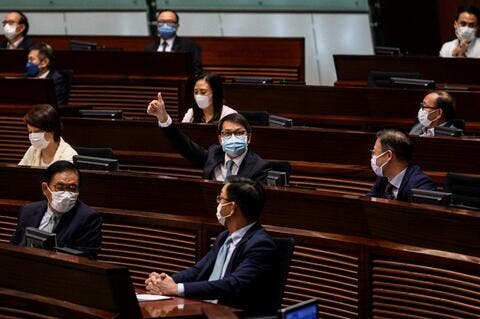 Next Digital board members have asked Hong Kong’s Security Bureau to unfreeze assets enough to pay its staff. Otherwise, the paper may have to shut down.