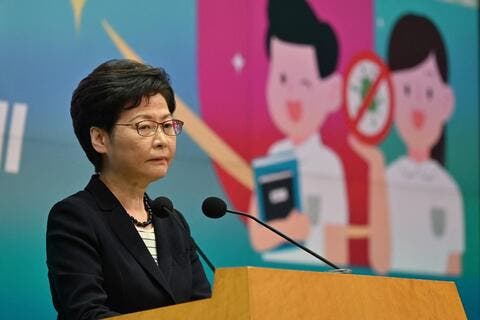 The paper will stop publishing online from midnight tonight with the final print edition running tomorrow, while the digital version will no longer be accessible after Saturday.

The end of the popular 26-year-old tabloid, which mixes pro-democracy discourse with racy celebrity gossip and investigations of those in power, has escalated alarm over media freedom and other rights in the Chinese-ruled city.

The paper's newsroom was raided by 200 police in August last year when owner and staunch Beijing critic Jimmy Lai was arrested on suspicion of colluding with foreign forces, and again by 500 police last week when five other executives were detained.

Pictures of police officers sitting at reporters' desks and footage of them loading trucks with journalistic materials have sent chills through the media in the former British colony.

'Thank you to all readers, subscribers, ad clients and Hong Kongers for 26 years of immense love and support. Here we say goodbye, take care of yourselves,' Apple Daily said in an article on its website.

It said the decision was 'based on employee safety and manpower considerations'.

The paper's publisher, Next Digital, said in a statement the decision to close the newspaper, which employs about 600 journalists, was taken 'due to the current circumstances prevailing in Hong Kong'.

Police cited more than 30 articles published by the paper as evidence of an alleged conspiracy to impose foreign sanctions on Hong Kong and China.

It was the freezing of assets that spelled the paper's demise.

The board of directors had earlier this week written to Hong Kong's security bureau requesting the release of some of its funds so that the company could pay wages.

The police operation against Apple Daily drew criticism from the UK, US and EU, which said Hong Kong and Chinese authorities are targeting the freedoms promised to the city when the former British colony was returned to the control of Beijing in 1997.

Chinese and Hong Kong officials have said the media must abide by the law, and that press freedom cannot be used as a 'shield' for illegal activities.

Chief Editor Ryan Law, 47, and Chief Executive Cheung Kim-hung, 59, were denied bail on Saturday after being charged with collusion with a foreign country.

Those three are still under investigation but were released from police detention.

Pro-Beijing newspapers Wen Wei Po and Ta Kung Pao published special pages on Wednesday, portraying Lai as a 'dog-like animal', a 'traitor' and a shoe-shiner doing the bidding of the United States.

Apple Daily has come under increasing pressure since Lai was arrested last year under the security legislation, which was introduced after months of at times violent pro-democracy protests.

BREAKING: Last edition of Apple Daily to print no later than Sat, as board forced to halt all Hong Kong operations https://t.co/GdvWm7cLIX pic.twitter.com/of4XPsSQns

Hong Kong and Chinese officials said press freedom cannot be used as a 'shield' for those who commit crimes, and slammed the criticism as 'meddling.'

In May, Reuters reported exclusively that Hong Kong's security chief had sent letters to tycoon Mr Lai and branches of HSBC and Citibank threatening up to seven years' jail for any dealings with the billionaire's accounts in the city.

A Hong Kong-based spokesperson for Citibank said at the time the bank did not comment on individual client accounts. HSBC declined to comment.

Authorities are also prosecuting three companies related to Apple Daily for alleged collusion with a foreign country and have frozen HK$18 million ($2.3 million) of their assets.

'We can't bank. Some vendors tried to do that as a favour ... and it was rejected.'

The newspaper has come under increasing pressure since owner and Beijing critic Lai, who is now in jail, was arrested under the national security law last August and has since had some of his assets frozen.

Police have said dozens of Apple Daily articles were suspected of violating the national security law, the first case in which authorities have cited media articles as potentially violating the legislation. 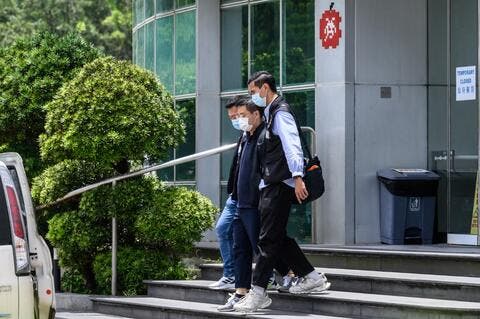 'After all this is said and done, the business community is going to look up and recognise that a man's company was gutted and stolen by a communist regime in Hong Kong,' he said.