How About Some Sanctions? Former Mossad Chief Tamir Pardo's Not So 'Revolutionary Plan' to Defeat Hezbollah in Lebanon 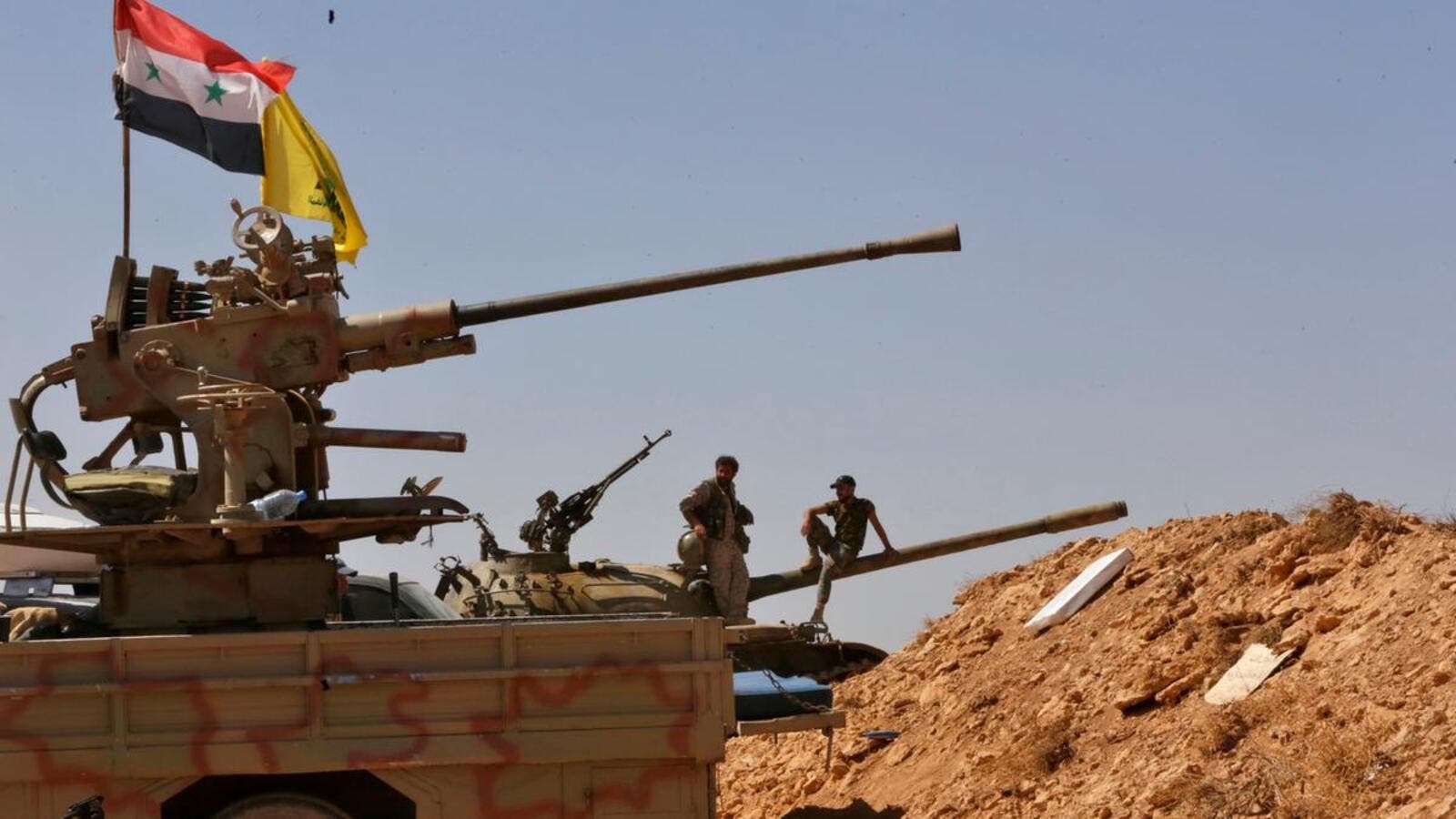 Syrian forces stand on a tank next to vehicles waiting to transport ISIL fighters away from Syria's Qalamoun region on August 28, 2017 as part of a deal brokered by the Iran-backed Lebanese group Hizbollah. Louai Beshara / AFP

Last week, the Jerusalem Post released an interview with the recently retired chief of Mossad, Israel’s infamous intelligence service. Tamir Pardo retired from Mossad in 2016, although he has only recently begun to give media interviews.

But from the very small number he has given so far, Pardo looks set to be a hawkish new voice in the media landscape. In his profile in the Jerusalem Post, Pardo explained that he has a plan for defeating Hezbollah, a plan that the Post’s headline trumpeted as “revolutionary."

It is no secret that Israel would like to see Hezbollah defeated – and given that the contempt is mutual, that’s hardly surprising. But Hezbollah is a complex creature, one that there will be no easy way to defeat. The Shia Islamist group has many faces. It is a political party, and a major provider of governance and social services in some areas of Lebanon. And it is simultaneously a vast militant group, with a troubling talent for embedding itself in civil wars across the Middle East.

From its inception during the Israeli occupation of southern Lebanon in the early 1980s, Hezbollah was nurtured by Iran, the primary Shia regional power, and the common antagonist of Israel. Again with Iran’s backing, Hezbollah is fighting in favour of Bashar al-Assad’s regime in Syria. The group’s leader Hassan Nasrallah said on their TV channel last week that Hezbollah was “stronger than ever," and that they would “very soon” be celebrating Assad’s victory in Syria.

The claim that the group is “stronger than ever” is probably correct. Politically, things are going very well for them. The May 2018 election gave Hezbollah a slim majority in the Lebanese parliament – just over half of the parliamentary seats. Given Lebanon’s complex parliamentary system, in which power must be divided between Christian, Sunni and Shia factions, this does not give Hezbollah outright domination of Lebanese politics. But it does mean that neither Prime Minister Saad Hariri, nor any other power blocs in parliament, can do much without Hezbollah’s support.

Not only does Hezbollah have tremendous sway over politics in Beirut. It has almost outright control over swathes of eastern and southern Lebanon, where it is the primary service and security provider. It is regularly described as “a state within a state”, not without justification. Indeed, former Mossad chief Pardo himself said in the interview that: “Lebanon is the only state in the world with a terror entity which has more raw power than the country’s army.”

One should not be naïve about what Hezbollah has done in the past, nor what it is capable of. It has up to 10,000 fighters in Syria, as well as an extensive arsenal of weapons. It has committed numerous terrorist acts across the world, and it calls for the destruction of the state of Israel.

Whilst many populations have suffered from its violence, it has a notorious record of attacking Jewish targets, in the Middle East and abroad. This included the suicide bombing of a Jewish community centre in Argentina in 1994, in which 85 people were killed. The group’s ongoing military misadventures are replete with human rights violations. If there were a way to reduce Hezbollah’s power, it could have huge benefits for regional security. The question is how, or if that could be done without destabilizing the Levant further. Tamir Pardo has a suggestion. The Jerusalem Post quoted him as saying:

“The ability to limit the Hezbollah threat with sanctions is 10 times easier than with Iran – and if [US President Donald] Trump would do it now, it would have a big effect on the Iran nuclear standoff… If Trump announces sanctions against Lebanon like he did against Iran, the Lebanese economy would not be able to last for more than three to four months. Lebanon is not Iran. It is a tiny nation which relies on the West and the Sunni moderate countries.”

Pardo also said in the interview that this was an infinitely preferable solution than a war between Israel and Hezbollah. He said that it was unrealistic to think that a war could be conducted against Hezbollah alone rather than Lebanon in general – if there were to be a war, he admits, it would be a disastrous one. He thus sees sanctions as the better alternative. Pardo conceded that though sanctions would hurt Christian and Sunni communities, the Lebanese government would surely cave quickly and force Hezbollah’s demise. The Jerusalem Post’s article reads:

“Even if only some aspects of the serious Trump sanctions on Iran were imposed on Lebanon,” he said this would be much more effective than a war against Hezbollah – if there was “a clear message that sanctions would only be removed if: 1) Hezbollah gave up its arms or was absorbed entirely into the Lebanese army, and 2) Iran has to withdraw its tentacles completely from Lebanon.”

True, it would probably be easy to persuade President Trump to sanction Lebanon. Trump has proven himself an enthusiastic – indeed over-enthusiastic– user of sanctions. He has also gone out of his way to upset Iran, and would probably be happy to do it again by going after Hezbollah. But if Pardo’s plan sounds too easy to be true, that’s because it is.

The Unintended Consequences of Sanctions

If sanctions are imposed, they will be unilateral American ones. No other parties to the UN Security Council – the body that would have to authorize global sanctions - would support the plan. More likely, they would fight it with everything they have. Europe is extremely anxious to avoid destabilizing another Middle Eastern country, for fear of triggering a new wave of refugees trying to reach their shores. Russia will not go after its ally in the Syrian conflict either.

This is not to say that American sanctions alone will not damage Lebanon – Pardo is likely correct in assuming that Washington’s sanctioning could devastate the small country’s economy. But the chances of that devastation translating into the results Pardo wants are very small. Without Hezbollah, Lebanon’s heads of government are weak. On their own, they would have nothing like the legitimacy to initiate action against the largest holder of parliamentary seats. There would need to be vast popular support behind an attempt to bring down Hezbollah if parliament were to try. This is apparently what the former Mossad chief is hoping for. His calculation is that sanctions would hurt the Lebanese people enough for them to demand Hezbollah’s surrender.

Far from this being a “revolutionary” idea, it is a strategy that Israel has used against militant groups before. And historically, the results have been far less than ideal. Raphaël Lefèvre, a non-resident scholar at the Carnegie Middle East Center and an expert on Lebanon told Al Bawaba:

“There is a longstanding belief in Israel that, if it makes whole populations pay for the deeds of militant groups, civilians will turn against them, and that this might play in Israel's favour. Israel has already tried the same policy of making Lebanese civilians pay the price for Hezbollah's actions in the 2006 war on Lebanon.

Was it a success? Hezbollah faced a degree of short-term pressure as many civilians died and much infrastructure was damaged but, in the medium and long-run, it gave the Shia group a status of hero because it was seen as effectively fighting the Israeli army, in the style of David against Goliath, if I may. Even if there were sanctions against the Lebanese economy now, it wouldn't necessarily trigger a popular backlash against Hezbollah - many Lebanese would rather blame 'corruption', the 'political class' or, even more, 'the US'.”

But even if we were to give Pardo the benefit of the doubt and take this thought experiment further, more serious problems become apparent. Even on the assumption that sanctions do cause a backlash against Hezbollah, it would be naïve to think that backlash would be unanimous among Lebanese. And however powerful the popular outcry may be, there is the inconvenient fact that Hezbollah’s military arsenal means it cannot simply be told what to do. Raphaël Lefèvre added:

“Economic sanctions would, of course, further polarize the Lebanese, accentuate the competition for resources, and this might in the medium run spill over into violence in parts of the country. But even if these clashes took the turn of a confrontation with Hezbollah, the Party has a strong enough base amongst the Shia and counts on enough allies in the Christian community and to a lesser extent the Sunni one to stave off any meaningful challenge to its military arsenal and monopoly over weapons.”

Pardo himself said in the interview that Hezbollah had “more raw power” than the Lebanese army. How he envisages popular pressure defeating that isn’t clear. But neither Hezbollah’s peaceful surrender to popular pressure, nor a straightforward military victory over them should they refuse to surrender, seem remotely likely.

There are more than enough good reasons to want to curb Hezbollah’s power. But punishing the Lebanese people, and risking the destabilization of another country in the region, is not going to yield any simple victories. It could instead risk something much worse.