How Will Biden Absorb The Anger After The Texas Shooting?

Published May 26th, 2022 - 08:47 GMT
US President Joe Biden wipes his eye prior to a signing ceremony in the East Room of the White House in Washington, DC, on May 25, 2022. Biden is expected to sign an Executive Order to advance policing and strengthen public safety. (Photo by Jim WATSON / AFP)
Highlights
US President Joe Biden held an address after a school shooting in Texas

Pressure was mounting on Joe Biden last night amid growing calls to crack down on US gun laws in the wake of the latest mass school shooting. 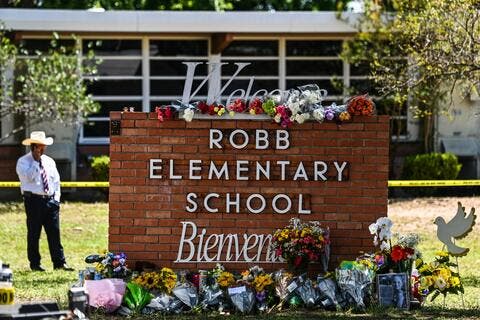 What Hints Did the Texas Shooter Leave Online Before The Massacre?

Xavier Lopez, 10. He was a 4th grader at Robb Elementary. His family confirms he died in today’s school shooting. pic.twitter.com/Qp2JatwZ4O

US officials said obtaining them from a store near his home in Texas was no problem for him and it was the ‘first thing’ he did when he turned 18 and was legally able to do so.

In a sombre address to his grieving nation in the hours after the massacre, the US President demanded that the country finally find its ‘backbone’ on the issue of gun ownership.

Leading the nation in mourning, a visibly distraught Mr Biden vowed to overcome the US gun lobby and find a way to tighten gun ownership laws to end the ‘carnage’.

Prominent US human rights lawyer Qasim Rashid called on Mr Biden to use his executive powers to enact tougher measures – and let the opposition take him to court.

‘Force the [Republicans] to litigate their barbaric view that terrorists should have easy access to guns,’ he wrote on Twitter. ‘We’re well past the time to act. Let’s get this done now.’

Last night Mr Biden said: ‘It’s time for those who obstruct or delay or block the common sense gun laws, we need to let them know that we will not forget.

The Texas shooting is the latest in a string of school massacres and came just ten days after a deadly rampage by an 18-year-old gunman at a supermarket in Buffalo, New York.

It is also the deadliest shooting at a US school since a gunman killed 26 people, including 20 children, at Sandy Hook Elementary School in Connecticut in 2012.

The Republican governor of Texas, Greg Abbott, appeared emotional as he announced the deaths of 19 children and two teachers on Tuesday.

But he has moved to ease rather than tighten controls, signing a wide-ranging state law last year that allowed Ramos to purchase his lethal weapons at 18, lowering the minimum age from 21 in certain circumstances.

And in October 2015, Mr Abbott chastised Texans because more guns were being bought in liberal California. ‘I’m EMBARRASSED: Texas #2 in nation for new gun purchases, behind CALIFORNIA,’ he tweeted. ‘Let’s pick up the pace Texans.’

The governor is also due at the annual convention of the country’s leading gun lobby, the National Rifle Association, in nearby Houston this week.

He is due to speak alongside Donald Trump and Texas senator Ted Cruz, who has already pushed back on calls for restrictions, saying people will use the latest shooting to attack the right of the people.

Attacking constitutional gun rights ‘is not effective in stopping these sort of crimes’, he added.