Published July 5th, 2021 - 06:38 GMT
There is no official information about the incident, and it is unclear what has caused the explosion or if anyone is injured. (Twitter)
Highlights
Video shows the huge explosion lighting up the night sky as fireball erupted

A huge explosion has ripped through an oil and gas field off the coast of Azerbaijan amid fears a rig or tanker has been destroyed. 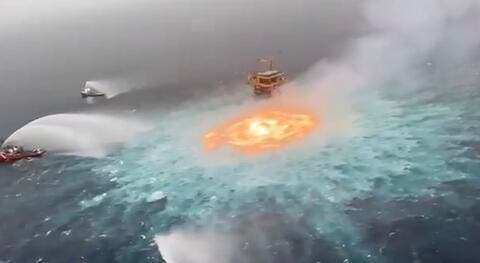 The blast is said to have occurred at the Umid gas field in the Caspian sea, according to local media reports.

A huge explosion rocks the Baku oil terminal of #Azerbaijan in the #Caspian Sea pic.twitter.com/KdVNCSljH1

Video footage, which was taken from a nearby oil platform, shows the huge explosion lighting up the night sky as a fireball erupted.

There is no official information about the incident, and it is unclear what has caused the explosion or if anyone is injured.

The State Oil Company of Azerbaijan Republic (SOCAR) had initially said in a statement that the explosion had been caused by a mud volcano.

But the company later edited their statement and deleted any mention of a 'mud volcano'.

SOCAR representative Ibrahim Ahmadov said in a statement on Facebook: 'No accidents have occurred on marine platforms and industrial facilities under the direct control of SOCAR, and the work continues in normal mode.

WATCH: Large explosion reported near oil platform in the Caspian Sea; officials say it may have been caused by a mud volcano pic.twitter.com/eqwNw110bF

'We will inform the public if there is any additional information.'

'At the moment, there is no official information about the incident.

'According to local media reports, the explosion allegedly took place at the Umid gas field.'