Published May 11th, 2021 - 07:28 GMT
Syrian migrants / refugees arrive from Turkey on boat through sea. (Shutterstock/ File Photo)
Highlights
However, between January 1 and April 21, no less than 359 people died, doing so, the IOM says.

More than 1,400 migrants arrived on the Italian island of Lampedusa at the weekend, media reports said Sunday. 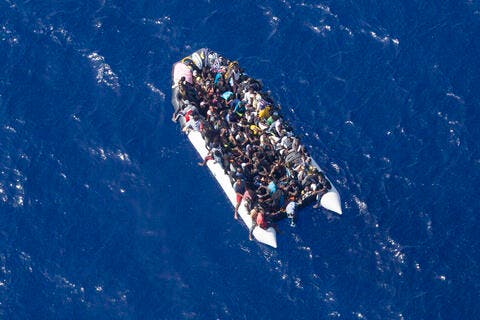 Some 15 boats came into Lampedusa from Saturday night onwards, Italian news agencies said,  one of them with almost 400 people of different nationalities on board, including 24 women and children.

Situation on Italian island of #Lampedusa 'explosive' after 2,000 migrants arrive in 24 hours https://t.co/bWJMjNq5uu

The first of the migrants arrived at 5 am, Lampedusa mayor Salvatore Martello told Sky TG24 TV at 5 pm. It was the biggest number of migrants to come ashore this year in a single day at an Italian port this year.

“I’ve said all you need is a day of good weather to see (all) these boats,” Martello said. He appealed to premier Mario Draghi to put migration on the agenda even though the government is heavily focused on guiding Italy’s economic and social recovery from the COVID-19 pandemic.

By late afternoon, at least nine full boats disembarked their passengers on the island, which has an initial processing centre for migrants coming ashore and requesting asylum.

Italian news reports said Italian coast guard and customs police boats escorted the vessels to Lampedusa after they were spotted in the Mediterranean a few miles offshore. The island, which lives off tourism and fishing, is closer to northern Africa than to the Italian mainland.

Italian authorities and international NGOs did identify the points of departure of the migrants boats. Hundreds of sub-Saharan Africans, Tunisians and diverse nationalities have streamed onto Italian shores from both Libya and Tunisia.

Tunisian authorities said Sunday they had stopped several boats trying to cross to the northern shore of the Mediterranean.  Unemployment, economic hardship and political instability are pushing many young Tunisians to try to emigrate illegally aided by traffickers and good weather.

A newspaper in Sicily, Il Giornale di Sicilia, said they arrived in wooden or metal boats. Many the migrants were reported to be from Bangladesh and Tunisia. Most of those reaching Lampedusa were men, but there were some women and children, including a newborn, the newspaper said.

Late spring, when the weather is generally good, has seen Libya-based migrant traffickers launch many unseaworthy vessels toward European shores. In recent years there have been surges in the number of migrant arrivals, either being rescued at sea, escorted by military vessels or sailing unassisted directly to Italian shores when seas are calm. In recent years, a few thousand migrants can be rescued at sea arrived on a single day.

“A meeting with Draghi is needed, with millions of Italians in difficulty we can’t think about thousands of clandestine migrants”, Salvini tweeted. He added that some 12,000 migrants have arrived so far this year, many in recent weeks.

The last few governments before Draghi have insisted, largely in vain, that fellow European Union nations take in more of the migrants that step ashore in Italy. Many, including those rescued at sea by charity boats, cargo ships or military vessels in the waters north of Libya, are economic migrants who are unlikely to be granted asylum.

Because Italy has so few repatriation agreements with countries whose citizens seek asylum, many of the arrivals wind up staying in Europe, some of them heading north from Italy to other countries.

The mass landings sparked calls from far-right politicians for action to stem the flow, amid fresh moves by Italian authorities against the rescue boats who operate in the central Mediterranean.

The arrivals were condemned by Matteo Salvini, leader of the far-right League party who is facing trial in Sicily for refusing to allow migrants to disembark while he was interior minister in August 2019.

“With millions of Italians in difficulty, we cannot think of thousands of illegal immigrants,” he said, demanding a meeting with Prime Minister Mario Draghi to discuss the issue.

Charity Alarm Phone meanwhile appealed for help to pick up five boats carrying more than 400 people in distress in Maltese waters, warning: “The situations on board are critical… Rescue is needed now!”

Italy is a prime entry point for Europe-bound migrants. More than half a million people have landed on its shores since the start of 2015, according to the International Organisation for Migration (IOM).

Fifteen boats packed with hundreds of #migrants lands on southern Italian island of Lampedusa; officials said they were expecting numbers to increase as weather improved. More than 1,400 got off at Mediterranean island, main landing points for people trying to get into #Europe pic.twitter.com/Vshg09XC3i

The stretch of water between Sicily and North Africa is also one of the world’s deadliest migration routes.

Numerous charity ships operate in the area, trying to save those who end up in the water after crossing in packed or leaky boats. Some activists accuse authorities of letting them drown.

But the NGOs in turn have faced accusations of colluding with Libyan migrant traffickers to bring people to safety on European shores, charges they strongly deny.

Judicial authorities in Sicily this weekend reinstated a detention order against the Sea-Watch 4 vessel, run by Germany’s Sea-Watch organisation, which had kept it in Palermo for six months until March, media reports said.

The order followed a safety inspection that found too many life jackets on board, saying the ship’s sewage system was insufficient for the potential number of people rescued. 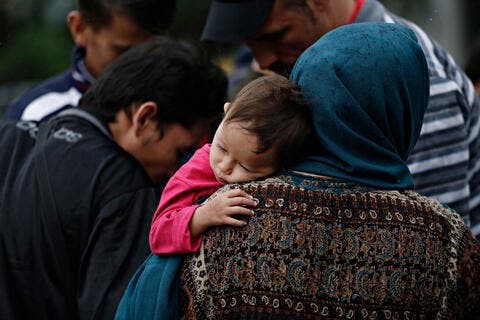 No at All Rosy! Tunisian TV Series Shows The Flight of Illegal Migrants to Europe

Activists claim the inspection was a smokescreen to block the ship.

Another vessel, Sea-Watch 3, was impounded by the Italian coastguard in March in the Sicilian port of Augusta, again over safety issues.