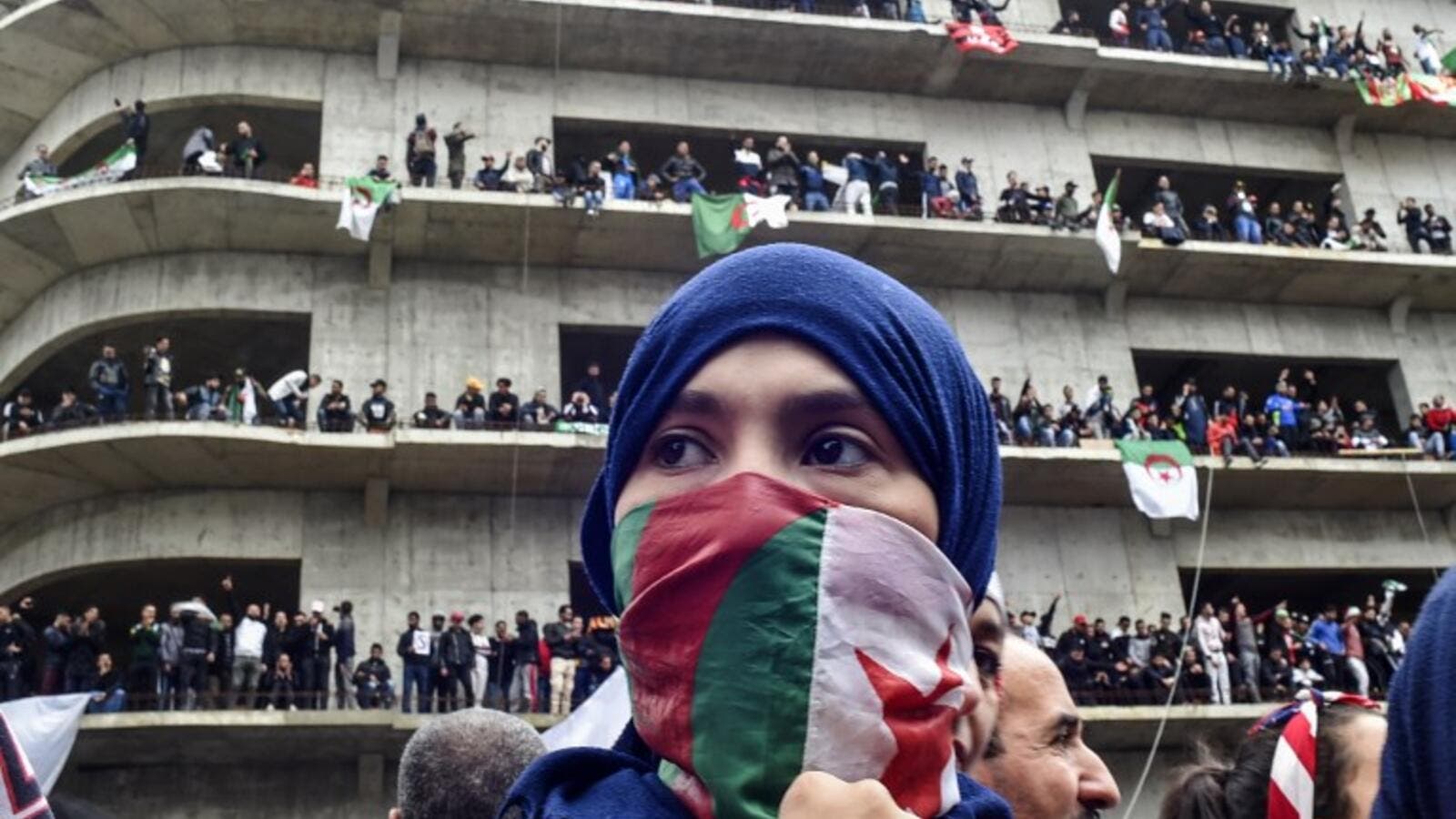 A woman covers her face with the national flag, as Algerian protesters demonstrate in the capital Algiers against ailing president's bid for a fifth term on March 8, 2019. RYAD KRAMDI / AFP

Hundreds of thousands of protesters flooded the streets of the Algerian capital in their third, and largest, Friday protest to try to break President Abdelaziz Bouteflika's hold on power.

Wrapped in Algerian flags, singing and tossing flowers, festive crowds overflowed into all the main boulevards and other streets in the city on the Mediterranean.

There was no official count of the crowd size, but a police chief estimated about 500,000 when asked.

Algerian businessman Rachid Nekkaz was arrested at a hospital in Geneva on Friday where President Bouteflika is reportedly being treated, Swiss police said.

Nekkaz, who had sought to run against Bouteflika in Algeria's upcoming elections, was arrested inside the University Hospitals of Geneva, police spokeswoman Joanna Matta said.

Tensions flared as the hours-long march began to disperse, with police firing tear gas at flanks of protesters trying to move toward the presidential palace, repeating a scenario from last Friday's protest. Small groups were seen pulling tiles from the roof of the antiquities museum to lob at police, drawing volleys of tear gas.

On Thursday, in a message released on the eve of the fresh protests, Bouteflika warned that trouble-makers may try to infiltrate the demonstrations leading to "chaos".

Calls have circulated widely on social media under the hashtag "#March 8 Movement" for massive but peaceful demonstrations in the capital and cities across the North African state.

More than a dozen political parties and unions have thrown their support behind widening street protests against Bouteflika and denounced the government's "stubborn" hold on power.

The Algerian leader has been in power since 1999 but has been all but absent from the public eye since a stroke in 2013. He has been hospitalised in Switzerland since last month for what the government describes as medical tests.

At a meeting that ended late Thursday, 15 opposition parties and four unions praised the protest movement and criticised the government for its "stubborn power" in insisting upon the elections in April.

Protesters are calling for a general strike if the government doesn't back down.

Bouteflika flagged the risk of a return to the "national tragedy" of Algeria's decade-long civil war in the 1990s and of the "crises and tragedies caused by terrorism" in neighbouring countries.

Algeria has largely avoided the conflicts unleashed by the Arab Spring uprisings that brought down rulers in neighbouring Tunisia and Libya.

But discontent, particularly among the country's youth, turned to anger after the veteran leader announced on February 10 that he would seek another bid for power.