Published September 28th, 2022 - 06:48 GMT
A man walks along a street of Havana, on September 27, 2022, following the passage of Hurricane Ian. Hurricane Ian made landfall in western Cuba early Tuesday, with the storm prompting mass evacuations and fears it will bring widespread destruction as it heads for the US state of Florida. (Photo by YAMIL LAGE / AFP)
Highlights
Millions without electricity as authorities work to restore service

Hurricane Ian has knocked out power to the entire island of Cuba ahead of landfall in the US state of Florida in the next 24 hours, authorities said Tuesday. 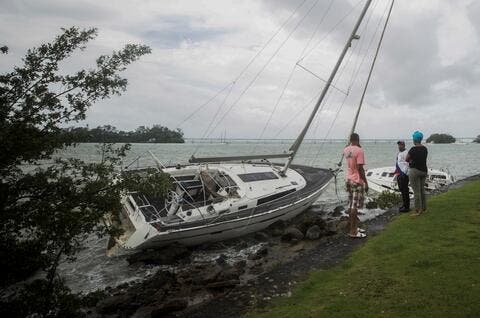 In a statement, Cuba’s state-run energy company Unión Eléctrica de Cuba said electricity was cut off to the entire island of roughly 11 million people and efforts are being made to gradually restore power services.

The Category 3 hurricane passed through western Cuba on Tuesday morning, wreaking havoc, and many people were evacuated.

This is amazing. Don Lemon tries to blame Hurricane Ian on climate change. NOAA's hurricane director shuts him down. pic.twitter.com/svTjHtE8hl

While no casualties have been reported so far, authorities are working to determine the damage caused by the hurricane.

Ian could strengthen to a Category 4 storm as it targets the US state of Florida, where it will approach the southwest coast on Wednesday and is expected to spread northward throughout the week.

At least 2.5 million Floridians are currently under some type of evacuation order as Ian rapidly intensified into a major hurricane on Tuesday.

#HurricaneIan was pictured from the space station on Sept. 26, 2022, as the storm was just south of Cuba gaining strength and heading toward Florida. pic.twitter.com/LBDLTP7J6N

Residents of the city of Tampa continued their preparations to survive the hurricane with minimum damage as they filled grocery stores to buy food items and water. Sandbags, generators, radios and chainsaws were among the most requested items.