Published May 9th, 2021 - 05:41 GMT
A family member offers prayers during cremation of his loved one who died due to the Covid-19 coronavirus at a cremation ground in Allahabad on May 8, 2021, as India recorded more than 4,000 coronavirus deaths in a day for the first time. Sanjay KANOJIA / AFP
Highlights
India reports over 4000 deaths of Covid-19 breaking new national record.

India set a new national record Saturday of more than 4,000 deaths from COVID-19 in the previous 24 hours, according to the health ministry. 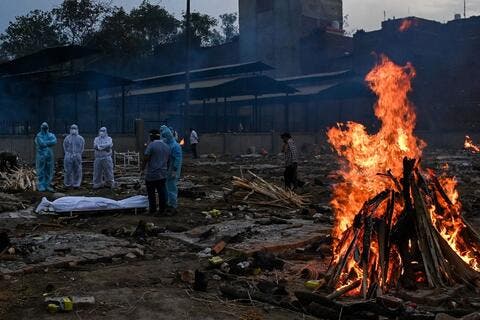 The Ministry of Health and Family Welfare reported 4,187 new COVID-19 deaths, bringing the country's total death toll to 238,270, according to the Johns Hopkins University global tracker.

India became the third country -- after the United States and Brazil -- to surpass 4,000 COVID-19 deaths in a single day, Anadolu Agency reported.

The newest figures come amid a surge of COVID-19 in India, slow vaccine rollout and a medical oxygen shortage at hospitals that has left some patients dying as they wait for assistance.

Meanwhile, India's neighbor, Pakistan has been fighting a third wave of COVID-19 infections, reporting more than 140,000 cases and 3,000 deaths in the last month, according to the BBC.

As the Muslim religious holiday Eid al-Fitr nears, the government of Pakistan has implemented a partial lockdown, closing all but essential shops, from Saturday though May 16.

The foreign ministry of China, a more wealthy country with more access to vaccines than India, announced Friday it would send medical supplies to Nepal amid a surge of the virus in the country, The Himalayan Times reported.

Another neighboring country, Sri Lanka, became the first country in South Asia on Saturday to approve Pfizer's COVID-19 vaccine for emergency use amid restricted supply of vaccines from India, the Hindustan Times reported.

New figures on Thursday showed that India confirmed national record new deaths, with 3,980 people lost in 24 hours. The number of cases recorded was also a record for the country, at 412,262. 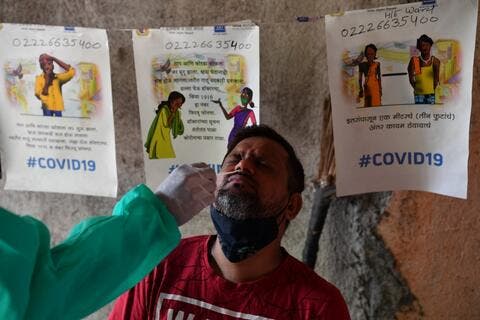