Iran Calls on Nations to Help in Rebuilding Afghanistan

Published March 31st, 2022 - 08:43 GMT
A child carrying balloons to sell reacts to the camera in Kabul on March 30, 2022. (Photo by Ahmad SAHEL ARMAN / AFP)
Highlights
Iran is now hosting about five million Afghans who are inflicting heavy costs on the Iranian economy.

Iran has called on Afghanistan’s neighboring and friendly countries to strengthen cooperation in the reconstruction of the conflict-ridden state and boost assistance to the oppressed nation without political and legal considerations. 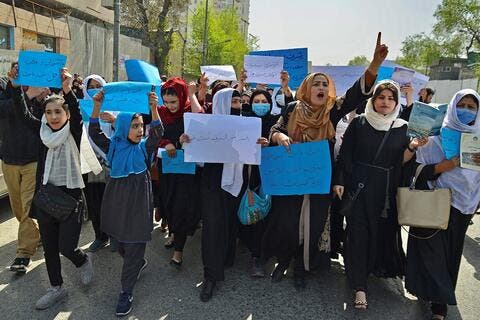 In a statement to the third meeting of foreign ministers of the countries neighboring Afghanistan in Tunxi, China, on Thursday, Iran’s Foreign Minister Hossein Amir-Abdollahian expressed hope for regional convergence to help the South Asian country overcome various challenges.

“We should all join hands to prevent Afghanistan from turning once again into a battleground for political and military conflicts. Without a doubt, the people of Afghanistan and neighboring countries will be the first victims of the destructive outcomes of such a situation,” he said.

“It is necessary that Afghanistan’s neighbors and friendly countries come up with relevant mechanisms to strengthen cooperation in the reconstruction and development of Afghanistan.”

Amir-Abdollahian also said stressed that the root cause of problems in Afghanistan is “the long-term occupation and misguided policies of the occupiers, mainly the United States.”

The occupation of Afghanistan “did not contribute to its development, but caused some sort of dependency which resulted in the collapse of Afghanistan’s political and economic structures when the occupiers withdrew and like always, left the oppressed people of Afghanistan as losers and victims,” he added.

The top Iranian diplomat further voiced concerns about the difficult humanitarian situation in Afghanistan, saying it is necessary for all countries, particularly the neighboring ones, to assist its people in any way without highlighting political and legal issues.

The Islamic Republic, he noted, has over the past several months distributed more than 30 consignments of humanitarian aid among the people of Afghanistan, exported basic commodities to the country and kept its transit routes open to Afghan containers.

He also said that the freezing of Afghanistan’s financial assets has further exacerbated the humanitarian situation there.

Additionally, Amir-Abdollahian raised alarm at the recruitments by terrorist and radical groups, such as Daesh in Afghanistan, underlining the need for collective measures by the countries of the region to combat terrorism.

“I propose that we create a specific security mechanism within the framework of the current structures or an independent entity to coordinate counter-terrorism policies by the Afghanistan’s neighbors so as to facilitate and manage the collective measures and exchange of information,” he added.

Pointing to the wave of refugees leaving Afghanistan, he said the Islamic Republic is now hosting about five million Afghans who are inflicting heavy costs on the Iranian economy.

“The Islamic Republic of Iran has been hosting Afghan sisters and brothers in the past four decades like a good neighbor and has spared no efforts in improving the conditions of Afghan people in Iran or Afghanistan; however, difficult conditions imposed on Iran’s economy as the result of oppressive sanctions have made it very hard and almost impossible to allocate new resources for refugees. Therefore, it is necessary that respective international organizations and countries interested in helping the people of Afghanistan pay extra attention to the special living conditions of Afghan refugees in Iran,” he asserted.

Also in his statement, Amir-Abdollahian described as “an unavoidable reality” the formation of an inclusive government with the participation of all Afghan tribal groups, urging the ruling establishment to take more practical measures in this respect.

No School For You! Afghani Girls Told at The Gate

“To achieve a safe, secure and stable Afghanistan, the world community particularly us as Afghanistan’s neighbors must enhance cooperation and expand assistance to the people of Afghanistan and make efforts to strengthen political dialogue in Afghan society so that the ruling establishment and various social and political groups reach a better understanding and proximity and facilitate more interaction,” he said.

“A united message and robust action by Afghanistan’s neighbors could help Afghanistan exit the status quo and play an important and constructive role in drawing a regional security system.”