Published November 19th, 2021 - 05:49 GMT
Iraqis covers her face as she arrives at the airport in Baghdad after being flown home from the Belarusian capital Minsk, on November 18, 2021. (AFP/File)
Highlights
Planes carrying Iraqi citizens land at Erbil and Baghdad international airports

Hundreds of Iraqis who were stranded at the Belarus-Poland border while seeking to enter the European Union voluntarily returned home Thursday. 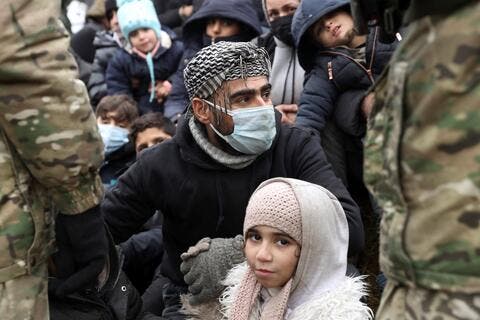 A plane carrying some of them landed at Erbil International Airport.

In a statement earlier, the Iraqi Kurdish Regional Government (KRG) said a plane that would take off from Belarus with Iraqi migrants would arrive in Erbil this evening.

More than 400 Iraqis sought to fly home from Belarus on Thursday, abandoning their hopes of reaching the European Union https://t.co/smi4fuPmCk

Around 20,000 people trying to enter Europe via Belarus were stranded for more than a month, and more than 460 people had registered to return and the plane would carry 430 people from Iraq and the KRG, it added.

Meanwhile, another 432 Iraqi citizens were brought to Baghdad from Belarus by Iraqi Airways as a part of a repatriation operation organized by the Iraqi Foreign Ministry.

“We got a visa to Belarus and went to travel. Later, when we heard that there was migration to Europe and we thought that we would have a better future, we went to the border. However, our dreams were shattered and we returned to Iraq," Abdullah Ahmed told Anadolu Agency at Baghdad International Airport.

Another Iraqi, Ersat Suphi, said: "I went to Belarus 12 days ago. We thought that we would start a new life by going to Poland and then to Germany from there. We suffered hunger and misery at the border."

They were placed in forest areas far from Lithuania and Poland, Suphi said, adding "Belarusian soldiers took our mobile phones, food and beverages and money from us. We were able to take them back by force."

Iraqi Foreign Ministry spokesman Ahmed Al-Sahhaf said Monday that 571 Iraqi citizens had been detected in eight camps on the border between Belarus and Poland.

It is reported that some of migrants from the camp near the Belarus-Poland border are going to the airport and then - "to Kurdistan" (Iraq, most likely). It is known that more than 430 Iraqis are planning to leave for Iraq on the nearest flights. pic.twitter.com/NYAevGieXJ

Since August, the EU countries bordering Belarus -- Lithuania, Latvia and Poland -- have reported a dramatically growing number of irregular crossings.

Over 8,000 people have tried to enter the bloc via the Belarus-EU border so far this year, up sharply from just 150 last year. 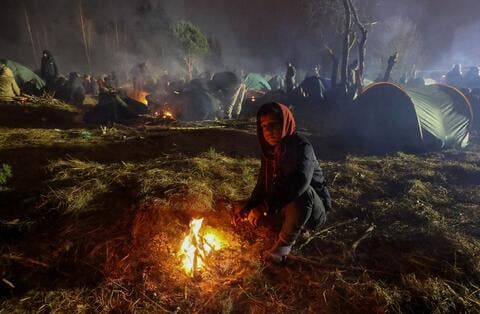 According to the EU, Belarus reaches out to potential travelers through seemingly official channels, including diplomatic missions and travel agencies, and invites them to Belarus by offering them visas. They are then allegedly guided to the EU border.

Over the last week, at least 2,000 people, including women and children, have been stuck in the Belarusian-Polish border area in dire conditions.