Israel is Accused of Dragging The Region Into a Religious War

Published July 19th, 2021 - 09:22 GMT
A Palestinian woman approaches a closure manned by Israeli security forces as ultra-Orthodox Jewish youths pray outside the al-Aqsa mosque compound in Jerusalem, during the annual Tisha B'Av (Ninth of Av) fasting and memorial day, commemorating the destruction of ancient Jewish temples some 2000 years ago, on July 18, 2021. AHMAD GHARABLI / AFP
Highlights
Israel is undermining regional security, and will push the region into religious war

Palestinian President's spokesman, Nabil Abu Rudeineh, attacked Israel saying it is undermining the security and stability of the area, and further warned it might drag the region into a religious war that will burn the entire region. 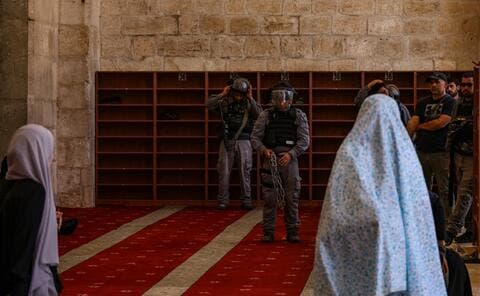 Rudeineh's comments on Sunday came hours after Israeli forces and extremist settlers stormed the courtyards of the al-Aqsa Mosque compound in occupied East Jerusalem al-Quds, as the regime’s police attacked Muslim worshippers there and detained many of them.

Why is Israel attacking Al Aqsa on Eid Al Adha (the holiest day for Muslims)? Why attack people who are literally kneeling down in prayer?

Answer: To continue dehumanizing Palestinians even in prayer. It's not enough to bomb them while they sleep or demolish their homes. https://t.co/dzp8wMJBX8

“By continuing its policy of incursions into religious places, as is happening today in the al-Aqsa Mosque, Israel is defying the Palestinian people and disregarding international positions, especially the American position which demanded [Israel] to adhere to the status quo in Jerusalem [al-Quds],” Rudeineh said, Palestine's official Wafa news agency reported.

Elsewhere in his remarks, Rudeineh added that attacks in al-Aqsa came in the context of the ongoing suspicious attack on the Palestinian national project.

“But the national project will not be defeated, and Jerusalem, the independent national decision and the steadfastness of the Palestinian people will preserve the [Palestinian] identity and protect the holy sites,” he noted.

Citing witnesses, Wafa reported that dozens of Israeli police officers began raiding the holy site through the Chain and Moroccan gates before they started beating and assaulting the Muslim worshipers, who were attending prayers at the holy site.

The Israeli police also fired stun grenades and tear gas canisters at the Muslim worshipers and forced many of them out of the holy site.

The report said the Israeli police conducted the brutal raid in an attempt to make way for the entry of hundreds of Israeli settlers there.

Witnesses further said that the Israeli police locked down the southern main building inside the holy site, and hundreds of Muslim worshipers were left inside and were unable to leave. Later, groups of Israeli settlers stormed the courtyards after they were almost forcibly emptied of all Muslim worshippers.

According to the report, the Israeli extremist groups kept calling on hordes of fanatic settlers to force their way into the al-Aqsa complex in large numbers on Sunday, on the occasion of the anniversary of what Israel calls “the destruction of the temple.”

The al-Aqsa Mosque compound sits just above the Western Wall plaza and houses both the Dome of the Rock and the al-Aqsa mosque.

The Jewish visitation of al-Aqsa is permitted but according to an agreement signed between Israel and the Jordanian government after Israel’s occupation of East Jerusalem al-Quds in 1967, non-Muslim worship at the compound is prohibited.

Tel Aviv, however, often allows hardline Israeli legislators and extremist settlers to storm the holy site and carry out religious rituals in defiance of the accord, a provocative move that infuriates Palestinians.

In another reaction to Sunday events at al-Aqsa mosque, the Palestinian prime minister condemned settlers’ incursions into the holy site, saying that such storming of al-Aqsa mosque is aimed at creating divisions.

Mohammed Shtayyeh called on the international community to urgently intervene to stop these violations, because they provoking Muslims feelings and as such pose a direct threat to security, peace, and stability in the entire region.

The Palestinian premier added that such incursions contravene the established protocols in force at the mosque since the occupation of the Palestinian territories by Israel in 1967.

Shtayyeh warned of the dangerous repercussions of the recurrence of such incursions at a time when Israel continues its policy of persecution, racism, and ethnic cleansing against the original inhabitants of the occupied city with the goal of replacing them with settlers.

Also on Sunday, the Palestinian foreign ministers, for its part, called on the international community to take a firm position against the ongoing Israeli aggression on al-Aqsa, Wafa reported.

It further held the Tel Aviv regime fully responsible for its ongoing attack on all neighborhoods of the occupied East Jerusalem al-Quds, and in particular the al-Aqsa Mosque, saying that the aggression would have dire consequences for the overall political situation.

The ministry also stressed that the Tel Aviv regime’s attempts to change the historical and legal status quo in al-Aqsa Mosque would not pass, thanks to the steadfastness of the Palestinian inhabitants of Jerusalem al-Quds who have been keen on defending their holy city on behalf of the Arab and Muslim nations.

In another development on Sunday, the Organization of Islamic Cooperation (OIC) condemned the storming of al-Aqsa mosque by extremist Zionist settlers under the protection of Israeli police and the subsequent attack on Palestinian worshipers.

Concerned over ongoing tensions around the Haram Al-Sharif/Temple Mount. Acts of incitement have to be avoided and the status quo respected. Israeli authorities, religious, and community leaders from all sides should act urgently to calm down this explosive situation.

The OIC stressed in its statement that repeated attacks on the sanctity of the holy sites come as part of Israel’s plan to change the historical and legal status quo in Jerusalem al-Quds, which constitutes a violation of international law, the Geneva Conventions and relevant United Nations resolutions.

OIC also held Israel fully responsible for the consequences of the continuation of such systematic attacks, calling on the international community, especially the UN Security Council, to fulfill its responsibilities to put an end to these violations.

The European Union (EU), for its part, expressed concern over the ongoing tensions around the al-Aqsa Mosque (the Haram Al-Sharif), fuelled on Sunday morning by the mass Israeli incursion into the holy site.

"Concerned over ongoing tensions around the Haram Al-Sharif. Acts of incitement have to be avoided and the status quo respected,” said the EU mission to Palestine in a tweet. 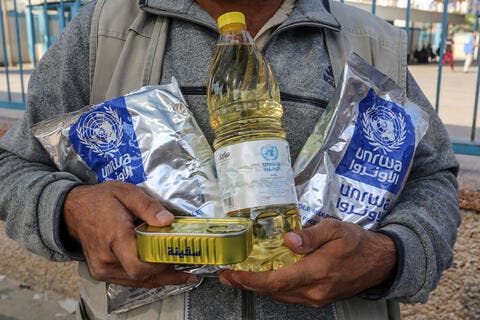 The US Allocates $135.8 Million For Palestinian Refugees

“Israeli authorities, religious, and community leaders from all sides should act urgently to calm down this explosive situation,” the mission added.

What Are Kerem Bürsin and Hande Erçel's Plans on Eid Al-Adha? (Picture)

5 Habits Billionaires Have In Common