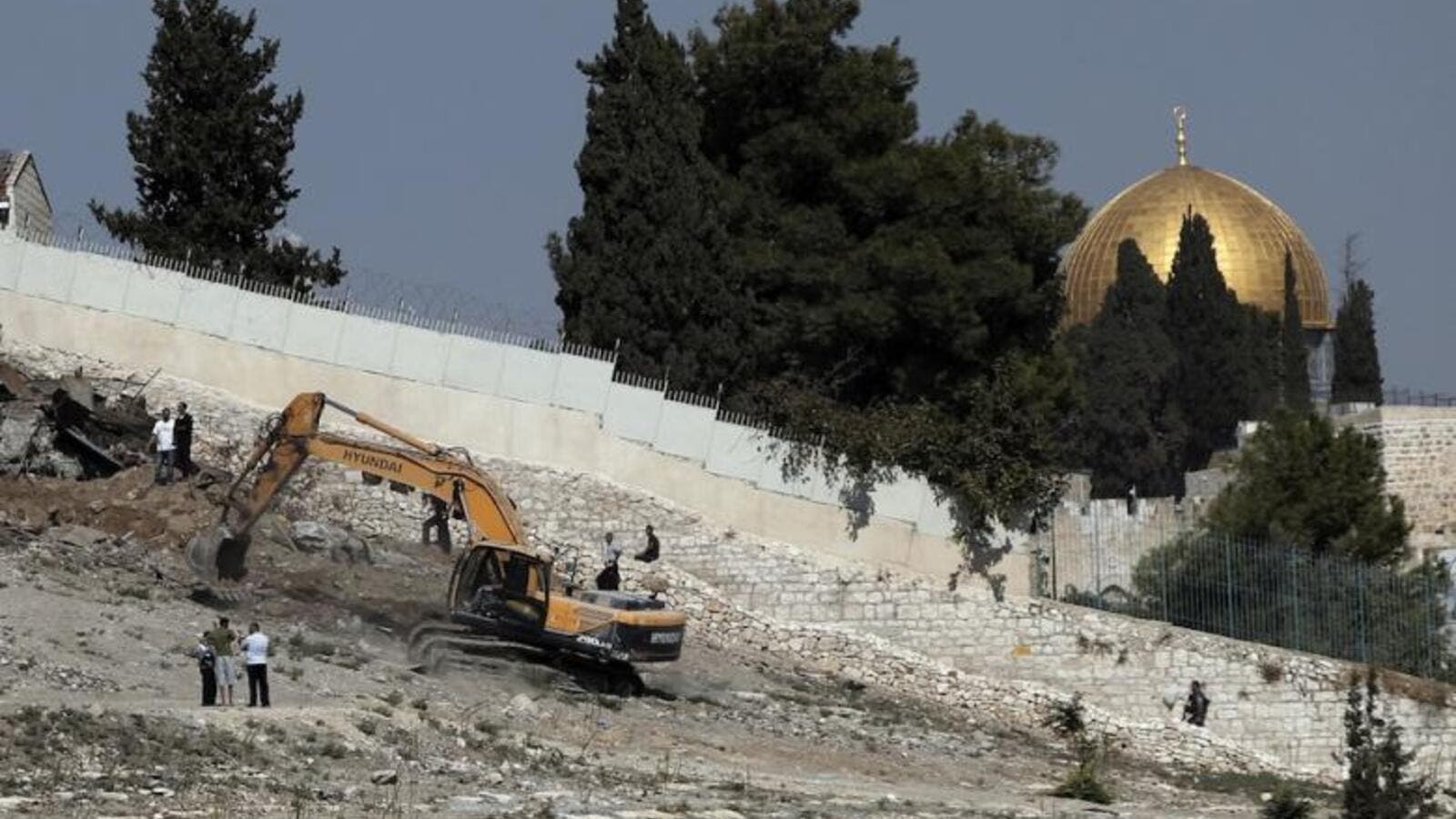 The demolition of Palestinian sheds in the annexed East Jerusalem neighborhood of Silwan. (AFP/File)

Hours after Israel’s Jerusalem municipality cancelled plans to vote on approving construction of hundreds of new Israeli settlement units in occupied East Jerusalem, Jerusalem's city planning commission instead approved a plan to build a three-story building for Jewish settlers in the heart of the Palestinian neighborhood of Silwan, Israeli media reported.

Reuters news agency reported earlier Wednesday that the municipality cancelled a vote to approve settler units to avoid further strain on diplomatic relations with the US, as US Secretary of State John Kerry was set to give a speech addressing his vision for the Israeli-Palestinian conflict and a new United Nations Security Council resolution that reaffirmed that Israeli settlements in the occupied Palestinian territory are illegal under international law.
In the days following its passage, reports emerged that Israel’s Local Planning and Building Committee in Jerusalem municipality was expected to approve thousands of housing units in occupied East Jerusalem for illegal settlements. However, newer reports said the coming plans would have been just for the approval of 492 building permits in Ramot and Ramat Shlomo.
Members of the Jerusalem committee told Reuters Wednesday that the cancellation of the vote came at Israeli Prime Minister Benjamin Netanyahu's request out of fear the approval of the new settlements would have given Kerry "ammunition before the speech.”
However, just ahead of Kerry's speech, a vote on the Silwan project took place, according to Israeli daily Haaretz,. The report also said that the Jerusalem municipality denied Netanyahu had called for the earlier vote on the unites in ramot and Ramat Shlomo to be put off.
The Silwan settlement project was introduced by the Israeli pro-settlement nonprofit organization Ateret Cohanim, and its approval was been postponed many times in the past due to political pressure, according to Haaretz.
The plan will permit Ateret Cohanim to construct a new building located near the site of controversial Beit Yonathan, which was sold to Ateret Cohanim by the custodian of absentee properties, without a tender.
Ateret Cohanim focuses on “Judaizing” East Jerusalem through a Jewish reclamation project working to expand illegal settlements and facilitate Jewish takeover of Palestinian properties across the Green Line into Palestinian territory.
Israeli settlement construction plans were just one aspect of the UNSC resolution’s fallout, with the Netanyahu government also calling for an end to all non-security related coordination with the Palestinian Authority, and drastically limiting diplomatic ties with UNSC members states.
Meanwhile, Israeli Education Minister Naftali Bennett again called for the total annexation of the illegal Israeli settlement of Maale Adumim as well as the entirety of Area C in the West Bank -- the more than 60 percent of the territory currently under full Israeli military and civil control.
Human rights groups and international leaders have strongly condemned Israel’s settlement construction in the occupied West Bank, claiming it is a strategic maneuver to prevent the establishment of a contiguous, independent Palestinian state by changing the facts on the ground, while members of Israel's parliament have repeatedly come forward announcing their support for annexing Area C.
A recent report by human rights group B'Tselem argued that under the guise of a "temporary military occupation," Israel has been "using the land as its own: robbing land, exploiting the area’s natural resources for its own benefit and establishing permanent settlements," estimating that Israel had dispossessed Palestinians from some 200,000 hectares (494,211 acres) of lands in the occupied Palestinian territory over the years.
B’Tselem highlighted the “key role” of Israeli settlers in further isolating Palestinians from their lands, either through the establishment of outposts officially unrecognized by the Israeli government, or through the regular use of violence or threats of violence against Palestinians.
The movement of Israeli settlers taking over Palestinian land, and further displacing the local Palestinian population has been a "stable" Israeli policy since the takeover of the West Bank and Jerusalem in 1967, B'Tselem reported, underscoring that all "Israeli legislative, legal, planning, funding, and defense bodies" have played an active role in the dispossession of Palestinians from their lands.