Published March 29th, 2022 - 08:36 GMT
Palestinians inspect a burnt car in front of their home in the village of Jalud, south of Nablus in the occupied West Bank, on March 28, 2022, following a reported attack at night by Israeli settlers from the outpost of Achya. (Photo by JAAFAR ASHTIYEH / AFP)
Highlights
Ghassan Daghlas, an official who monitors Israeli violations in the area, said settlers from the nearby settlement outpost of Adei Ad were behind the latest attack.

In a new act of provocation, extremist Israeli settlers have set fire to at least four Palestinian-owned vehicles and caused damage to several others in two separate attacks in the occupied West Bank. 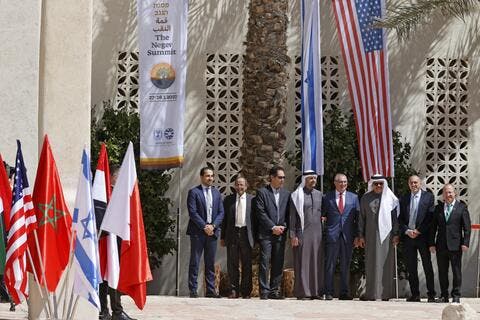 Arab Envoys Meet in The Israeli Desert But Where Are The Palestinians?

The Palestinian Information Center, citing witnesses on Monday, reported that the settlers sneaked into the northern West Bank village of Jalud, south of Nablus, and threw sharp objects at parked cars and set at least four of them ablaze

Ghassan Daghlas, an official who monitors Israeli violations in the area, said settlers from the nearby settlement outpost of Adei Ad were behind the latest attack.

This came hours after a group of settlers escorted by Israeli soldiers closed a checkpoint near Shufa village in the southeast of Tulkarem and barred Palestinian vehicles from traveling through the area.

Separately, Israeli settlers on Monday forced their way into Turmus Aya town, north of the West Bank city of Ramallah, where they threw stones and vandalized Palestinian vehicles, the Palestinian media said.

They also punctured the tires of several vehicles and sprayed anti-Palestinian and anti-Arab graffiti on the external walls of nearby houses.

The acts of violence and vandalism, known as price tag attacks, which are committed by Israeli settlers against Palestinians and their property, have risen in recent years.

Various attacks on Palestinian property, including arson and graffiti, have become a daily occurrence throughout the occupied territories, particularly in the West Bank.

However, Israeli authorities rarely prosecute the Israeli settler assaults on Palestinians and their property and the vast majority of the files are closed due to deliberate police failure to investigate properly.

The United Nations last year warned of a surge in Israeli settler violence against Palestinians, mostly in the areas of al-Khalil, al-Quds, Nablus and Ramallah.

The Palestinian foreign ministry has time and again condemned in the strongest terms Israeli settler price tag attacks on places of worship and worshipers and other sites. It has called on the international community and relevant international bodies to stand against such grave violations of international law, human rights principles and civil liberties – the foremost of which is the freedom of worship.

Meanwhile, the European Union has called for the protection of Palestinians and prevention of “violence” following the recent string of settler attacks against Palestinians and their property.

“Palestinians should be protected in accordance with Israel’s obligations under international law. Imperative now to prevent further violence ahead of Ramadan, Pesach and Easter coinciding in April,” it added.

The EU delegation made its remarks in the wake of settler attacks, including the vandalism of Palestinian vehicles in the Ramallah-district town of Turmus Aya town and torching others in the Nablus-district village of Jalud.

More than 600,000 Israelis live in over 230 settlements built since the 1967 Israeli occupation of the West Bank and East al-Quds.

The UN Security Council has condemned Israel’s settlement activities in the occupied territories in several resolutions.

Palestinians want the West Bank as part of a future independent Palestinian state with East al-Quds as its capital.