Published September 17th, 2021 - 04:22 GMT
A woman holds a sign showing a photo of a man reacting at the scene of the 2020 Beirut port blast on ther day, as protesters and family members of the 2020 Beirut port blast gather for a demonstration near the UNESCO palace in the Lebanese capital on August 12, 2021, ahead of a parliamentary meeting on the blast investigation. (Photo by ANWAR AMRO / AFP)
Highlights
Judge Tarek Bitar issued an arrest warrant for the former public works and transportation minister Youssef Fenianos, after Fenianos failed to appear for questioning

The judge leading the investigation into the August 2020 Beirut blast have released an arrest warrant on Thursday for the ex-public works and transportation minister Youssef Fenianos, after Fenianos failed to appear for questioning. 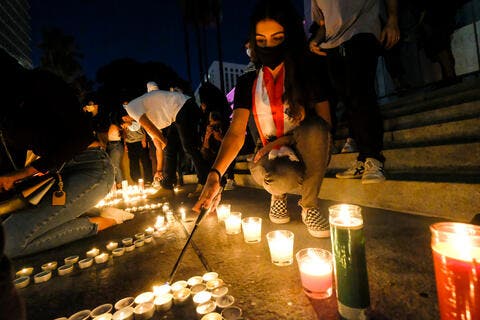 Judge Tarek Bitar has also subpoenaed former Prime Minister Hassan Diab, who was the premier at the time of the port blast, and has demanded that parliament lift the immunity of three MPs — Nohad Machnouk, Ghazi Zeaiter and Ali Hassan Khalil — in addition to a number of security officials he is keen to question.

Diab stepped down as caretaker prime minister and left the country when Prime Minister Najib Mikati took office earlier this month. Social media was abuzz with the news of Diab’s departure, with many speculating that he would not return for his scheduled questioning on September 20. Diab reportedly travelled to the US to visit his children, whom he had not seen for two years, before receiving Bitar’s subpoena, which was issued on August 26.

A judicial source said that the discriminatory Attorney General, Judge Ghassan al-Khoury — the judicial public prosecutor in the investigation, referred the subpoena against Diab to the General Directorate of the Internal Security Forces for implementation.

Bitar issued another subpoena against Diab on Sept. 14, this time including the address of his residence in Beirut. If Diab fails to return before Monday morning, then the judge would have the right to issue a warrant for his arrest.

Bitar is facing pressure from all sides of the political spectrum. Hezbollah Secretary-General Hassan Nasrallah accused the judge of “playing a political game.” Bitar’s predecessor in the case, Judge Fadi Sawan, was relieved of his duties as a result of political pressure when two of the former ministers he had charged with negligence for the disaster had their request for his removal from his post granted by a court.

Many see the subpoena against Diab as a measure of how seriously the new government is taking the investigation. If Diab is allowed to continue to evade questioning from Bitar, and if the newly formed government’s parliament refuses to lift ex-ministers’ immunity, then there seems little hope of justice for the victims of the blast and their families.

Those families took to the streets again on Thursday to apply more pressure on the political establishment to stop what they perceive as its interference in the judiciary’s investigation. They blocked the road in front of the Palace of Justice in Beirut and stressed the need to hold the perpetrators accountable.

Mothers of some of the victims carried their children’s pictures and banners that referenced Mikati’s emotional speech when he discussed how people were suffering in Lebanon’s ongoing economic crisis. “If your eyes watered when you thought about the mothers who were suffering, then stand with us, the mothers of the victims. Help Judge Bitar bring us justice,” the banners read.

Others held banners with blunter statements, including: “We want our rights and we will not let our children’s blood go to waste.”

William Noun, whose brother Joe was one of the 215 people killed by the explosion, which left thousands injured and several residential neighborhoods completely destroyed, told Arab News: “Diab left the country because he is running away from justice. He knows which party blew up the ammonium nitrate. The same party that prevented him from going to the port (when he got word of the ammonium nitrate stored there) before the explosion facilitated his departure.”

The families of the victims said in a joint statement: “The Public Prosecution, which is supposed to be on our side, is taking suspicious actions; it released suspects without having the powers to do so and began leaking information about the investigation.

“Stop confronting us with politics. We do not understand your policies. What we do understand is that you killed us. The Beirut Port blast was on purpose. Someone is responsible and they should be held accountable,” the statement continued. 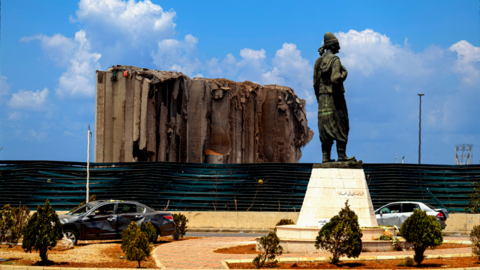 Local media was so preoccupied with the arrest warrant for Fenianos, that news of Syrian vehicles loaded with Iranian diesel entering Lebanese territory went almost unnoticed.

The convoy — estimated to consist of around 80 tankers — entered through illegal Hezbollah crossings on the outskirts of Hermel. Hezbollah followers reportedly gathered on the road to Baalbek to greet it, and the cargo was emptied into tanks belonging to Al-Amana Fuel Co., which is currently subject to US sanctions.