Published July 5th, 2022 - 08:00 GMT
First responders take away victims from the scene of a mass shooting at a Fourth of July parade on July 4, 2022 in Highland Park, Illinois. At least six people were killed and 19 injured, according to published reports. Jim Vondruska/Getty Images/AFP
Highlights
Nicolas Toledo was among the six people shot dead during July 4 parade

A 78-year-old victim of the Chicago July 4 massacre was shot in the head as he sat in his wheelchair, sending blood splattering onto his horrified family. 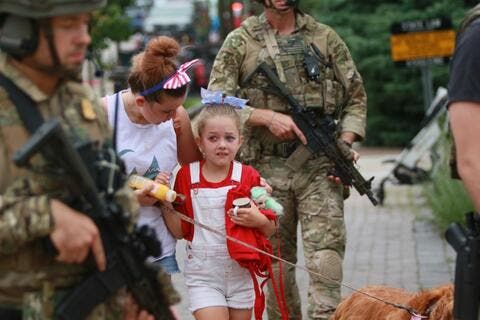 Nicolas Toledo, 76, had not wanted to attend the parade in Highland Park, Illinois, his granddaughter also told the New York Times hours after the shooting that killed Toledo and five others.

But because of his disabilities that restricted him to a wheelchair, and his family's insistence of going, he obliged.

My heart breaks for the people of Highland Park, Illinois, who wanted nothing more than to celebrate their country this morning – but instead had their lives change forever. To the injured, and to the loved ones of the victims: Canadians are keeping you in our thoughts.

'We were all in shock,' his granddaughter Xochil Toledo said. 'We thought it was part of the parade. Then we realized our grandfather was hit. We saw blood and everything splattered onto us.'

Family members say Toledo was shot three times. Two other people in the family were also shot, she said, but their injuries were non life-threatening.

Toledo, a Mexican national who held duel citizenships in Mexico and the United States, had moved back to Highland Park a few months ago at the urging of his family members.

'We brought him over here so he could have a better life,' Xochil said. 'His sons wanted to take care of him and be more in his life, and then this tragedy happened.'

The shooting began less than 15 minutes after the parade started. Five adults were killed at the parade and a sixth victim died at the hospital.

Dramatic photographs from the scene show the suspected mass-murderer - who posted creepy clips about shooting massacres online - being pinned to the ground face-down by police.

Cops say Crimo opened fire from a rooftop, into a crowd who at first confused the sound of gunshots with Independence Day fireworks.

A total of 26 victims aged between eight and 85 were injured, with six still receiving hospital treatment. The area has a large Jewish community, although police have yet to share a possible motive for Monday's slaughter.

The gunman's attack began less than 15 minutes after the start of the parade. Witnesses have now told how they saw children being picked off in the crowd.

'We all threw ourselves to the ground,' Toledo's daughter, Josefina Toledo, told The Daily Beast. 'My dad, since it's difficult for him to walk … he was sitting on his walker and he was hit in his back and in his head.'

She said the parade was a family tradition and the whole family attended. But the celebration ended when shots rang out. The boyfriend of one of her nieces was also shot and is in stable condition.

Little is known about the other victims at this time, but the Lake County coroner has confirmed the five people pronounced dead at the scene were adults.

The age of the sixth victim, who died at an area hospital, remains unknown.

'There was one that was transported to a local hospital that also died at the hospital. I don't have any additional information on that victim,' Lake County coroner Jennifer Banek told CNN.

The shooter is said to have opened fire from the rooftop of a local business. Police believe he used a ladder in an alley to climb to the roof.

'It looks like access to the roof via a ladder in an alley was unsecured,' Sgt. Chris Covelli, of the Lake County Major Crime Take Force, revealed. The ladder was attached to the building.

Meanwhile, witnesses described seeing children being shot at the parade.

'All of a sudden everyone behind us started running. I looked back, probably 20 feet away from me, I saw a girl shot and killed. I saw her die. I've never seen anything like this,' a woman, who gave her name only as Zoe, told CNN.

All of the confirmed deaths so far are those of adults.

Many bystanders described multiple rounds being fired in quick succession, alleging they first confused the sound of gunshots with Independence Day fireworks.

'Everyone thought it was fireworks,' Zoe explained. 'My dad thought it was part of the show, and I'm like, 'Dad, no... something is wrong.' And I grabbed him. And I looked back at him, and then it was just a sea of panic, and people just falling and falling.'

Jeff Leon, who also attended the parade said it 'sounded like a string of firecrackers going off inside of a big metal trash bin.'

He claims he heard maybe 20 or 30 pops before he saw people call to the ground and officers starting to move in.

'I saw multiple lifeless bodies, people in a pool of blood,' added one father, who survived with his kids. He said he tossed his son in a dumpster.

Highland Park, a suburban city with a population of 30,000, is renowned for being one of Chicago's most affluent suburbs.

NBA legend Michael Jordan owns a mansion in the area, and it's also where the enormous mansion featured in 'Home Alone' is situated.

The city's residents are largely families and there is a significant Jewish population in the area, but there is no suggestion the attack was anti-Semitic.

Among those who were participating in the parade was a Hasidic Jewish band. One jarring video showed them slowly making their way down the parade route on a float while those ahead of them - suddenly aware of the danger - ran in the opposite direction.

Nineteen-year-old real estate student Rainan Eli saw the shooting unfold from the window of his apartment on Central Avenue and Second Street.

'I was just sitting studying for some class I'm taking and watching the parade. I saw lots of people running and, at first, everybody assumed it was fireworks being the Fourth,' he told DailyMail.com.

Eli pulled out his cell phone and recorded heart-wrenching video of people running and seeking shelter as shots being fired could be heard in the background.

He said two other residents of his apartment building came downstairs with him and gave the 15 to 20 people in the vestibule drinks.

Debbie Glickman, a Highland Park resident, said she was on a parade float with co-workers and the group was prepared to turn onto the main route when she saw people running away from the area.

'We can't believe this happened in our little town.'

Matt Phillip, 36, director of tasting room operating at Lynfred Winery, told DailyMail.com: 'We were open early for the parade and upon hearing what sounded like fireworks, we noticed that people started running down the street.'

'We opened our doors so they could either seek shelter within our facility or exit through our back-alley door.'

Unlike Chicago, which has one of the worst gun violence records in the country, violent crime in Highland Park is almost unheard of.

The town's mayor, Nancy Rotering, spoke briefly at a press conference along with law enforcement on Monday to share her condolences with the families of those killed.

'I have been in contact with Mayor Rotering and have offered our support, and the Chicago Police Department is providing assistance.

'We grieve with the families of the deceased and injured as well as the entire Highland Park community.

'Law enforcement is working hard to bring the shooter into custody. If anyone has information, we encourage them to call 911 and report what you know.'

President Biden - who has been calling for gun reform since the Uvalde school shooting on May 24 that claimed 19 lives - issued a statement on Monday afternoon.

He said he had given his support to the governor of Illinois and the Highland Park mayor, and he celebrated his recent passing of a gun control bill.

'I recently signed the first major bipartisan gun reform legislation in almost thirty years into law, which includes actions that will save lives,' Biden said. 'But there is so much more work to do, and I'm not going to give up fighting the epidemic of gun violence.'

Governor JB Pritzker also addressed the violence, saying: 'There are no words for the kind of monster who lies in wait and fires into a crowd of families with children celebrating a holiday with their community.

'There are no words for the kind of evil that robs our neighbors of their hopes, their dreams, their futures.

'There are no words I can offer to lift the pain of those they live behind. I will stand firm with Illinoisans and Americans: we must - and we will - end  this plague of gun violence.'