Published July 5th, 2022 - 05:27 GMT
Law enforcement escorts a family away from the scene of a shooting at a Fourth of July parade on July 4, 2022 in Highland Park, Illinois. Police have detained Robert “Bobby” E. Crimo III, 22, in connection with the shooting in which six people were killed and 19 injured, according to published reports. Mark Borenstein/Getty Images/AFP
Highlights
July 4th parade shooting kill 6 people.

Police arrested a suspect late Monday in a mass shooting that left six people dead at a Fourth of July Independence Day parade in the US state of Illinois. 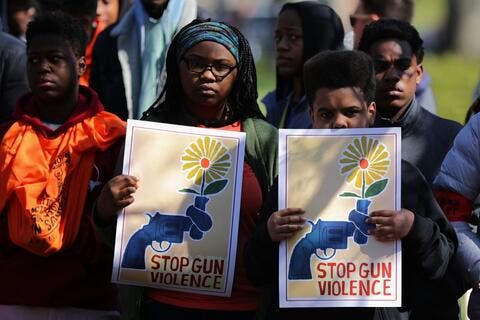 One Killed in Mass Shooting at Juneteenth Celebration in Washington

The shooting, which took place earlier in the day in the wealthy Chicago suburb of Highland Park, also left at least 24 others wounded.

A friend took his kids to July 4th Parade in Highland Park today. His son has special needs.
When shots rang out, they ran for their lives, the dad pushing his grown son's wheelchair--which at one point tumbled over.
On America's day, what has become a sickeningly American story.

Jogmen said when a police officer tried to “initiate a traffic stop,” Crimo attempted to flee, which was followed by a brief pursuit.

"Ultimately they were able to get the subject stopped in Lake Forest. The subject was taken into custody without incident," he told a news conference.

According to The New York Times, the ages of the wounded in the shooting ranged between 8 and 85 years old.

The gunman fired a high-powered rifle from a roof during the parade and the firearm has been recovered from the scene, police said in an earlier press conference.

Illinois Governor J.B. Pritzker thanked law enforcement agencies for their efforts in the arrest of the suspected gunman.

"This murderer will be brought to justice," he said at a press conference.

Noting that he had a phone call with President Joe Biden, Pritzker said: "This madness has to stop.”