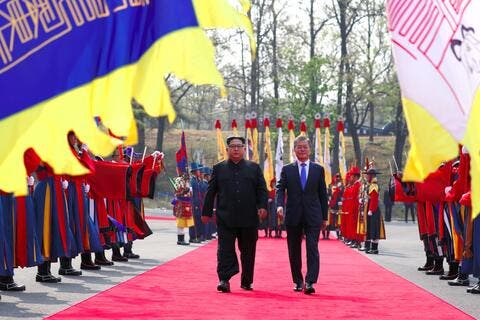 The dictator, 37, said during a speech on Sunday that his party was determined to achieve the economic goals set out during the party's congress in January, according to the Korean Central News Agency.

Earlier this year, Kim acknowledged that his previous economic plans were not succeeding and issued new development plans for the next five years.

In his latest speech, he is understood to have confirmed the determination of the party to carry out the five-year plan to boost 'the national economy' and solve 'the people's food, clothing and housing problems'.

His comments come as analysts have predicted that the North Korean leader is facing perhaps the toughest moment of his near decade in power.

The impoverished, nuclear-armed country, has been hit by severe flooding in recent years which has left families without homes and is currently tackling a food crisis as the nation struggles to feed itself amid the Covid-19 pandemic.

Mr Kim was said to have analysed the 'unprecedented difficulties' facing the country in his speech and called for for the party's single-minded unity in developing the state economy in the face of the 'grim situation'.

He failed to win vital sanctions relief in summits with then-President Donald Trump in 2018 and 2019, while the Covid pandemic then forced North Korea to close its borders.

This unleashed further economic shock after decades of mismanagement and US sanctions over Kim's nuclear weapons programme.

The World Health Organisation said last week some Covid medical supplies had arrived at a North Korean port, an indication the North was easing one of the world's strictest pandemic border closures to receive outside help.

Last month, the dictator ordered his officials to tackle the effects of the 'abnormal climate' during a Politburo meeting where he said the 'danger' of global warming has become higher in recent years, according to the Korean Central News Agency.

During the meeting, Kim said the 'disastrous weather' is becoming more pronounced worldwide. 'Our country is also lying vulnerable to its danger,' Kim said.

He called for senior province, city and county officials to focus largely on improving land management to help the country become more resistance to the changing climate.

He ordered the officials to adopt an 'ambitious plan' that calls for river improvement, reforestation for erosion control, dyke maintenance and tide embankment projects.  Kim also called for a sustainable flood management infrastructure.

The downpour in South Hamgyong Province washed away hundreds of hectares of farmlands and destroyed many bridges. Footage showed houses submerged up to their red-brick roofs, a severed bridge over muddy water and a swollen river.

Summer rains in North Korea often cause serious damage to its agricultural and other sectors due to poor drainage, deforestation and dilapidated infrastructure in the impoverished country.

Kim has acknowledged a 'tense' food situation that could worsen if all of the crops fail, exacerbating economic problems amid strict self-imposed border and movement restrictions that have slowed trade to a trickle.

North Korea is a mountainous nation, meaning suitable land for farming is in short supply and many of its farmers lack access to tools such as tractors, combine harvesters and threshers.

As a result, it is thought that North Korea relies on foreign imports and aid to feed around a third of its population.

Even with those imports, a 2017 UN report concluded that two fifths of the population are undernourished - meaning they don't have access to the number of calories needed per day to maintain a healthy weight.

A third of North Korea children are also thought to be stunted, meaning they did not get enough calories during the early years of their life.

In April this year, Kim warned that North Korea is facing a famine comparable with one in the 1990s during which millions of people are thought to have died.

He said his country is in its 'worst ever' situation due to natural disasters last summer that devastated farmland, the Covid pandemic which has halted trade, and US-led sanctions over its missile programme.

Since the start of the pandemic, North Korea has used tough quarantines and border closures to prevent outbreaks, though its claim to be entirely virus-free is widely doubted.

Elsewhere in his speech on Sunday, Kim did not make any specific comments about Washington and Seoul amid reports on Kim's speech marking the 76th anniversary of the founding of the ruling Workers' Party, the KCNA reported.

Nuclear negotiations between Washington and Pyongyang have stalled for more than two years over disagreements in exchanging the release of crippling US-led sanctions against North Korea and the North's denuclearisation steps.

The country has ramped up its missile testing activity in recent weeks while making conditional peace offers to Seoul, reviving a pattern of pressuring South Korea to secure what it wants from the US.

Earlier this month, North Korea's capital Pyongyang launched a string of missile tests in the span of a few weeks, which sparked international concern and prompted the UN Security Council to hold an emergency meeting.

The two Koreas signaled a surprise thaw in relations in late July by announcing the resumption of cross-border communications, which were severed more than a year earlier.

However, the détente was short-lived and North Korea stopped answering calls just two weeks later in response to Seoul staging annual military drills with the U.S.

In September, it launched what it said was a long-range cruise missile, and earlier this month it tested what it described as a hypersonic gliding vehicle, which South Korea's military said appeared to be in the early stages of development.

A UN rights investigator urged UN sanctions imposed for its nuclear and missile programmes to be eased earlier this month as North Ko9rea faces starvation.

The worsening humanitarian situation could turn into a crisis and it is coinciding with a global 'creeping apathy' about the plight of North Korea's people, said Tomas Ojea Quintana, UN special rapporteur on human rights in the Democratic People's Republic of Korea.

'Sanctions imposed by the UN Security Council should be reviewed and eased when necessary to both facilitate humanitarian and lifesaving assistance and to enable the promotion of the right to an adequate standard of living of ordinary citizens,' he said in a final report to the UN General Assembly, to be presented on October 22.

North Korea does not recognise Ojea Quintana's mandate or cooperate with him and its mission in Geneva did not immediately respond to a request for comment. The government in Pyongyang does not take questions from foreign media.

But many North Koreans relying on commercial activities along the border with China have lost their incomes, and that has been compounded by the impact of sanctions, Ojea Quintana said.

'People's access to food is a serious concern and the most vulnerable children and elderly are at risk of starvation,' he said, adding that North Koreans 'should not have to choose between the fear of hunger and the fear of Covid-19'.