A river of red-hot lava gushing from a volcano on La Palma is growing after the crater collapsed last night causing spectacular explosions. 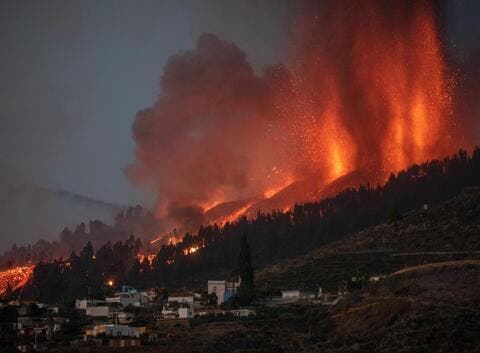 The north side of the volcano caved in on Sunday, causing a faster flow of lava to surge through the island. However, the molten rock followed a similar path to the previous lava flows and avoided causing further destruction.

The volcano emitted a loud booming noise and lava exploded with force from its crater as it spurted high above the Spanish island.

More earthquakes are continuing to rattle the island more than two weeks after the volcano first erupted.

It came just hours after Spain's Prime Minister Pedro Sanchez said he would help rebuild the island, adding that it was safe for tourists to visit.

Making his third visit to La Palma, one of the Atlantic Canary Islands, since the eruption began on September 19, Sanchez said the government would approve 206 million euros ($239 million) of aid funding this week.

The Cumbre Vieja volcano has destroyed around 1,000 buildings. About 6,000 people have been evacuated from homes on the island out of a population of some 83,000.

Canary Islands' regional president Angel Victor Torres said today: 'We had to order a few lockdowns because of the air quality, but we are not planning to evacuate more people.'

Torres said the volcano had emitted roughly three times the material expelled during the island's last major eruption in 1971, in a quarter of the time.

He added that his administration planned to buy around 300 houses to accommodate those who lost their homes and said it was too early to tell how great the total damage would be.

'We're still in the middle of this...if the lava keeps springing up in the same quantities we saw last night, the damage is going to be greater,' Torres said.

Cadena Ser radio said the collapse had formed a new lava flow that was threatening several nearby towns.

'A clear increase in effusive activity has been observed in the last few minutes,' the Volcanology Institute of the Canary Islands, Involcan, said earlier on Twitter.

Sanchez said: 'Next Tuesday, the cabinet will approve a package of very powerful measures [to assist in] areas such as infrastructure reconstruction, water supply, employment, agriculture, tourism and benefits.

'We are facing a test of resistance ... because we do not know when the eruption of the volcano will end.

'What residents should know is that when it does end, the government of Spain will be there to tackle the enormous task of rebuilding La Palma.'

A drone has captured the inside of the crater of the erupting Cumbre Vieja volcano on La Palma. pic.twitter.com/lMRBZjjPko

The financial package is the second stage of a plan approved last week. The first stage saw the government announce aid of 10.5 million euros ($12.3 million) for the immediate assistance of those who had lost their homes. 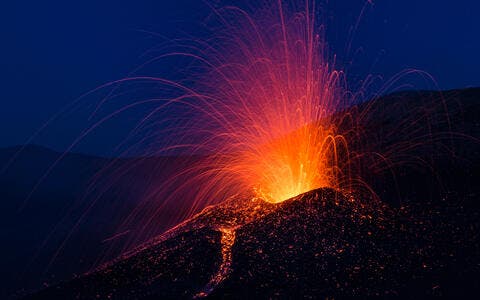 Sanchez also encouraged tourists who were considering visiting La Palma not to be put off. Tourism is the Canary Islands' major industry.

'I would like to let tourists know that this is a safe place, they can come and enjoy the island,' he said.