Published October 12th, 2021 - 08:27 GMT
A woman holds a sign showing a photo of a man reacting at the scene of the 2020 Beirut port blast on ther day, as protesters and family members of the 2020 Beirut port blast gather for a demonstration near the UNESCO palace in the Lebanese capital on August 12, 2021, ahead of a parliamentary meeting on the blast investigation. (Photo by ANWAR AMRO / AFP)
Highlights
An arrest warrant issued against Lebanese MP Ali Hassan Khalil. 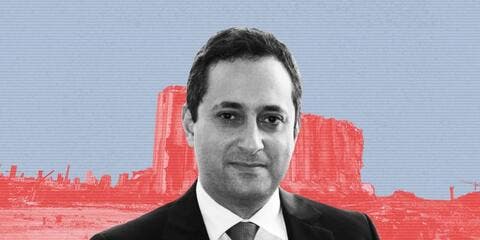 Bitar has issued the arrest warrant against the Lebanese MP Khalil after he failed to show up for the questioning session on Beirut's port blast probe.

Judge Tarek Bitar issued an arrest warrant for former finance minister and current parliament member Ali Hassan Khalil.Khalil was supposed to show up today for questioning but refused to do so.#BeirutBlast pic.twitter.com/WAuOz8PSuq

In the arrest warrant, Bitar wrote under the type of offense: "Killing, harming, arson and vandalism are all linked to the probable intent." He also added that police and army forces are allowed to arrest the person mentioned above.

Ali Hassan Khalil, who was sanctioned by the US government, is described as the "second most powerful man" in Amal behind Parliament Speaker Nabih Berri.

On 4 August 2020, a large amount of ammonium nitrate which was kept illegally at the Port of Beirut had exploded, causing at least 218 deaths and around 7,000 injuries.