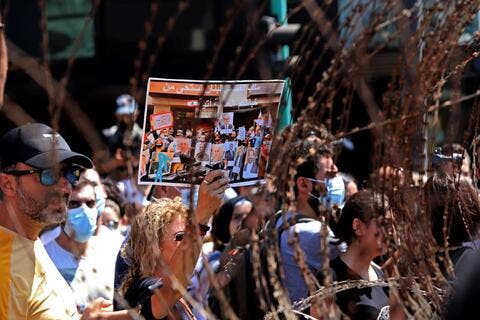 Sheikh Tamim said that the Qatari foreign minister will soon visit Lebanon “to offer aid and support,” the Presidency added.

HH the Amir met at the Amiri Diwan Office with HE President of the Lebanese Republic. #QNA pic.twitter.com/9pM4s99lhK

The two leaders agreed during the meeting that “the current stage requires the support of Arab countries for Lebanon” and that “overcoming any problem that might affect these relations is a necessity.”

The Presidency said that competent ministers from Lebanon and Qatar will hold meetings to study the discussed topics based on the agreements between the two countries.

Aoun and Sheikh Tamim also discussed the bilateral relations between the two countries and ways to improve them, the Presidency said, and Aoun welcomed any Qatari investment in Lebanon.

Aoun had told al-Raya Qatari newspaper, in remarks published Monday, that his visit to Qatar expresses “the depth of the friendship and the strength of the relation between the two countries.”

He also expressed gratitude for Qatar’s support for Lebanon after the Beirut port blast and praised Qatar’s diplomacy.