Libyan Rivals Are Talking Again But Where Will That Lead to?

Published June 13th, 2022 - 06:07 GMT
Deputy Special Representative of the UN Secretary-General for Political Affairs in Libya Stephanie Williams speaks during an interview with AFP at a hotel in the Tunisian capital Tunis, on March 26, 2022. (Photo by FETHI BELAID / AFP)
Highlights
Final round of talks between Libya’s rivals open in Egypt

UN Special Adviser on Libya Stephanie Williams on Sunday urged the country’s rivals to establish a constitutional framework within one week for holding elections in the conflict-ridden nation. 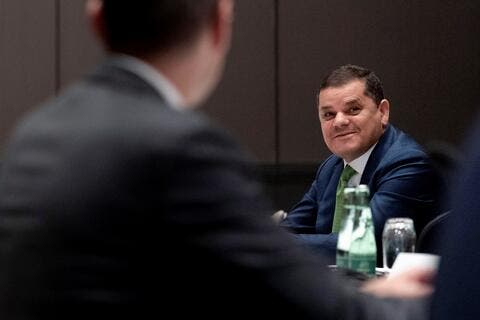 "This final round comes at a critical juncture for your country. After eleven long years of division, dysfunction, conflict, chaos and polarization, the Libyan people are exhausted," Williams said at the opening session of the third and final round of talks in Cairo, Egypt, between Libya's House of Representative (parliament) and the High Council of State, which acts as a senate.

#Libya:
UN envoy urges Libyan rivals to end differences ‘in a week’.
Final round of talks between Libya’s rivals open in Egypt https://t.co/2ZhrQncsiA via @anadoluagency

"Your Libyan compatriots look at you, expecting anxiously tangible results: a firm and consensual constitutional basis that will pave the way for holding transparent elections within the shortest timeframe possible," she added.

Williams also urged Libyans to "put down weapons,” adding that there are "spoilers" who will look to distrust the talks.

The final round of talks is expected to address 30% of the conflicting points, while the other 70% were addressed in the past rounds of the discussions.

For more than three months, there have been two governments in Libya: the national unity government in Tripoli led by Abdul Hamid Dbeibeh and the one granted confidence in early March by the Tobruk-based House of Representatives headed by former Interior Minister Fathi Bashagha.

Dbeibeh said he will only cede authority to a government that comes through an “elected parliament,” raising fears that the oil-rich country could slip back into a civil war.