Many People are Boycotting The Vote in Kashmir 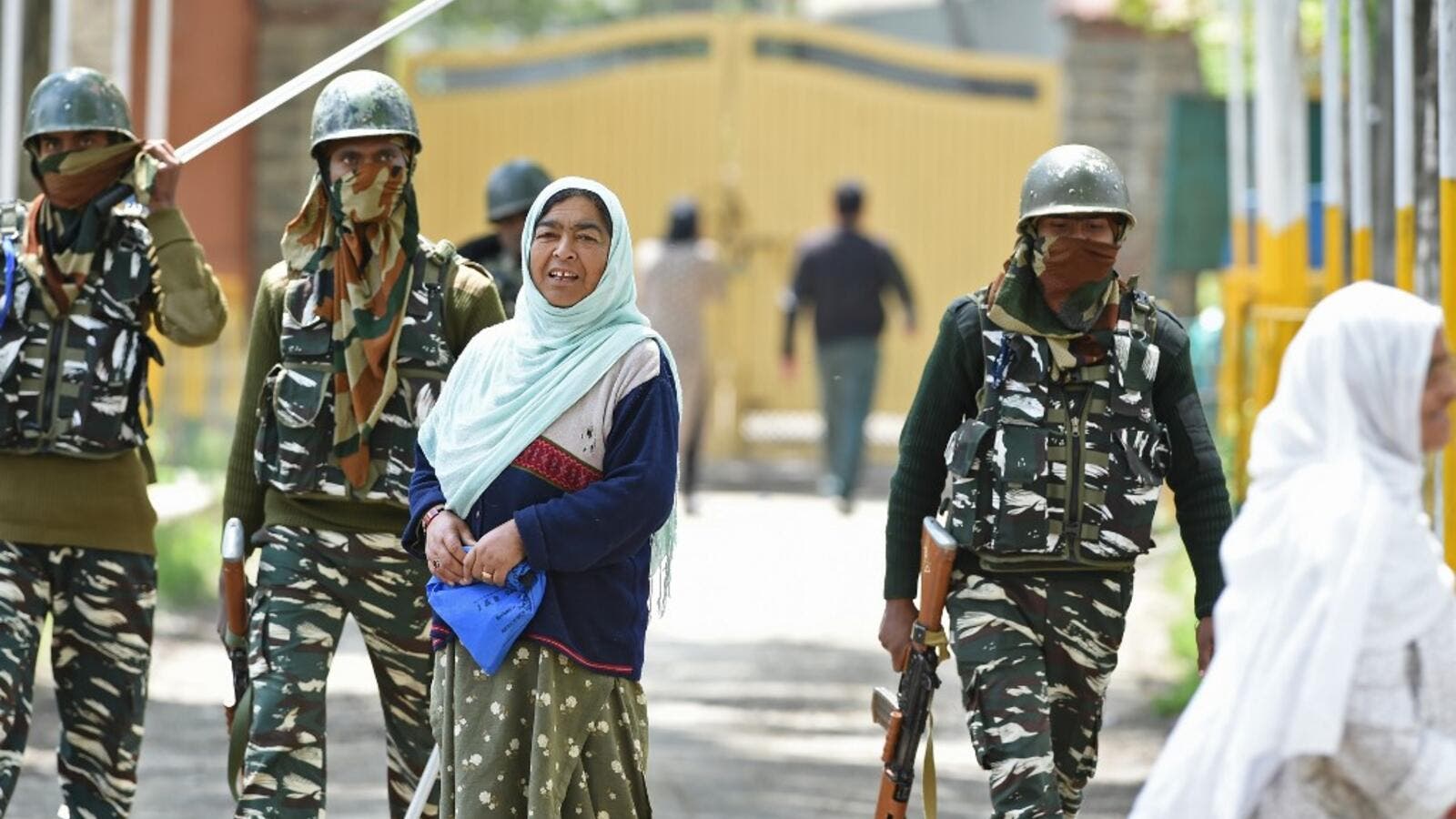 Indian paramilitary troopers patrol as a Kashmiri woman voter looks on in Srinagar (AFP)
Highlights
"Many people are boycotting the vote, heeding the call of pro-independence and separatist groups," Umar reported on Thursday.

Authorities poured security forces into India-administered Kashmir on Thursday as the disputed region took centre stage during the second round of India's enormous national election.

Tens of thousands of troops and police have been sent to the main city, Srinagar, which will be one of 97 constituencies across India to take part in Thursday's round of voting.

Separatists in India-administered Kashmir called for a boycott of the vote, who is in Srinigar, said is having the desired effect.

"Many people are boycotting the vote, heeding the call of pro-independence and separatist groups," Umar reported on Thursday.

He also reported that regional authorities had shut down the Internet across India-administered Kashmir.

Officials, speaking on condition of anonymity said that voter turnout was less than nine percent by early afternoon in central Kashmir’s three provinces of Srinagar, Budgam and Ganderbal.

There were small queues of voters in Ganderbal – a picturesque area of pine trees, streams and mustard fields – voting stations in Srinagar and some urban areas of Budgam looked deserted, Umar reported.

Kashmir has surged into Prime Minister Narendra Modi's campaign since a February bomb attack that killed 40 paramilitaries and brought India and Pakistan – both of whom administer part of disputed Kashmir – to the brink of war.

Since independence from Britain in 1947, Pakistan and India – both nuclear-armed nations – have fought two of their three wars over Kashmir, which is divided between the two but claimed by each in its entirety.

Most Kashmiris support rebel demands that their territory be united either under Pakistani rule or as an independent country, while also participating in civilian street protests against Indian control.

The latest deployment comes in addition to 500,000 troops that India has stationed in the region since 1989 when the popular armed revolt broke against New Delhi's rule.

Authorities have shut many roads in Srinagar and urged residents to avoid some parts of the city. Extra armed troops were deployed along streets and the banks of the river Jhelum.

Clashes between anti-India protesters and Indian troops and police were reported in at least six places of Budgam province, Umar said.

More than 157 million of the 900 million electorate are eligible to cast ballots on the second of seven days of voting in the world's biggest election.

Modi has put national security at the centre of his campaign to secure a second five-year term. While seen as the favourite, he faces an increasingly tough challenge from opposition Congress party leader Rahul Gandhi.

Gandhi has gone on a relentless attack against the economic record of Modi's Hindu nationalist Bharatiya Janata Party (BJP).

Thousands of candidates from more than 2,000 parties are competing for 543 seats in parliament. The last vote is on May 19 and final results will be released on May 23.

The first day of voting a week ago saw heavy turnout and security forces on high alert after a roadside bomb in Chhattisgarh, a central state where Maoist rebels operate, killed five people days before polls opened.

Insults and fake news have proliferated on social media during the campaign, and police squads have been on the hunt for money and gifts intended to sway voters to back certain parties.

Voting in a constituency in the southern state of Tamil Nadu was cancelled altogether after $1.5 million in cash was seized by authorities.

It is the first time a ballot has been cancelled during an election over suspected vote-buying, officials said.

Modi and the right-wing BJP swept to power in a 2014 landslide with their promise of "achhe din" ("good days").

He has simplified the tax code and made doing business easier.

But despite growth of about seven percent a year, Asia's third-biggest economy has not provided enough jobs for the roughly one million Indians entering the labour market each month.

And in rural areas, thousands of indebted farmers have killed themselves in recent years.

Critics say the BJP has also since sought to impose a Hindu agenda on India, emboldening attacks on Muslims and low-caste Dalits trading in beef  cows being holy for Hindus -- and re-writing school textbooks.

Gandhi, 48, who wants to become the fourth member of his family to take the prime minister's office, has accused Modi of causing a "national disaster".

Gandhi has pledged to end abject poverty by 2030 and give cash transfers to 50 million families, while the BJP has promi sed a $1.4-trillion infrastructure blitz to create jobs.

Modi, who has adopted the moniker "chowkidar" or "watchman" of the nation, has been addressing three rallies a day in a bid to drum up enthusiasm.

Danielle Hatem on COVID-19 Recession: How to Be Prepared!