Iraqi Shiite cleric Muqtada al-Sadr has appeared in a press conference on Tuesday calling his supporters to withdraw from the demonstrations saying that they have 60 minutes to leave the protests. 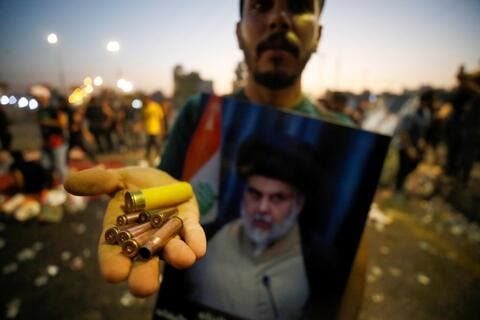 The Sadrist leader also urged his supporters to withdraw from the parliament building in the Green Zone refusing both peaceful and armed protests.

At least 30 people were killed and 700 others were injured in the latest clashes in Iraq following the announcement of al-Sadr leader on Monday to step down from political life.

According to news reports, supporters of the Shiite cleric started immediate withdrawal from the Green Zone minutes after the end of the press conference and the live fire also stopped.

Muqtada al-Sadr apologized to the Iraqi population and refused to answer any political questions.

Curfew, which was imposed across the country at 7 PM on Monday by Iraqi authorities, was lifted following the withdrawal of the Sadrist Movement supporters from Baghdad's Green Zone.