At least 30 people were killed, and 700 others were injured in Bagdad's Green Zone as clashes continue, a medical source revealed to Al-Jazeera. 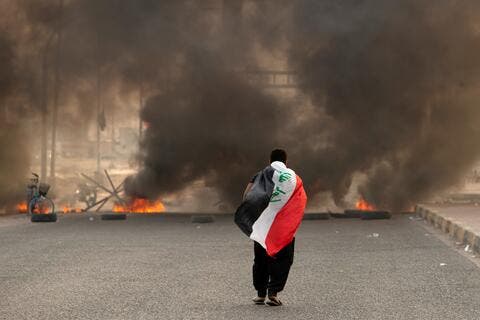 According to Iraqi sources, work was suspended across the country due to the curfew which was imposed by the Iraqi army on Monday at 7 PM as fighting continues following the announcement of Iraqi Shiite cleric Muqtada al-Sadr to completely resign political life.

Baghdad now this morning: A column of Saraya Alsalam force continues its advance towards the Green Zone, where clashes and chaos are witnessing and the spread of weapons controls the capital, Baghdad. #Baghdad #Iraq #المنطقة_الخضراء pic.twitter.com/SVoKRUNglK

Clashes were ignited on Monday between Muqtada al-Sadr's supporters called Saraya Al Salam, the Iraqi army, and men of the Hashed al-Shaabi, which is a former paramilitary integrated into the Iraqi forces.

Iraqi Prime Minister Mustafa Al-Kadhimi urged Muqata al-Sadr to call his supporters to immediately stop protests and withdraw from the Green Zone calling for national dialogue to solve the crisis.

Earlier yesterday, the US embassy in Iraq activated its anti-rocket system, known as C-RAM  amid continued clashes that led to the death of dozens and the injury of hundreds of others including 110 security personnel.