Myanmar at Risk of Falling Into a Civil War

Published June 20th, 2021 - 09:44 GMT
Protesters make the three-finger salute as they take part in a demonstration against the military coup and mark the birthday of Myanmar's detained civilian leader Aung San Suu Kyi in Yangon on June 19, 2021. STR / AFP

Months after Myanmar's military took power and plunged the Asian country into chaos and as the nation is facing an increasing risk of sliding into a civil war, the United Nations General Assembly has finally adopted a resolution, urging its member states to halt the flow of arms into Myanmar, a watered down version of an initial draft which called for a global arms embargo. 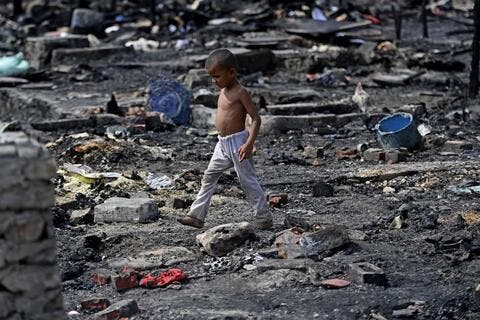 The 193-member body adopted the resolution on Friday, with the support of 119 countries, calling on “all member states to prevent the flow of arms into Myanmar.”

Only one country, Belarus, voted against it. 37 states abstained, including China and Russia.

The resolution also urged the military to immediately stop all violence against peaceful demonstrators, who have been holding daily rallies against the coup.

Since the military putsch on February 1, protesters have been demanding the restoration of civilian rule and the release of their civilian leader Aung San Suu Kyi and her associates, who have been under arrest ever since.

The mass rebellion has been met with a ruthless military crackdown that has killed over 860 people.

UN Secretary-General Antonio Guterres earlier pushed the body to act, saying, “We cannot live in a world where military coups become a norm. It is totally unacceptable.”

And UN special envoy on Myanmar Christine Schraner Burgener warned that “the risk of a large-scale civil war is real.”

"Time is of the essence. The opportunity to reverse the military takeover is narrowing,” he told the assembly on Friday.

European Union UN Ambassador Olof Skoog also said that the resolution “delegitimizes the military junta, condemns its abuse and violence against its own people and demonstrates its isolation in the eyes of the world."

General Assembly resolutions are not legally binding, though.

Some of those states that abstained from voting criticized the resolution for not adequately addressing the plight of Rohingya Muslims. Members of the minority group in their thousands were forced to leave their homeland due to the military-led crackdown against their community in 2017.

Thousands were killed, raped, tortured, or arrested in the crackdown, perpetrated with “genocidal intent,” according to the United Nations, which has described Rohingya as the most persecuted minority in the world.

Suu Kyi was at the time heavily criticized over her siding with the military in its violent campaign against the marginalized Muslim Rohingya community.

Many, wearing flowers in their hair, replicated Suu Kyi's  floral hairstyle and uploaded pictures onto social media across the nation.

In the country’s largest city, Yangon, protesters put up posters on power lines, wishing Suu Kyi a happy birthday and expressing solidarity with her.

"Happy Birthday Mother Suu. We are right behind you," the signs read.

Many also called for her release, while holding her pictures, alongside black umbrellas and banners that read "freedom from fear".”

Not all participants in the flower protest, however, were full of praise for the deposed leader.

The UN special envoy on Myanmar warned the 193-member UN General Assembly that “the risk of a large-scale civil war is real” in the country https://t.co/w8TB4ZxieA

"After she is free from her detention, she will have to take full responsibility over her silence concerning the suffering of Rohingya and other ethnic groups,” said a protester.

Suu Kyi appalled the international community in December 2019, when she traveled to the Hague to defend the military atrocities against the Rohingya people at the United Nations’ top court.

Her government had avoided even using the term Rohingya, instead referring to the minority ethnic group as “Muslims in Rakhine state.”

Recently, Myanmar's so-called National Unity Government (NUG), which includes many politicians from her party, called on the Rohingya to join hands to fight the junta in return for citizenship. 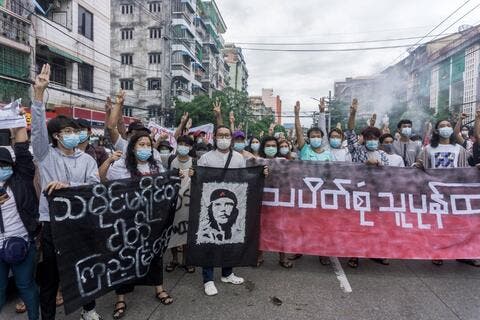 Myanmar's Aung San Suu Kyi in The Dock With Her Lawyers Expecting The Worse!

The NUG said it was committed to repatriating all Rohingya refugees in Bangladesh "as soon as repatriation can be accomplished voluntarily, safely and with dignity."

Many remain skeptical over whether the shadow government will recognize the citizenship and rights of the Muslim minority group. It has said, however, that attitudes were changing.