U.S. House Speaker Nancy Pelosi landed in Taiwan with a congressional delegation Tuesday in a visit that sparked a military response from the Chinese government. 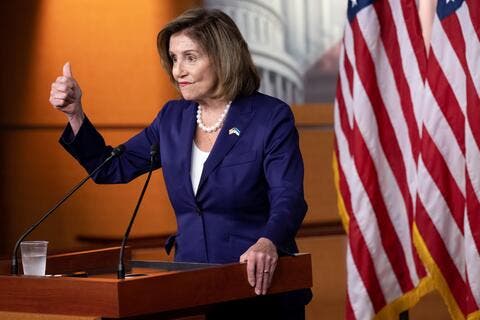 China responded visibly by sending 21 warplanes, including more than a dozen fighter aircraft, through Taiwan's air defense zone the day of Pelosi's visit.

After touching down aboard a U.S. Air Force Boeing C-40 Clipper, Pelosi, 82, became the highest-ranking U.S. official to make an official visit to the island since former Republican House Speaker Newt Gingrich in 1997.

Our visit reiterates that America stands with Taiwan: a robust, vibrant democracy and our important partner in the Indo-Pacific. pic.twitter.com/2sSRJXN6ST

The California Democrat defended her decision to visit Taiwan, despite stern warnings from the Chinese government.

"Some 43 years ago, the United States Congress overwhelmingly passed -- and President Jimmy Carter signed into law -- the Taiwan Relations Act, one of the most important pillars of U.S. foreign policy in the Asia Pacific. We cannot stand by as the [Chinese Communist Party] proceeds to threaten Taiwan -- and democracy itself," Pelosi wrote in an op-ed published in the Washington Post Tuesday.

"In the face of the Chinese Communist Party's (CCP) accelerating aggression, our congressional delegation's visit should be seen as an unequivocal statement that America stands with Taiwan, our democratic partner, as it defends itself and its freedom," Pelosi wrote.

"We cannot stand by as the CCP proceeds to threaten Taiwan -- and democracy itself."

Speculation had surrounded the unannounced visit for days, but was never confirmed ahead of Pelosi's Indo-Pacific trip, which began in Singapore and is scheduled to include Malaysia, South Korea and Japan.

Flightradar24, an app providing live radar tracking of Pelosi's flight temporarily crashed Tuesday due to a large number of users following it to see if the plane would indeed land in Taiwan.

"Our congressional delegation's visit to Taiwan honors America's unwavering commitment to supporting Taiwan's vibrant democracy," Pelosi said in a statement issued by her office after landing in Taipei.

In a statement, Pelosi said the visit was "focused on mutual security, economic partnership and democratic governance. Our discussions with Taiwan leadership will focus on reaffirming our support for our partner and on promoting our shared interests, including advancing a free and open Indo-Pacific region."

"America's solidarity with the 23 million people of Taiwan is more important today than ever, as the world faces a choice between autocracy and democracy," Pelosi said.

Though run by an independent government, China still claims the island as part of its territory.

Taiwan's military raised its level of combat readiness in response to exercises and live-fire drills by China ahead of Pelosi's visit, amid tensions between Beijing and Washington.

It is my great and humble privilege to accept on behalf of the Congress the Order of Propitious Clouds with Special Grand Cordon: a symbol of America’s strong and enduring friendship with Taiwan.

"These moves, like playing with fire, are extremely dangerous. Those who play with fire will perish by it," China's Ministry of Foreign Affairs said in a statement.

"Our visit is one of several congressional delegations to Taiwan -- and it in no way contradicts longstanding United States policy, guided by the Taiwan Relations Act of 1979, U.S.-China Joint Communiques and the Six Assurances. The United States continues to oppose unilateral efforts to change the status quo," Nancy Pelosi's statement said.

Pelosi had planned to make a stop in Taipei in April during a scheduled Asia tour, but the trip was canceled after she tested positive for COVID-19.

Washington's concerns over Beijing's plans for the democratic island of 23 million have grown in the wake of the Russian invasion of Ukraine and China has amplified military provocations against Taiwan in the past several months, with frequent incursions into the island's Air Defense Identification Zone.