NATO Secretary-General Jens Stoltenberg on Monday called on Russia to reduce tensions with Ukraine and warned Moscow against "any further provocation or aggressive actions." 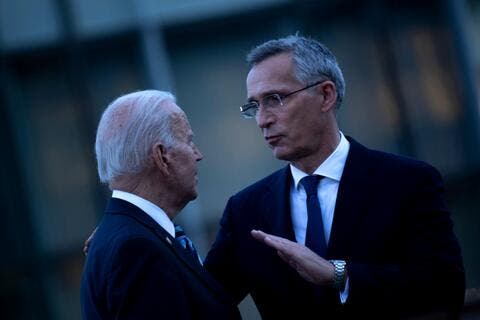 NATO is monitoring the "large and unusual concentrations of Russian forces close to Ukraine's border," Stoltenberg said during a joint press conference at NATO headquarters in Brussels with Ukrainian Foreign Minister Dmytro Kuleba.

NATO Secretary-General Jens Stoltenberg said on Monday a Russian military build-up near Ukraine's border was dangerous because it reduced the amount of warning time. https://t.co/a75WjjTTCS

"NATO stands with Ukraine," Stoltenberg said, calling on Russia to be transparent about its military activities. "We do not, and will not, accept Russia's illegal and illegitimate annexation of Crimea. and we call on Russia to end its support for militants in the Donbas. All NATO allies are united in their condemnation of Russia's behavior."

The Biden administration is monitoring the buildup of Russian forces near the border with Ukraine, which Secretary of State Antony Blinken said was reminiscent of Russia's 2014 invasion of Crimea. CIA Director Bill Burns traveled to Moscow to address the tensions in the region.

Stoltenberg said he couldn't go into details about intelligence regarding the military buildup, but said NATO should be "clear-eyed" and "realistic about the challenges we face."

"We know that Russia has been willing to use these types of military capabilities before to conduct aggressive actions against Ukraine," he said.