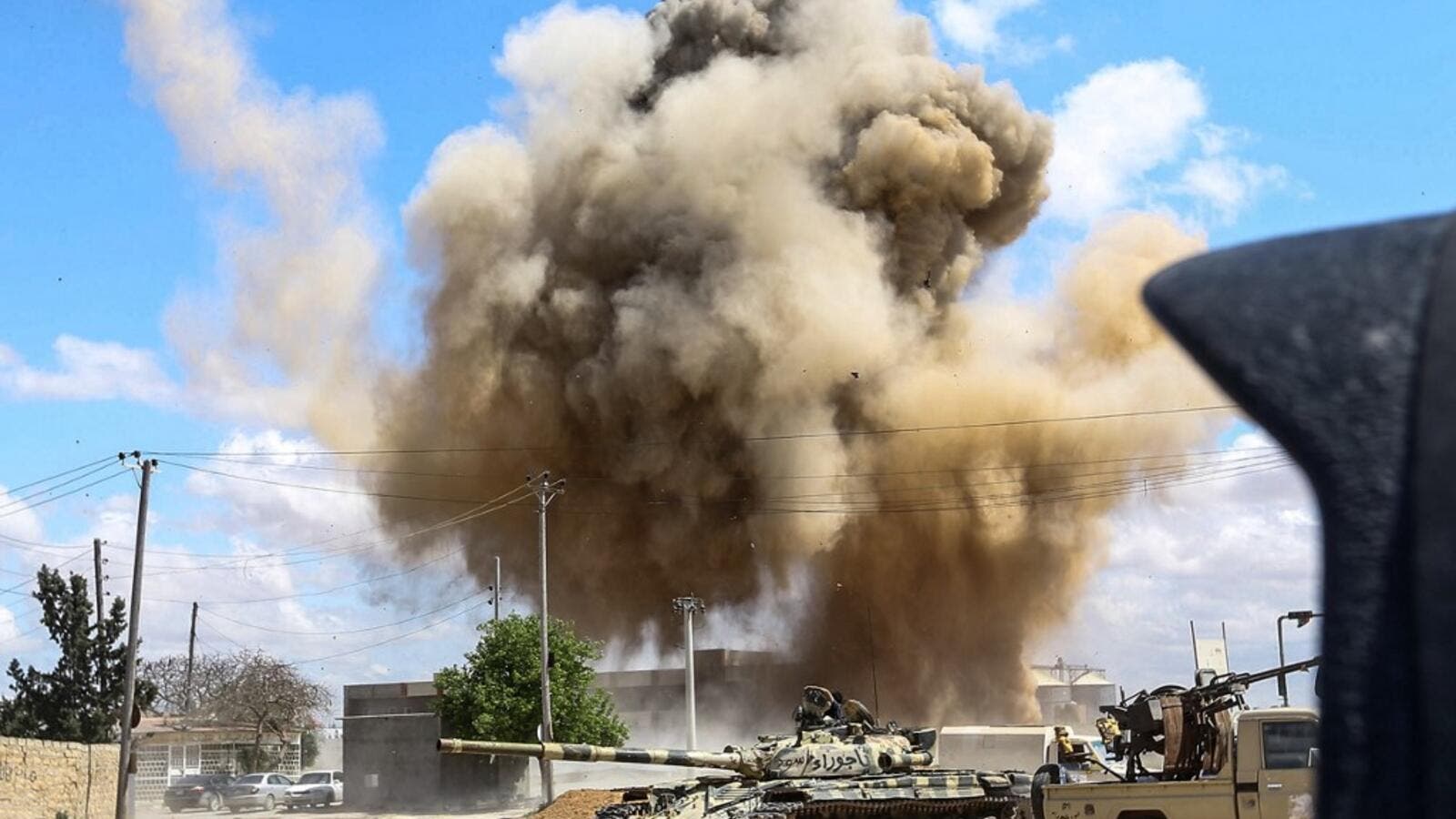 Smoke plume rising from an air strike behind a tank and technicals (pickup trucks mounted with turrets) belonging to forces loyal to Libya's Government of National Accord (GNA), during clashes in the suburb of Wadi Rabie about 30 kilometres south of the capital Tripoli. Mahmud TURKIA / AFP

The current Libyan civil war is benefiting the terrorist group ISIS, according to one expert on the region.

The sides in the civil war “which were fighting ISIS are now fighting each other,” said Tarek Megerisi, a policy fellow with the North Africa and Middle East program at the European Council on Foreign Relations.

This gives ISIS “the opportunity to entrench itself and to return to its previous form,” he warned, speaking at a NATO meeting in the Turkish Mediterranean.

It could again become “a very real threat, a potential chaos that we saw back in 2014 which ISIS gain a foothold in the country, caused the migration crisis, which I think Europe still suffers from,” he added.

“It only took three days from the start of the war for ISIS to launch their first attack, invade small towns of Libya, and I think they had two more attacks in the state.”

Lawmakers, officials, military leaders, and foreign mission chiefs from NATO member states are among the participants at the meeting, set to end Sunday.

Last week, military commander Khalifa Haftar, affiliated with a government based in eastern Libya, launched a campaign to capture the capital Tripoli, where Libya’s UN-backed Government of National Accord (GNA) is based.

Since the 2011 ouster of late President Muammar Gaddafi, two seats of power have emerged in Libya: one in eastern Libya, and another in Tripoli, which enjoys UN's support.

Other fronts in Libyan civil war

Megerisi said if Haftar’s Tripoli offensive is defeated, his forces could take the fight to eastern Libya.

“They are already contemplating opening up other fronts in southern and eastern Libya.”

“The state of war reverses all the other small successes that Libya might have enjoyed over the last two years,” he added.

Megerisi argued that the international support Haftar has gotten over the last four years “has given him ae sense of impunity.”

“It’s a great example of one of the problems of policy approaches in Libya over the last four or five years, where we desperately try to solve the symptoms of Libya’s underlying chaos and conflict without effectively targeting what the drivers are.”

“Haftar, like many others in Libya, is a non-state actor,” said Megerisi.

“In 2014 and 2015, Libya formed a Government of National Accord, supported by the UN, and this was done to be the vehicle through which to solve Libya’s problems.”

Megerisi said the idea to build up a Libyan institutional capacity for solving problems “wasn’t the best approach, considering that these are urgent problems that demand urgent solutions.”

Creating this vehicle and forming direct partnerships with various non-state actors led to the conflicts now plaguing Libya, he said, adding: “It never got the opportunity to develop an institutional capacity to solve these problems.”

He explained: “Instead, various malicious forces were empowered, strengthened, be they Khalifa Haftar, those who are now fighting them, or criminal people smuggling gangs, which at one time found themselves on the UN sanctions list while at the same time engaging with European missions, to help boost their capacity in dealing with the smuggling problem.”

Characterizing the Tripoli-based government as a “weak entity,” he said: “It has no force of its own, no army of its own.”