Published August 15th, 2022 - 05:20 GMT
Salman Rushdie, who spent years in hiding after an Iranian fatwa ordered his killing, was on a ventilator and could lose an eye following a stabbing attack at a literary event in New York state on August 11, 2022. (Photo by JOEL SAGET / AFP) 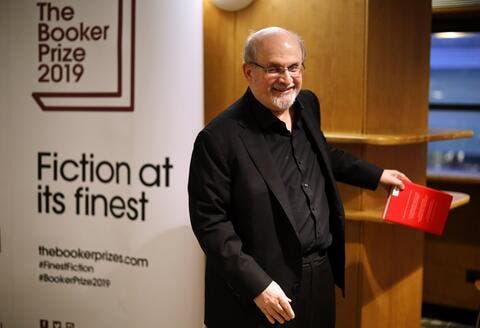 Doug and I were appalled by the attack on author Salman Rushdie this week. People should be able to share ideas without fear—the basis of any free and open society. Violence and hate have no place.

Renowned author Rushdie, who faced death threats over his book 'The Satanic Verses', was stabbed on stage in Western New York state.

The Booker prize-winning author was attacked as he was about to give a lecture in western New York state.

Rushdie has suffered years of death threats over his book 'The Satanic Verses' which was severely criticised by Islamic clerics.

Earlier, a bounty of as high as USD 3 million was also declared for anyone who kills Rushdie.

The interviewer with Rushdie was also attacked during the incident and he suffered a minor head injury.

"On August 12, 2022, at about 11 am, a male suspect ran up onto the stage and attacked Rushdie and an interviewer. Rushdie suffered an apparent stab wound to the neck, and was transported by helicopter to an area hospital. His condition is not yet known. The interviewer suffered a minor head injury. A State Trooper assigned to the event immediately took the suspect into custody. The Chautauqua County Sheriff's Office assisted at the scene," it added.

CNN citing a Chautauqua spokesperson said medical staff and police were called to the amphitheatre.

The seventy-five-year-old author hogged the limelight with his novel 'Midnight's Children' in 1981. The India-born author won Booker Prize for the novel which was also adapted for the stage.

"Words are not violence. Violence is violence."https://t.co/Ld6uBapr3z

But his 1988 book 'The Satanic Verses' led to a fatwa, a religious decree, by the then Iranian revolutionary leader Ayatollah Ruhollah Khomeini. The threat forced him into hiding for several years.

Rushdie's books have been translated into several languages.

Meanwhile, Hadi Matar, who is suspected of stabbing Rushdie, pleaded not guilty to attempted murder in the second degree and other charges in a New York court.

This article is adapted from its original source