Nigerian is Desperate Not to Free The Islamic Movement Leader Zakzaky

A well-known Nigerian lawyer and human rights activist said that the state government filed a new charge against Sheikh Ibrahim Zakzaky, whom is the chief of the Islamic Movement in Nigeria, and his wife in a desperate move to block their release. 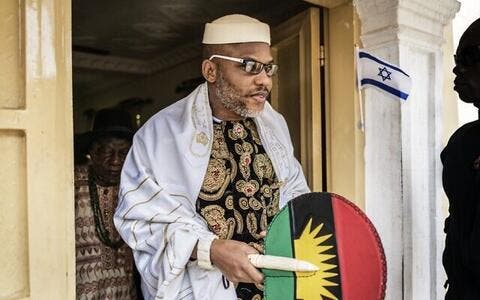 Will Nigeria Fall Into a New Civil War?

Femi Falana, who led Sheikh Zakzaky’s defense team, said in a Sunday statement that contrary to reports that a new charge of terrorism and treasonable felony was filed after the Kaduna State High Court ordered the release of the elderly couple, it had been “hurriedly filed” on July 26 – two days prior to the ruling -- in a desperate bid by the Kaduna state government to “frustrate the release of the defendants from further incarceration.”

“In other words, the new charge was maliciously filed when the Kaduna state government anticipated that the ruling fixed for July 28 in respect to our no-case submission would succeed,” Falana was quoted by local media.

Shaykh Ibrahim Zakzaky, leader of the Islamic Movement of Nigeria, and his wife Zeenah Zakzaky have been released from detention after the courts dropped all charges and acquitted them.

The lawyer further underlined that as soon as the new charge was filed, “the bailiff of the federal high court was commanded to rush to the Kaduna correctional center to serve same on the defendants.”

“But the defendants refused to accept service of the charge and directed the bailiff to serve it on them through their Counsel. But for reasons best known to the Kaduna state government, the charge was not served on the defense counsel,” Falana noted.

The development came after the high court in Nigeria’s central state of Kaduna on Wednesday acquitted Sheikh Zakzaky and his wife, Mallimah Zeenat, of all the charges leveled against them back in 2015 and ordered them released.

The trial originally commenced on May 15, 2018, but dragged on for over three years, when the high court – presided by Judge Gideon Kurada -- eventually issued its final verdict on July 28.

“At last, we defeated them. we won,” the couple’s jubilant attorney Ishaq Adam Ishaq said on Wednesday, adding, “They have gained their freedom. They are now freed and with us.”

The couple were on trial on an eight-count phony indictment of alleged culpable homicide, disruption of public peace and unlawful assembly among others. They had pleaded not guilty to all the charges.

Further slamming state government efforts to block the release of Zakzaky and his wife, Falana added, “In apparent disregard of the epochal judgment of the Honorable Justice Gideon Kurada, the Kaduna state government seeks to subject the defendants to trial under the Terrorism Prevention Act enacted in 2011 for offenses that were allegedly committed as far back as 2008.

“But since the Kaduna state government is not sure that the defendants would be convicted for terrorism, the Director of Public Prosecution, Mr. Bayero, has announced that an appeal would be filed at the Court of Appeal against the Ruling of the Honorable Justice Gideon Kadura,” he emphasized.

Falana, however, said the new charge or filing of the appeal would have no effect on the release of the defendants.

“Since the new charge has failed to achieve its oppressive objective of frustrating the release of the couple from further incarceration, we call on the Kaduna state government to discontinue it without any delay,” the lawyer said.

#Zakzaky, leader of the Islamic Movement of #Nigeria, had been in prison without trial since 2015https://t.co/CsVkn4lTLn

Calling the hearings that had led to their charges “a kangaroo court that was politically-charged,” the head of the Islamic Human Rights Commission in London added, “There was no basis to it. And there was no other way except for him to be discharged, both him and his wife.”

The government “failed to prove any case whatsoever like the previous time,” he said.

In December 2015, Nigeria’s military launched a crackdown as part of a deadly state-ordered escalation targeting the Islamic Movement in Nigeria that Abuja has branded as illegal.

The campaign saw the troops attacking Zakzaky’s residence in the town of Zaria in Kaduna, afflicting him and his wife with serious injuries that reportedly caused the cleric to lose his left eye.

During the crackdown, the military also attacked the movement’s members as they were holding religious processions, with the government alleging that the Muslims had blocked a convoy of the country’s defense minister.

The violence led to the death of three of Zakzaky’s sons and more than 300 of his followers.