South Korean officials said that North Korea fired two ballistic missiles into the sea between Korea and Japan on Wednesday,  just days after Pyongyang announced that it had successfully conducted cruise missile tests. 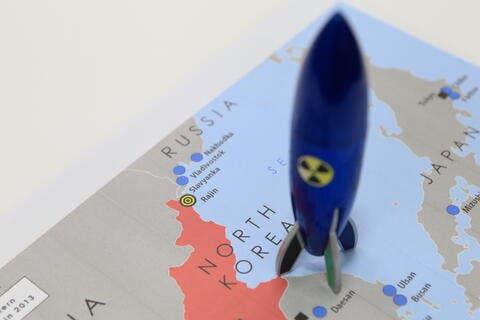 South Korea's military detected two short-range ballistic missiles that flew a distance of around 500 miles at a maximum altitude of 37 miles, the Joint Chiefs of Staff said in a text message sent to reporters.

The missiles were launched at 12:34 and 12:39 p.m. from Yangdok, a county located in south-central South Pyongan Province.

"Specifications are being analyzed in detail by South Korea and U.S. intelligence agencies," the JCS said. "We are maintaining a full readiness posture and closely cooperating with the U.S."

The U.S. military said it is aware of the reports of the tests and is monitoring the situation with its South Korean and Japanese allies.

"While we have assessed that this event does not pose an immediate threat to U.S. personnel or territory, or to our allies, the missile launch highlights the destabilizing impact of the DPRK's illicit weapons program," Hawaii-based U.S. Indo-Pacific Command said in a statement.

Japanese Prime Minister Yoshihide Suga called the test-firings "outrageous" and said that they "threaten the peace and security of Japan and the region."

Suga said that the missiles appeared to land in the sea outside of Japan's exclusive economic zone. He added that Tokyo will "strengthen its vigilance and surveillance."

The launches come just two days after North Korea announced that it had successfully conducted tests of a long-range cruise missile that analysts believe may be capable of carrying a nuclear warhead.

The latest tests coincide with a visit to Tokyo by Washington's top North Korea envoy, Sung Kim, who held a trilateral meeting with his Japanese and South Korean counterparts on Tuesday.

Kim said after that meeting that Washington "continues to reach out to Pyongyang to restart dialogue" and remains open to meeting without preconditions.

Nuclear negotiations have been stalled since a February 2019 summit between then-President Donald Trump and North Korean leader Kim Jong Un ended without an agreement.

Chinese Foreign Minister Wang Yi was also on a diplomatic visit to Seoul on Wednesday, where he met with his is counterpart Chung Eui-yong and President Moon Jae-in in Seoul to discuss ways to bring North Korea back to the negotiating table.

Pyongyang had been relatively quiet since its last known weapons test in March, when it fired off two short-range ballistic missiles. On Thursday, North Korea held a military parade, its first during the administration of President Joe Biden, although the relatively low-key affair did not show off any new weapons.