One in Every 3 Covid Deaths Worldwide is in India

Published May 11th, 2021 - 08:22 GMT
Relatives prepare the body of a person who died due to the Covid-19 coronavirus during the funeral at a burial ground in New Delhi on May 11, 2021. Money SHARMA / AFP
Highlights
Covid deaths passed 3.3M people and infected hit nearly 159M globally. 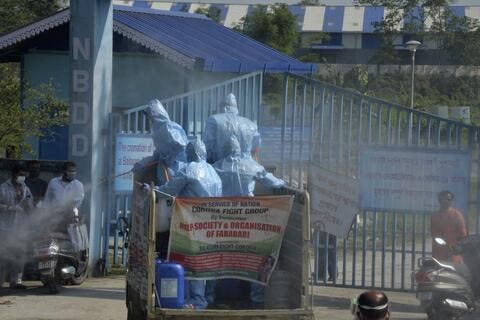 India's coronavirus crisis has showed scant sign of easing, with a seven-day average of new cases at a record high and international heath authorities warning the country's variant of the virus poses a global concern.

India's daily virus cases rose by 329,942, while deaths from the disease rose by 3,876, according to the health ministry. India's total coronavirus infections are now at 22.99 million, while total fatalities rose to 249,992.

India leads the world in the daily average number of new deaths reported, accounting for one in every three deaths reported worldwide each day, according to a Reuters tally.

The World Health Organization said the coronavirus variant first identified in the country last year was being classified as a variant of global concern, with some preliminary studies showing that it spreads more easily.

Eighteen people have died from the virus respiratory disease outside of hospitals in Japan's Osaka Prefecture, officials said, amid calls for tougher restrictions on movement to halt a fourth wave of infections ahead of the Olympics.

All but one of the deaths occurred since March 1 as highly infectious strains of the virus caused a spike in new cases, the prefecture reported late on Monday for the first time.

The rise in virus deaths at home is a sign of the stress Japan's hospital system is under as the country struggles to bring the latest surge in infections under control, with more than 96 percent of Osaka Prefecture's critical care beds occupied.

The Philippines has detected its first two cases of a virus variant first identified in India, its health ministry said.

The variant had been confirmed in two Filipino seafarers who returned in April from the United Arab Emirates and Oman, Alethea De Guzman, director of the ministry's epidemiology bureau, told a news conference.

Australia's Victoria on alert after first case in two months

Australia's Victoria state has reported a locally acquired Covid-19 case for the first time in more than two months, sending authorities searching for the source of the infection.

A man in his 30s, who recently returned from overseas and had completed his hotel quarantine in South Australia state, tested positive for the virus on Tuesday morning, authorities said.

The infected person started developing flu-like symptoms over the weekend after reaching Victoria last Tuesday, the health department said in a statement.

Venezuela's academy of medicine asks US to donate vaccines

Venezuela's main academy of medicine has asked the United States to add the South American nation to its international donor list for millions of doses of Covid-19 vaccines, despite a political freeze between the two countries.

Enrique Lopez-Loyo, president of the politically independent National Academy of Medicine, made the request to US Ambassador to Venezuela James Story at a meeting on May 2, the academy said in a statement on Monday.

"To control the pandemic in our country, we need to vaccinate around 70 percent of the adult population, nearly 15 million people, in as little time as possible," the academy said in the statement.

China has reported 14 new virus cases for May 10, up from 11 a day earlier, the national health authority said.

The National Health Commission, in a statement, said all of the new cases were imported infections originating from overseas. The number of new asymptomatic cases, which China does not classify as confirmed cases, rose to 25 from 18 cases a day earlier.

The total number of confirmed virus cases in Mainland China now stands at 90,783, while the death toll remained unchanged at 4,636.

US biotech firm Novavax ha said that it had delayed plans to seek authorisation for its Covid vaccine candidate, a setback for developing countries hoping the injection would soon be available.

The company now hopes to file for authorisation in the US and Europe in the third quarter of 2021, it said in a statement, sending shares tumbling 12 percent.

Novavax's vaccine is key to the Covax program, which was set up to try to ensure poor countries have equitable access to vaccines to combat the virus pandemic.

US authorises Pfizer/BioNTech vaccine for children 12 to 15

US regulators have authorised Pfizer and BioNTech's Covid-19 vaccine for use in children as young as 12, widening the country's inoculation programme as vaccination rates have slowed significantly.

The vaccine has been available under an emergency use authorisation to people as young as 16 in the United States. The vaccine makers said they had started the process for full approval for those ages last week.

The US Food and Drug Administration said it was amending the EUA to include the millions of children aged 12 to 15.

Brazil has recorded 25,200 confirmed cases of the coronavirus in the past 24 hours and 889 fatalities from Covid-19, the Health Ministry said.

That raised the total number of confirmed cases in Latin America's largest country to 15,209,990 and the official death toll to 423,229 on Monday. 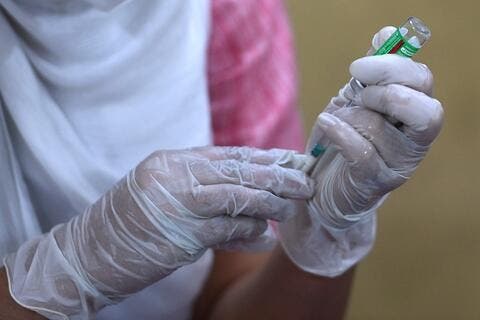 Indians Stand Together Amid Covid-19 Crisis

Mexico's Health Ministry has reported 704 new confirmed coronavirus cases and 104 more deaths, bringing the total number of cases in the country to 2,366,496 and fatalities to 219,089.